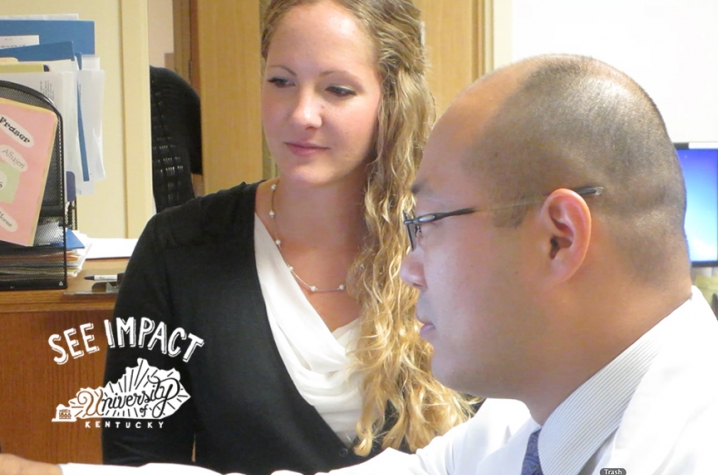 "I played competitive soccer through high school and continue to play recreationally," says Koehl, a doctoral candidate in the University of Kentucky's Department of Psychology, "so I have firsthand experience with the dynamics that come into play when a teen suffers a concussion."

As a former high school assistant principal in the Chicago public school system, Han was responsible for overseeing student-athletes' return to school after a concussion. Han left educational administration to pursue his doctorate in neuropsychology. Now director of the Multidisciplinary Concussion Program at UK HealthCare, Han has a reputation for top-notch clinical work and research on concussion.

"There aren't many places in Kentucky where you find a true multidisciplinary concussion program," Han says. "UK HealthCare's Multidisciplinary Concussion Program embraces an interdepartmental group effort -- from neurology, from neurosurgery, sports medicine, physical medicine and rehabilitation, from the trauma team -- we all work together to look at how brain injury affects the cognitive, physical and emotional state of our patients."

This group effort puts the athlete's safety first. For that reason,  UK HealthCare's concussion program is the go-to for the athletics programs at Fayette County Public Schools, the University of Kentucky, Eastern Kentucky University, and Kentucky State University, who all rely on the UK Multidisciplinary Concussion Program's clinical expertise in sports concussion for state-of-the-art input to help make decisions affecting an athlete's return to play.

Add to Han's clinical skills a lifelong love of full contact martial arts (Han practices kickboxing and Brazilian jujitsu), and it's easy to see how Han and Koehl are well-suited to study the symptoms of sports concussions.

Drawing from a large UK database of patients with brain injury, Koehl and Han used a subset of 37 athletes aged 12 to 17 to explore post-concussion changes in physical, emotional, and cognitive symptoms over time.

There were no differences between the two groups in factors such as what percentage experienced loss of consciousness, amnesia, nausea and/or headaches, indicating that the groups were likely comparable in the level of severity of concussion.

In other words, said Koehl, "This research gives us a better understanding of the interaction between physical and emotional symptoms in concussion and will allow us to explore ways to help adolescents recover in a more timely fashion."

"While these findings are preliminary and require a larger sample size to predict outcomes with more confidence, we are intrigued by the potential these data offer in terms of providing teens with a better treatment plan based on their unique cognitive, physical and emotional response to concussion," Han said.

"Identifying factors that affect a teen's experience after concussion may help in planning for the appropriate treatment and in making decisions about when to return to play and what accommodations are needed at school during recovery.”

To view captions for this video, push play and click on the CC icon in the bottom right hand corner of the screen. If using a mobile device, click on the "thought bubble" in the same area.