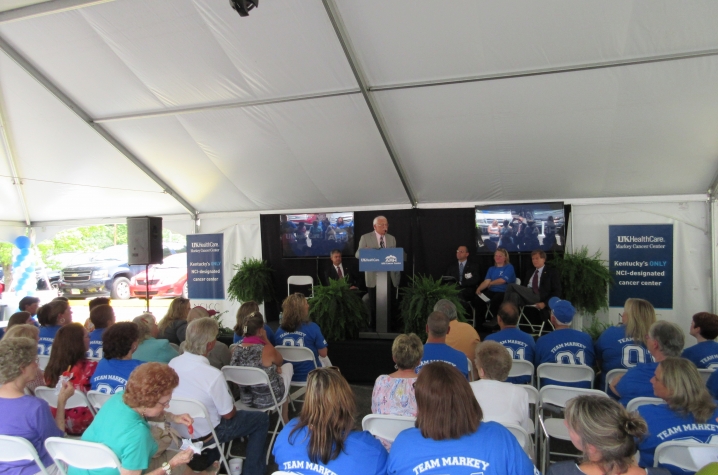 LEXINGTON, Ky. (July 24, 2014) – Eastern Kentucky faces some of the highest rates of cancer incidence and mortality in the nation, but two hospitals in the Appalachian Regional Healthcare (ARH) system are stepping up the fight against cancer. Williamson ARH Hospital in South Williamson, Ky. and Harlan ARH Hospital have announced a new affiliation with the University of Kentucky Markey Cancer Center, the state's first and only National Cancer Institute-designated cancer center.

"ARH is consistently working to build a new level of health care for the people we serve in eastern Kentucky and southern West Virginia by providing our communities local access to some of the most advanced health care services," said ARH President and CEO Joe Grossman. "This affiliation with the UK Markey Cancer Center will further enhance the services provided in Williamson and Harlan and will help us ensure our residents receive only the best oncology care right here at home in conjunction with a team of nationally recognized medical professionals."

"We are so pleased to announce our affiliation with the Markey Cancer Center, and we believe this new relationship will allow us to provide better care for our patients," said Dr. Walid Baz, medical director of hematology and oncology services for Williamson ARH Hospital. "Most cancer patients require multimodal therapy including surgery, chemotherapy, radiation and psychosocial therapy. Working together will enable the medical staff to leverage their collective experience, and that experience combined with Markey's specialized treatment, technology and clinical trial opportunities will help us take cancer care to the next level. This is great news for cancer patients and their families in our community."

The UK Markey Cancer Center Affiliate Network was created to provide high-quality cancer care closer to home for patients across the region, and to minimize the effects of cancer through prevention and education programs, exceptional clinical care, and access to research.

The ARH hospital system is the largest provider of health care in southeastern Kentucky. By joining the UK Markey Cancer Center Affiliate Network, Williamson ARH Hospital and Harlan ARH Hospital will be able to offer their patients access to additional specialty and subspecialty physicians and care, including clinical trials and advanced technology, while allowing them to stay in southeastern Kentucky for most treatments. The Markey Cancer Center Affiliate Network supports UK HealthCare's overall mission of ensuring no Kentuckian will have to leave the state to get access to top-of-the-line health care.

"UK HealthCare doesn't just serve Lexington and Central Kentucky – our mission is to provide all Kentuckians with the best possible care right here in the state," said Dr. Michael Karpf, UK executive vice president for health affairs. "The Markey Cancer Center Affiliate Network allows us to collaborate with community hospitals to provide top-notch cancer care much closer to home -- saving both travel expenses and time for the patients, in addition to keeping them close to their personal support system."

Markey is one of only 68 medical centers in the country to earn an NCI cancer center designation. Because of the designation, Markey patients have access to new drugs, treatment options and clinical trials offered only at NCI centers.

"The burden of cancer in Kentucky is huge, particularly in Eastern Kentucky," said Dr. Mark Evers, director of the UK Markey Cancer Center. "That's why I am thrilled to have Williamson and Harlan join the Markey Affiliate Network. By working together, we have the potential to make a serious impact on cancer care in the part of the state that needs it the most."

The UK Markey Cancer Center Affiliate Network began in 2006 and includes 11 hospitals across the state of Kentucky:

Evaluations are under way for four other hospitals, including two more outside the state of Kentucky, extending Markey's reach and establishing it as the destination cancer center for the region.