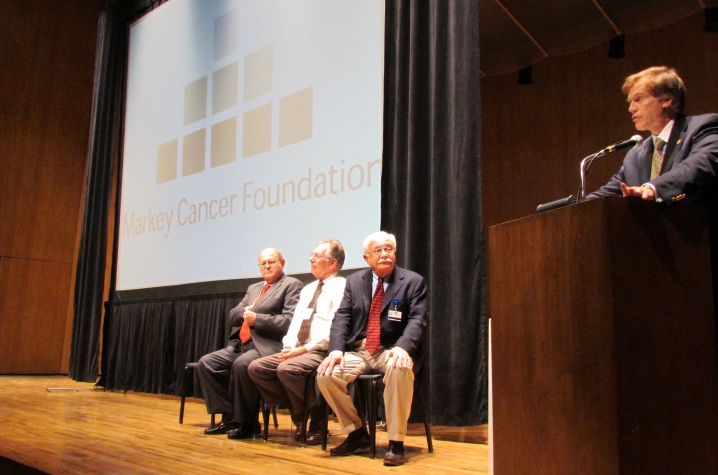 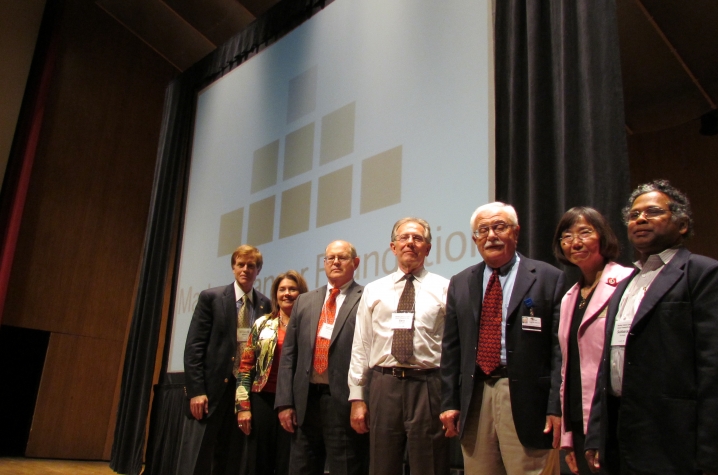 LEXINGTON, Ky. (May 17, 2012) — The University of Kentucky Markey Cancer Center has received more than $6 million to study a deadly blood and bone marrow disease often caused by chemotherapy or radiation treatments. A $5 million grant from the Edward P. Evans Foundation, along with a $1.25 million donor gift, will fund research of myelodysplastic syndrome (MDS).

The Evans Foundation grant will fund five research labs over five years, including three labs at UK, one at Cincinnati Children's Hospital, and one at the University of Arkansas. The $1.25 million gift, given to UK through the Markey Cancer Foundation by an anonymous donor, will also fund the laboratories.

"This transformational gift from the Evans Foundation and the donor’s generous matching gift will support and further clinical and investigative research efforts which are fundamental in our goal to serve not only as a comprehensive regional cancer center but also a nationally recognized leader in cancer care," said Dr. Michael Karpf, UK executive vice president for health affairs.

A major risk factor for MDS is past exposure to chemotherapy or radiation treatments — in other words, patients who have received treatment for solid tumors, particularly breast or prostate cancers, have a much higher chance of developing this disease. Edward P. Evans, namesake of the foundation, was a Virginia businessman and thoroughbred owner who raced and sold his horses here in Lexington, Ky. He developed MDS after he received radiation treatment for prostate cancer and ultimately succumbed to the disease. In his will, he appointed four trustees to create the Edward P. Evans Foundation with the specific goal of funding MDS research.

The Edward P. Evans Foundation released the following statement in regards to awarding the research grant: “We are excited to encourage cooperation among organizations engaging in research related to diseases like myelodysplastic syndrome, leukemia and chronic fatigue syndrome. It takes professionals with significant experience in creating a process to foster the Evans Foundation’s goals in medical research. We found such a cooperation in the consortium being headed up by the University of Kentucky’s Markey Cancer Center scientists.”

"We are incredibly excited to be able to supplement the $5 million Evans grant with this generous $1.25 million gift through the Markey Cancer Foundation," said Dr. Randall Rowland, director of the Foundation. "It shows how much faith the community has in the work our researchers are doing every day. This gift will help them make major strides in preventing this terrible group of diseases."

These researchers are the only ones who will specifically look at how to determine biomarkers for MDS prior to any type of cancer treatment. The ability to predict who may be at a higher risk for MDS will allow physicians to tailor cancer treatments to reduce the chance of developing the diseases later on in life.

"Our researchers are some of the best in the country, and receiving the Evans grant and the gift are further proof of that," said Dr. Mark Evers, director of the UK Markey Cancer Center. "The $6.25 million in funding has the potential to help us make a huge difference in the lives of those patients who are most at risk for developing myelodysplastic syndrome. As we move towards applying for National Cancer Institute Designation, leading-edge research like this will become more and more of a focus for the Markey Cancer Center."

Myelodysplastic syndrome affects the way the body produces blood cells. Normally, the bone marrow makes blood stem cells that develop into mature blood cells over time. With MDS, the blood stem cells do not mature. These immature blood cells do not function normally and either die in the bone marrow or soon after they enter the blood. With fewer blood cells available, an infection, anemia, or easy bleeding may occur. Once MDS develops, it can progress into leukemia, and it is largely untreatable.

"At UK, our research will start with basic science and progress to translational science. One of our first steps will be to figure out what can cause these changes in bone marrow that lead to myelodysplastic syndrome," said Van Zant, professor and director of the Clinical Stem Cell Laboratory for the UK Bone Marrow Transplant Program. "From there, our focus will be how we can predict which patients may be at a higher risk to get the disease if they receive chemo or radiation, and ultimately, how we can better treat those patients who have already developed myelodysplastic syndrome."