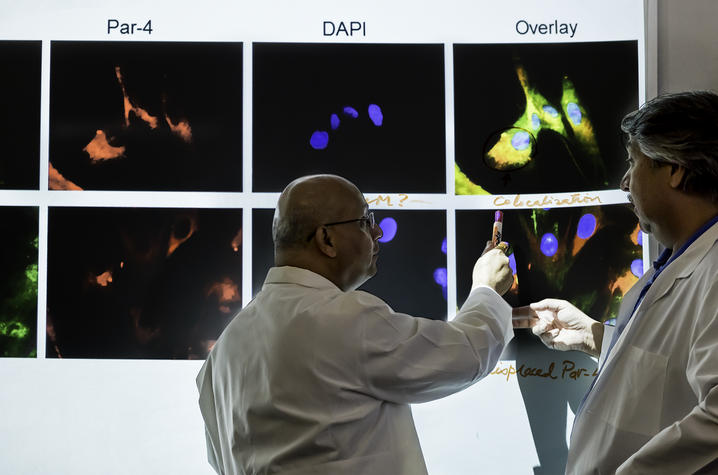 LEXINGTON, Ky. (Jan. 17, 2017) – A new study by University of Kentucky Markey Cancer Center researchers shows that chloroquine – a drug currently used to treat malaria – may be useful in treating patients with metastatic cancers.

Published in Cell Reports, the study showed that chloroquine induced the secretion of the tumor suppressor protein Par-4 in both mouse models and in cancer patients in a clinical trial. Secreted Par-4 is essential for tumor cell death and the inhibition of tumor metastasis.

Chloroquine induces Par-4 secretion via the classical secretory pathway that requires activation of p53 (a mutation of the p53 protein, or disturbances in the pathways that signal to p53, is common in many cancers). Mechanistically, p53 directly induces Rab8b, a GTPase essential for vesicle transport of Par-4 to the plasma membrane prior to secretion. The study’s findings indicate that chloroquine induces p53- and Rab8b-dependent Par-4 secretion from normal cells for Par-4-dependent inhibition of metastatic tumor growth.

The study was led by the lab of Vivek M. Rangnekar, the Alfred Cohen endowed chair in oncology research at the UK Markey Cancer Center and a professor in the UK Department of Radiation Medicine. UK Researchers Ravshan Burikhanov and Nikhil Hebbar in Rangnekar’s group were co-first authors in the study.

“Because p53 is often mutated in tumors, it makes the tumors resistant to treatment,” said Rangnekar, also the co-leader of the Cancer Cell Biology and Signaling research program and associate director at Markey. “However, this study shows that the relatively safe, FDA-approved drug chloroquine empowered normal cells – which express wild type p53 – to secrete Par-4 and stop metastasis in p53-deficient tumors.”

At the UK Markey Cancer Center, one clinical trial using chloroquine for Par-4 induction in a variety of cancer patients is ongoing. Researchers are now planning a second clinical trial that would involve giving a maintenance dose of chloroquine to patients who are in remission, with the hopes of preventing cancer relapse.

This research was funded with grants from the National Institutes of Health and the UK Markey Cancer Center/Center for Clinical and Translational Science. Researchers from the University of Pittsburgh, Kansas University Cancer Center, and Osaka University in Japan collaborated with UK scientists in this study.