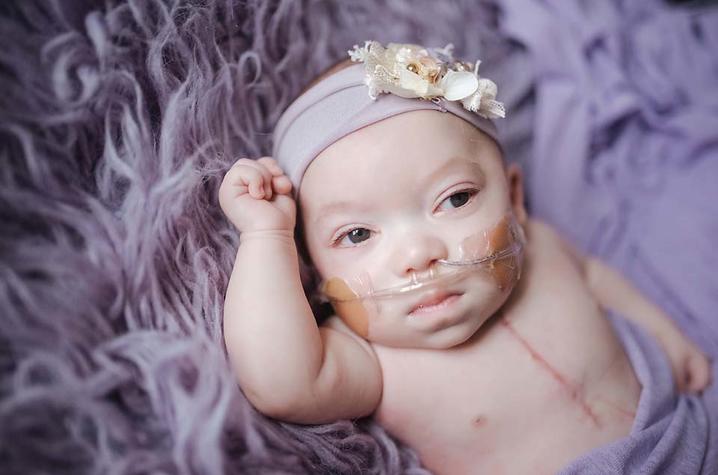 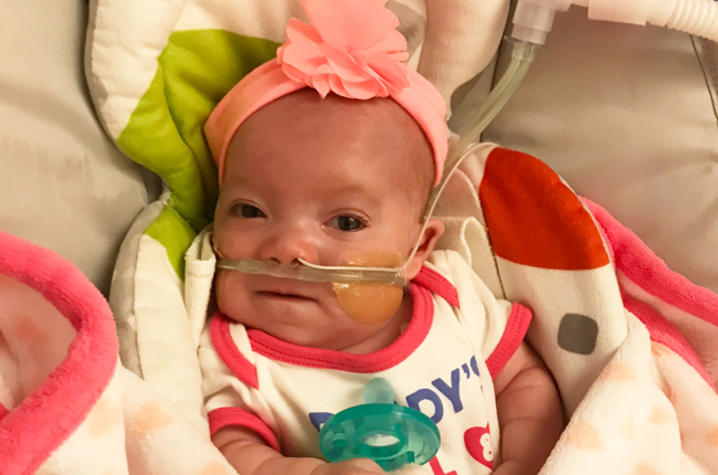 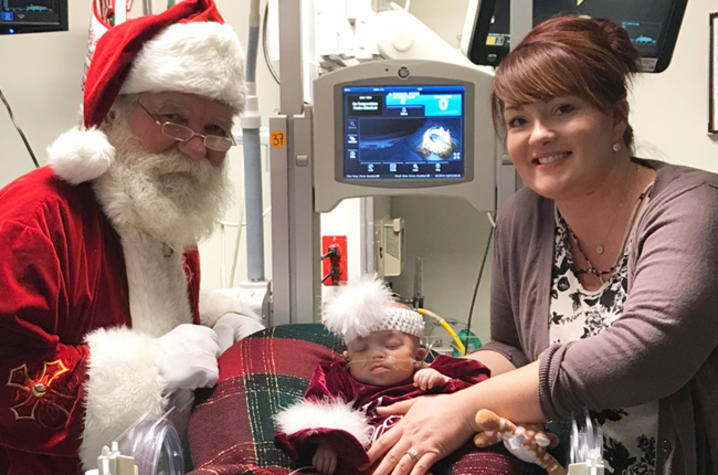 LEXINGTON, Ky (May 9, 2019) – Crystal Brown was having a textbook pregnancy. All prenatal exams and tests showed that her baby girl was growing on schedule. Until she wasn't.

A routine ultrasound at 27 weeks showed Crystal's baby was a week behind in growth. For Crystal and her husband Curtis, that didn't sound like such a big deal. They were referred to a diagnostic center in Lexington, over an hour away from their home in Stanford, for further tests. The results weren't good.

"I asked the doctor if he was looking at the right chart," said Crystal. "We had no prior indication that anything was wrong."

The diagnostic scans showed intrauterine growth restriction, meaning the baby was smaller than expected for its gestational age. Crystal's baby wasn't getting any nutrition from the placenta, and therefore wasn't growing.

A week later, Crystal had an emergency c-section. Her baby, Caralina, was born on July 13, 2018, three months early, and weighed only one pound, 11 ounces. She was transferred to UK's Betti Ruth Robinson Taylor Neonatal Intensive Care Unit which became the Browns' home away from home for the next six months.

Premature babies face a number of issues, from underdeveloped lungs to retinopathy, a condition characterized by disruption of the growth in the blood vessels of the eye. In the low-oxygen environment of the womb, the blood vessels grow from the center of the developing retina starting at the 16th week of gestation. When a baby is prematurely removed from the womb, the blood vessel growth is disrupted and the retina can detach from the rest of the eye, leading to permanent blindness. In October, Caralina had laser treatments and injections to correct the retinopathy, and while the condition has regressed, she's likely to have some vision issues such as limited peripheral vision.

"It is thought that babies who are born premature can only withstand so much treatment, but in my clinical experience babies are more resilient than parents realize," said Dr. Muralimohan Palla, one of the doctors who cared for Caralina in the NICU. "Caralina was one such example of resilience."

But Caralina's biggest challenge was yet to come.

Tetralogy of Fallot is a rare but serious condition caused by a combination of birth defects in the heart. In Caralina's case, she had a large hole in the wall that separates the heart's lower chambers called a ventricular septal defect. In a healthy heart, the right side pumps blood to the lungs to get oxygen, and the left side pumps the oxygen-rich blood back to the rest of the body. A hole between those two chambers allows the oxygenated blood to mix with the deoxygenated blood, which makes the heart have to work harder to provide enough oxygen to other tissues in the body.

"A condition like this, children have what is called 'failure to thrive,'" said Dr. James Quintessenza, chief of pediatric cardiothoracic surgery. "The heart circulation is so inefficient. Babies burn so many calories trying to get the blood flowing that they aren't gaining weight."

So on Dec. 10, at five months old, little Caralina had open heart surgery to patch the hole.

For Crystal and her husband, the stress was nearly unbearable. Three months after Caralina was born, Crystal had to go back to work, limiting the number of hours she could spend at the hospital over an hour away. She and her husband would often have to leave work early to be present for Caralina's procedures and treatments. And with two other children at home, the stress was compounded.

"It was hard, between the kids at home and having normalcy for them, and our baby, who wouldn't have anybody there," said Crystal.

Crystal relied on the nurses and staff at UK Kentucky Children's Hospital to look after Caralina on days she couldn't be there. She became so close to the nurses that she learned their work schedules, and who would be there on any given day.

"Mrs. Brown had full trust in our NICU team, and was very confident that her little one was a fighter," said Dr. Palla.

On Christmas Eve, 165 days later, Crystal got the best Christmas present all - Caralina got to go home.

"It was an extra special Christmas," Crystal said. "I didn't have time to shop for the kids, and family, friends and the community chipped in and helped shop for my family. And getting to bring Caralina home was the icing on the cake. It was the best Christmas ever."

After a few weeks of post-surgery sternum precautions, Caralina is happy and healthy. Heart surgery delayed some of her developmental milestones, but she's growing and thriving. And as Mother's Day approaches, Crystal looks forward to celebrating an extra special day with Caralina.

"God first made me a mommy in 2009, and I have enjoyed so many wonderful Mother’s Days since, but this year is extra special for me," said Crystal. "Just when I thought I had it all figured out, she came along and has taught me even more about motherhood. She has showed me that life is so precious it’s worth fighting for."

Though she is a mother to two other children, it was Caralina who changed Crystal's outlook on motherhood.

"She’s the strongest girl I know, and has overcome so much," said Crystal. "I have seen Grace through her eyes and I have developed even more patience and balance than I thought I could ever have. Caralina has definitely showed our family a true miracle in the making, and sometimes you have to just slow down and take it one day at a time. I am blessed beyond measure to be their mommy."