LEXINGTON, Ky. (March 13, 2018) – When two little girls from India arrived at the International Adoption Clinic at Kentucky Children's Hospital for their post-adoption health screening, they were nervous and unable to communicate with the doctor and their new parents. But then a face appeared on a screen, and spoke to them in Hindi. The girls lit up at the sound of their native language.

The "face on the screen" was the Video Remote Interpreter (VRI), one of nine units used in UK HealthCare's pediatric clinics for interpretation for non-English speaking patients and their families.

"The VRI units are a newer tool for us at UK, and Pediatrics is the first division to really take the initiative to deploy to the units," said Sarah Hesler, manager of language services for UK HealthCare. "Video interpreting is a great option for our providers and families."

UK HealthCare currently employs a number of interpreting services for patients, including staff interpreters, dedicated phone interpreters and translated written material. But there are occasions when those options can't address a patient's need. A patient may speak a language or dialect not spoken by a staff interpreter. The phone interpreter may have trouble understanding who is speaking, especially when there are multiple family members in the room. And the written materials aren't conducive to two-way communication and patients may not have a way to express additional questions or concerns. The VRI units are designed to support existing interpreting services and fill in those gaps.

"I think one advantage [the VRIs have over phones] is the way kids interact with it," said Matthew Horn, ambulatory director for UK HealthCare Pediatrics. "Most kids are used to iPads now, so having this on an iPad makes the child a little more comfortable. Especially if the face on the screen looks like them."

UK clinics contract their phone and video interpreting to Cyracom, a company that specializes in medical translation for patients and doctors. Phone and video calls are routed to one of Cyracom's contact centers, where interpreters are available for more than 220 languages by phone and 40 by video.

"You might be surprised that we have that need in Lexington," said Hesler. "But last year we saw over 90 spoken languages at UK."

In 2017, there were over 130,000 visits across UK HealthCare's eight pediatric clinics, 8 percent of which required language services. With the success of the VRI units in the Twilight Clinic, UK's after-hours primary care clinic for children and adolescents, the units were introduced in the other pediatric clinics. And because the VRI units are on wheels, language services can be delivered more consistently as the patient moves, for example, from the exam room to X-ray without any lapses in communication.

"After [the VRI units] worked so well in the Twilight Clinic, we decided to roll it out everywhere," said Horn. "The physicians have been very pleased, and it's much easier than having to lug the telephone around."

Since these units operate in the pediatrics, the staff have given them names and costumes to make them more fun and engaging for children. "Dr. Rosetta Stone" serves the adolescents' clinic, "Pedro" can be found at Kentucky Clinic South, while "Kevin the Minion" works hard in the Pediatric Specialty Clinic.

"'Kevin' is a frequent flyer - we use him during busy surgery clinics to expedite triage when the Spanish interpreter has not yet arrived," said Horn. "He has proven to be a hit for other dialects that are not available in-person. We used him recently for a family who spoke with a Rwanda dialect. Both the family and the patient were impressed with the interpreter."

As the VRI units prove to be effective, the staff of Language Services hope to expand to the rest of UK's hospitals and clinics.

"The whole thing costs about $1,000, but once we have it, it's no more expensive than using the phone," said Hesler. "It just offers a better service for everybody."

"We have an obligation, legally, to provide language access to patients and families," said Hesler. "It is also essential for safety, quality and equity that we can understand and be understood. And by giving their clinics video as an accessible option, pediatrics really demonstrates a commitment to superior patient communication and care." 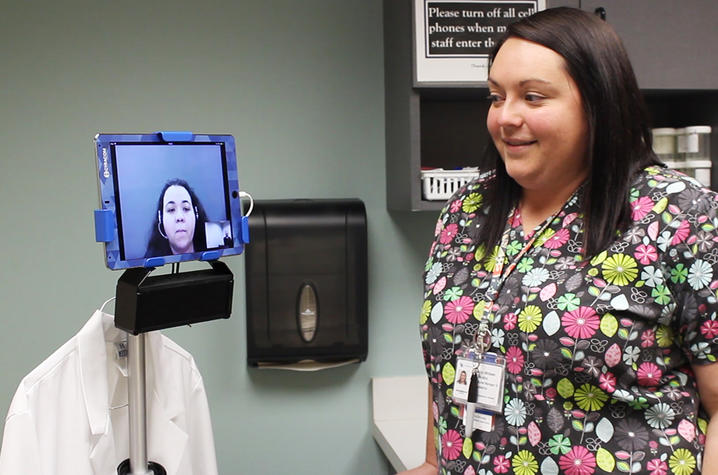 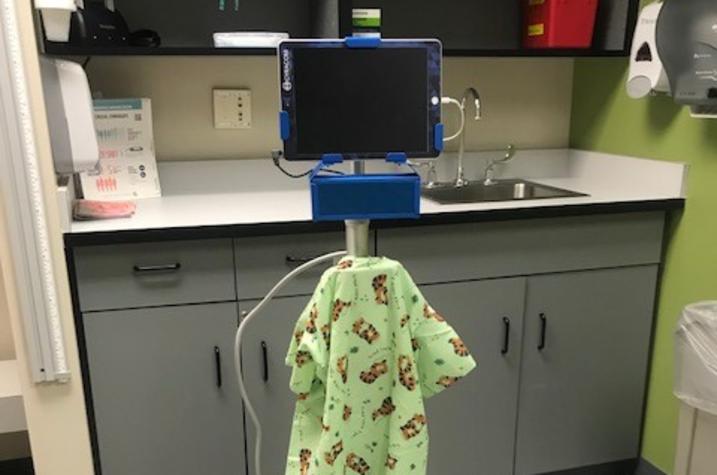