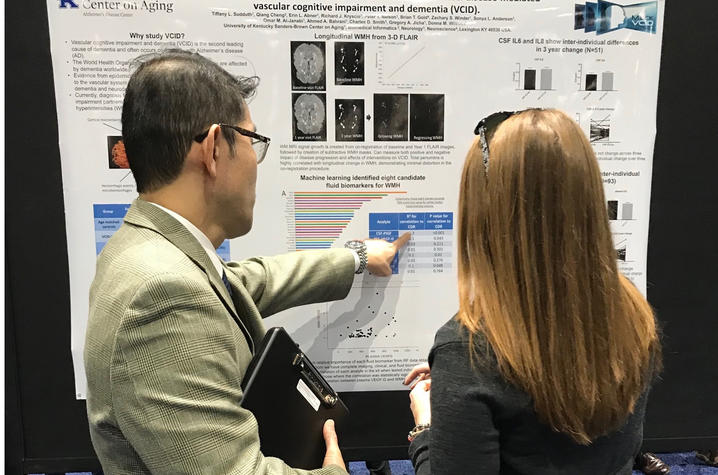 LEXINGTON, Ky. (Nov. 7, 2018) — Research at the University of Kentucky Sanders-Brown Center on Aging has identified two potential ways to predict vascular cognitive impairment and dementia (VCID) – the second leading cause of dementia behind Alzheimer's disease.

VCID results from injuries to the vessels that supply blood to the brain, including mini-strokes, and/or by risk factors that are also known to cause heart disease or stroke:  high cholesterol, smoking, high blood pressure and/or diabetes. About 10 percent of all dementia cases are caused by VCID, while Alzheimer's accounts for between 60 and 80 percent. Sometimes Alzheimer's and VCID can occur simultaneously, which is termed mixed vascular dementia.

Currently, diagnosis for VCID is limited to clinical signs of dementia and/or MRI imaging, which is expensive and usually too late in the disease process to treat effectively.

"Without a definitive method to diagnose VCID early in disease progression, we can't proceed to the next step, which is to identify treatments," said Donna Wilcock, Ph.D., Sweeney-Nelms Professor at Sanders-Brown and co-PI with Dr. Greg Jicha. "Since most people develop some level of VCID as they age, the ability to identify and treat this disease will have a profound impact on the health and independence of our aging population."

Sanders-Brown researcher Tiffany Lee analyzed 29 proteins in cerebrospinal fluid and blood plasma from 115 individuals with cognitive impairment.  From that, she was able to identify a collection of seven features that predicted cognitive impairment with an 86 percent accuracy.

Three additional features provide a 50 percent predictive value for white matter hyperintensity volume, which is one measure of damage to the brain’s blood vessels that can cause VCID.

The study, which was selected as a "Hot Topic" for the Society for Neuroscience's annual meeting last weekend, was funded by a $3.6 million grant from the NIH's National Institute of Neurological Disorders and Stroke that established the Small Vessel VCID Biomarkers Consortium (MarkVCID) two years ago.

Sanders-Brown was one of just seven sites selected for the five-year NIH NINDS (National Institute of Neurological Disorders and Stroke) grant.  The other sites are Boston University, Rush University, Johns Hopkins, University of Southern California, UCSF/UC-Davis and the University of New Mexico.

"The next steps are to cross-validate these findings through the Consortium and, if the data holds true, submit an application to the FDA approval," said Lee. "If all goes according to plan, this test might be available for use by 2025."