"I don't remember what the drive was," said Day. "But I knew that's what I was going to do."

Day hails from Smilax, a small town in Eastern Kentucky which, according to Day, consists of "a post office and a grocery store." His father was a coal miner and his mother stayed home with Day and his brother.

"I'm very proud of the place where I grew up," said Day. "My brother and I had the most loving parents in the world."

After graduating from Leslie County High School, Day found himself at a crossroads. He was offered a full scholarship for music, yet the calling to be a doctor he felt at the age of five led him to Hazard Community College. From there, he went on to University of Kentucky as an Otis A. Singletary Scholar in what is now the UK Lewis Honors College. Day graduated with a degree in biology in the UK College of Arts and Sciences, then continued his studies at UK College of Medicine.

He never regretted the decision to pursue medicine. While in medical school, he met his wife and together they graduated with medical degrees from UK and continued their medical training all over the United States. In 2011, Day was invited to interview for a position at UK HealthCare, an interview he almost skipped.

"My son and I were at the airport in Los Angeles waiting for our flight to Lexington while one of the worst snowstorms in the last 20 years was hitting the eastern part of the U.S.," Day recalled. "I called my wife and said it probably wouldn't work out in Lexington because we hadn't been there in years, and I had interviews at other hospitals where I wanted to be. Then all of a sudden, they announce my name over the loudspeaker; they had two seats on a flight to Lexington."

When Day and his son arrived, what they saw was an astounding transformation.

"I called my wife and said 'this place has changed.' When I went to school here, the hospital was two or three little buildings. Now it's this massive campus. Where there were multiple restaurants on the corner is now this huge hospital, with academic and research facilities and construction all over campus."

Day joined the pediatric critical care team in 2011 and was appointed physician-in-chief of Kentucky Children's Hospital (KCH) and chair of the Department of Pediatrics in early 2019. He is responsible for the operation and administrative oversight of KCH and its academic, education and research components.

As a native of Kentucky, Day is aware of some of the preconceived notions people have about the state. "A lot of people who have not been in Kentucky will say, 'it's a little different, isn't it?' Yeah, it’s a little different, but that’s good, we're about advancing science. We're about advancing research. We're about becoming one of the top hospitals in the country. But we're also about taking care of patients and families first."

"There are so many wonderful physicians, nurses, respiratory therapists, child-life staff that I get to lead that many times I wake up in the morning and I ask myself, 'how did I end up here? How am I at a place where I get to lead  where the mission is really taking care of the issues that affect the state?'"

Kentucky has been hit hard by the opioid crisis and ranks among the worst for child abuse, obesity, diabetes and cancer. KCH staff and UK researchers work across disciplines every day to address these health disparities.

"Athletics uses the term 'big blue nation,' and that it really is that feeling," said Day. "And it's the pride of being from Kentucky. Yes, we have some statistics. Yes, we have issues we need to work on. But I'm at a place that's working on those issues each and every day."

UK HealthCare has become a world-renowned facility for cutting edge treatment and research. At the core, Day says UK is doing what is best for the people of Kentucky, and that starts with treating children, a mission that Day is humbled and honored to undertake.

"What is a bigger honor than for somebody to trust their child in my care?" said Day. "Because I have children, and I know how I would feel. There's not a bigger honor." 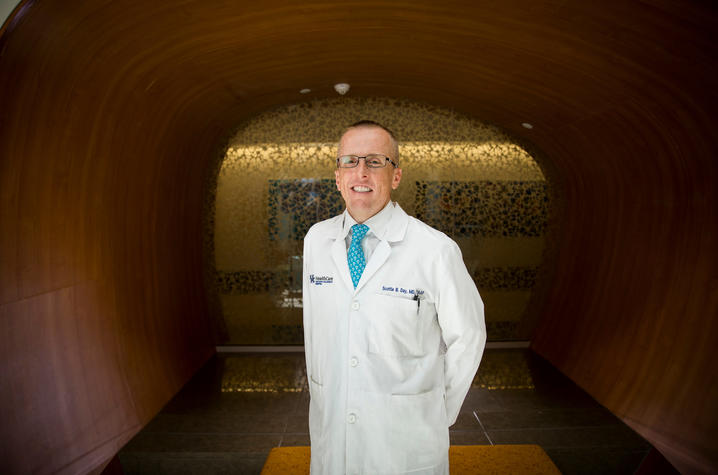