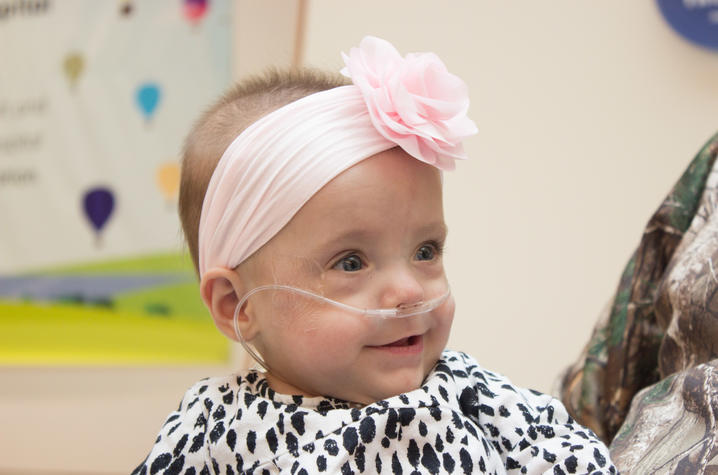 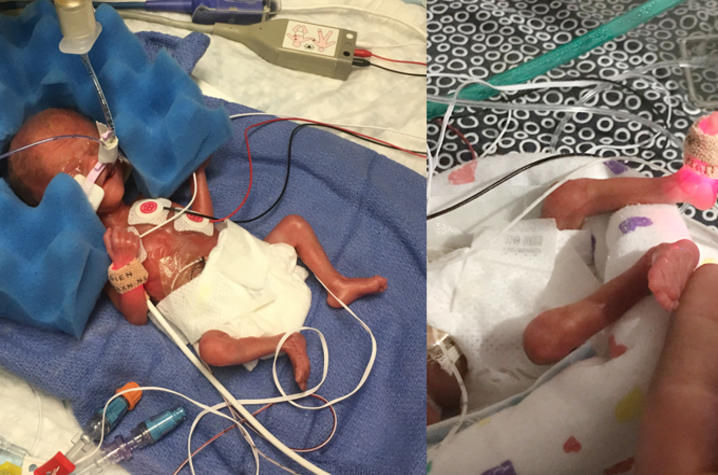 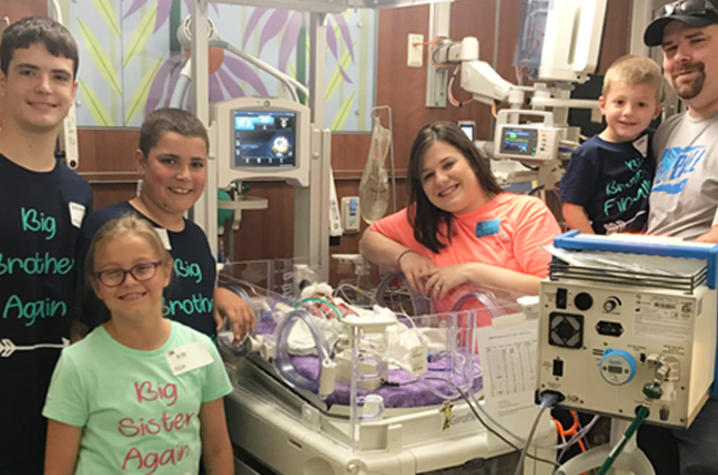 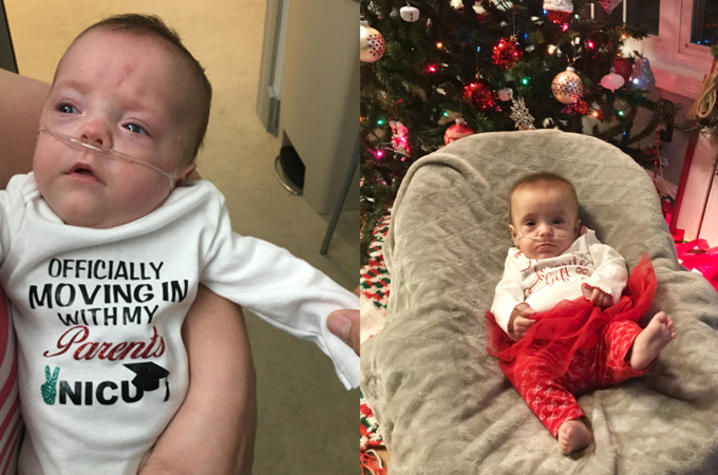 LEXINGTON, Ky. (Dec. 19, 2018) ­– Kyndall Covington is a legend at Kentucky Children's Hospital. Everyone who talks about her notes her strength and resilience, and rarely do they mention her name without adding "fighter" or "miracle."

What makes Kyndall so legendary? Born at just 360 grams, or just shy of one pound, she is the smallest surviving baby born at the University of Kentucky's Albert B. Chandler Hospital.

Kyndall was born April 5, 2018, to Tabitha and Bobby Covington of Franklin County. Already parents to four children, they had no reason to expect this pregnancy would be any different. But after a series of early tests and ultrasounds, Tabitha was referred to doctors who specialize in high risk pregnancies.

"Kyndall was measuring really small, something like the fifth percentile for growth," said Tabitha. Tabitha was also at risk for preeclampsia, a pregnancy condition characterized by high blood pressure that can lead to serious complications for mother and baby.

About a week before a regularly scheduled ultrasound, Tabitha noticed increased swelling in her legs and rising blood pressure. She went to her doctor, where an ultrasound revealed an absence of blood flow to the placenta and a reversal of blood flow from Kyndall back to Tabitha.

Tabitha and Bobby rushed to UK. At only 24 weeks into the pregnancy, Kyndall was born, weighing 360 grams, or about 12.6 ounces.

"Babies who are born at that gestational age and that are severely growth-restricted like that, the chance of survival is small," said Dr. Mina Hanna, medical director of UK's Neonatal Intensive Care Unit (NICU). "When you have babies that small, you don't know if they're going to make it. The most critical time is the first few days."

Kyndall was so small that much of the medical equipment needed was too big. So her care team had to improvise.

"We had to think outside the box for a lot of the things for her," said Dr. Aparna Patra, who admitted Kyndall — and later discharged her from — the NICU. The airway tube was too big for her very narrow airway. The umbilical venous catheter that provided Kyndall with much needed electrolytes did so at too high a volume for her small body. But Dr. Patra and her team adapted materials and life-saving medical equipment to her needs until Kyndall got bigger.

"Extremely premature and growth-restricted babies' bodies can only endure so much," said Patra. "But Kyndall did exceptionally well. She's an extraordinary baby."

Another challenge Kyndall faced was retinopathy of prematurity, an eye condition that occurs when babies are exposed to oxygen in early life. In the low-oxygen environment of the womb, the blood vessels grow from the center of the developing retina starting at the 16th week of gestation. When a baby is prematurely removed from the womb, the blood vessel growth is disrupted and the retina can detach from the rest of the eye, leading to permanent blindness.

"She was not supposed to be born; she was supposed to be a fetus inside her mother," said Patra. "But when you're exposed to the outside world, and placed on a ventilator with oxygen, that creates a chaotic disordered growth of your retinal blood vessels. That was inevitable, but the nurses did a great job of turning down the oxygen whenever they could."

Kyndall received two laser treatments during her tenure in the NICU. She has some scarring from the procedure that will likely cause her to have little to no peripheral vision, but it was agreed that was preferable to the alternative, which was no vision at all.

"If you watch her now, she doesn’t track at a full 180 degrees, but she does track," said Patra.

Kyndall spent five months and two weeks in the NICU.

"It was really hard," said Tabitha. For her and Bobby, it's a 45 minute drive to UK from their home in Franklin County. "If this had been our first baby, we wouldn't have known any different. But we both had healthy children."

And it was balancing spending time with Kyndall in Lexington with their other children that Tabitha and Bobby found the most challenging.

"We were celebrating my son's fifth birthday, and on the day of his birthday party, Kyndall was having a really bad day, and we were stuck at home. It was a constant feeling of being torn, because one child is here, and the other is there."

Tabitha and Bobby credit the nursing staff in the NICU with Kyndall's extraordinary progress and development. Dr. Hanna and Dr. Patra agree.

"It takes a village, it's really a team effort," said Dr. Hanna. "That includes nurses, respiratory therapists, lactation specialists, pharmacists, physical therapists. I can't stress enough how important the team is to having good outcomes like that. It’s extremely gratifying for us to see babies like that discharged healthy to their parents. That's why we keep doing what we're doing every day."

"Every baby is different, said Dr. Patra. "She did great, but another baby born at the same weight or gestation may not do as well and may succumb to the complications of prematurity. We don't want to give parents unrealistic expectations, but at the same time, I think there is hope. We have achieved so many advances in neonatal medicine, we can give them hope."

"You come into contact with so many families in here, and yes, we do have the smallest baby, but so many others had it so much worse," said Bobby.

The physicians agree that much of Kyndall's success comes from the dedication of Tabitha and Bobby who were at her bedside constantly and heavily involved with her care.

"She had the right start in her mother's womb and we tried our best to give her a favorable beginning," said Dr. Patra. "Her mother is very strong and had good nutrition, and was able to give Kyndall the right nutrition. Despite being born early and being growth-restricted, she was able to endure all of the treatments."

On Sept. 20, 2018, after 169 days in the NICU, Kyndall was discharged. She is listed on The Tiniest Babies Registry, an international database maintained by the University of Iowa of all the surviving babies with birth weights under 400 grams. Kyndall is now gaining weight and growing like a weed. At her last appointment, she weighed 11 pounds, six ounces. She's still on oxygen, but not for much longer. And aside from the retinopathy, for which she has regular visits to the ophthalmologist, she has no issues. Except for what to wear.

"She's growing too fast," said Tabitha. "Santa's going to bring her some clothes."

At home with her big brothers and sister, Kyndall is getting ready to celebrate another milestone - her first Christmas. And for her parents, it's going to be an unforgettable one.

"We have so much more to celebrate and be thankful for this year."