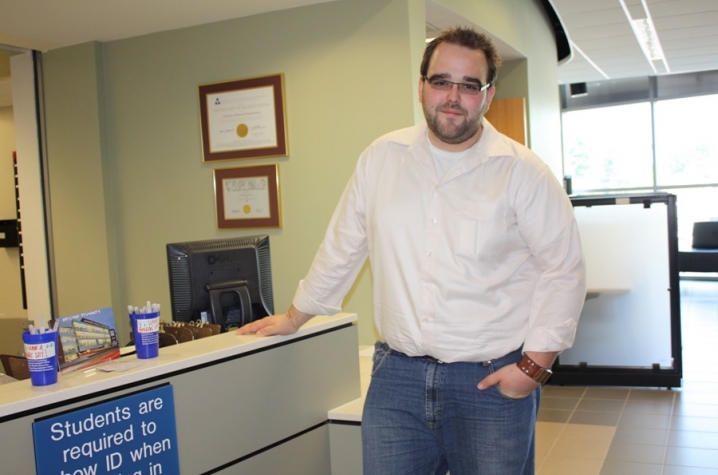 As UK prepares to become a tobacco-free campus in November, members of the UK community who have quit smoking will be sharing their stories to encourage and inspire. Guy Hamilton Smith, a second-year law student at UK, shares about his journey in becoming tobacco-free in hopes it will help others who are trying to quit smoking.

After smoking for ten years Guy Hamilton Smith decided to quit when a combination of health reasons and the financial burden of smoking seemed to get in the way of living his life. "I decided to do something about all my coughing and hacking, but I knew it would be difficult," Smith said. "I also knew the main campus would be going tobacco-free soon and thought this was the perfect time to quit."

Smoking became a part of his identity, Smith said, which was one of the reasons it became so hard to quit. "It really has kind of shocked me [that I am now a non-smoker]. It seemed so unfathomable. It really feels like you are giving up a part of yourself or like I'm leaving a friend behind," said Smith.

Smoking is a social activity and Smith worried he might lose friends when he quit, or that it would be hard to hang out with friends while they were smoking. However, he has still been able to hang out with them and removes himself from situations when it gets too difficult.

When he decided to quit the first thing he did was tell his family and friends. "I knew I would be more likely to succeed if I told other people that I was doing it," Smith said.

Unfortunately, Smith decided on the "cold turkey" method and did not make it through his first day after being handed a big research paper at his internship.

Smith felt cranky, tense, shaky, and said it was hard to concentrate. The hardest part was that he knew exactly what would fix it all. In moments like this, "a moment can seem like an eternity," Smith said.

At Brown's office Smith took a quiz and discovered his addiction level was a nine out of ten. Some of the characteristics of his high addiction level included smoking one to two packs a day, longing for one in the morning and smoking menthol cigarettes.

"Any place I went I had to take cigarettes. If I was going somewhere and I didn’t have cigarettes I would stop and buy them," Smith said.

With Brown's help he has been tobacco-free for over one month. "It is not easy but it is getting easier," Smith said.

A trick Smith uses is using chewing sticks. "I feel like I made it through the worst of it, which are the first few days," Smith said. "But I'm not through the forest. It will be months until then."

Smith's advice to others who are trying to quit smoking, or who would like to quit, include: to take it moment by moment - you can do anything for five minutes, know the cravings pass and they do not last forever, and to grit your teeth and get through it.

He has already seen benefits from not smoking, saving $200 in the last month. His lungs are feeling better and he has started jogging. "I can go a mile and it's not my lungs that hurt the most, it's my legs," Smith said.