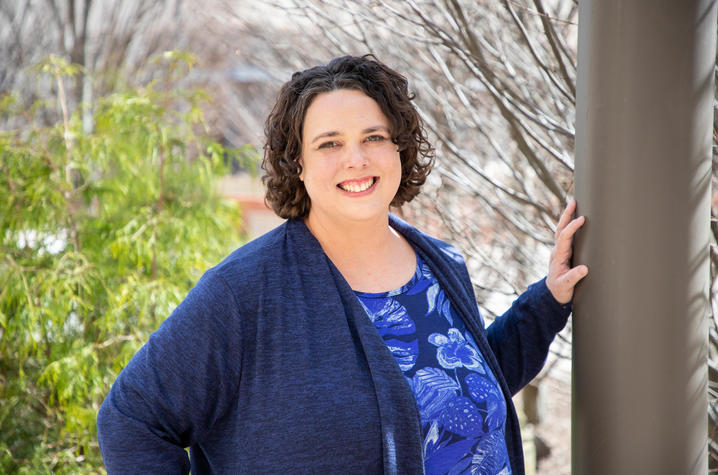 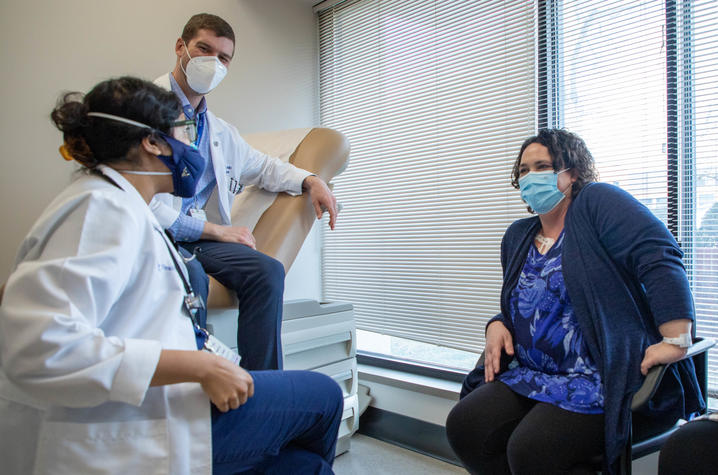 A mom of three kids, it is not surprising that sometimes the stresses of life can feel overwhelming.

And that is exactly what doctors kept telling Musick was the culprit of her digestive issues.

For four years, the Pikeville resident, experienced abdominal cramping, on-again, off-again blood in her stool and occasional weight loss. She says her doctors generally brushed off her symptoms as stress and ordered several blood tests and x-rays to rule things out.

But nobody ever suggested a colonoscopy.

“I continued to experience these symptoms,” Musick said. “Sometimes, my liver numbers were slightly high, and I would ask the nurses why. They would say, ‘Oh, don’t worry about that. It’s not that high, it’s fine.’”

A few years later, Musick’s 15-year marriage ended, and she was laid off from her job. Her digestive issues started getting worse. She figured her doctors would chalk it up to stress again. And why wouldn’t they? She was a 37 year-old newly single mom of three. She was young with no known family history of colon cancer. There didn’t seem to be enough reason to consider or expect the worst.

When her symptoms persisted, Musick sought out a new doctor, who felt her symptoms necessitated a closer look with a colonoscopy.

Unless symptoms warrant earlier testing, it is generally recommended to start routine colonoscopy screenings at age 45 to check for colon or colorectal cancer. During the procedure, a physician will inspect the entire large intestine (colon) using a long, flexible, lighted viewing scope (colonoscope), which is usually linked to a video monitor.

Four days before Musick’s scheduled exam, things took a turn for the worst. She woke up with severe abdominal pain and was barely able to stand. She ended up in her local emergency room.

“I felt silly, really,” said Musick. “I told them I was probably just constipated or something.”

The emergency medicine team ran the gamut of scans and came back with bad news.

Musick continued to decline. She was so sick that doctors told her she aspirated during her colonoscopy procedure and nearly died. She was transferred to the intensive care unit (ICU), where doctors were not sure if she would make it through the night. The next five weeks were a blur as Musick recovered in the ICU and finally learned what was causing her to be so ill.

The colonoscopy and resulting biopsies revealed a heavy burden of cancer. In addition to a Stage IV colon cancer diagnosis, doctors found 13 tumors on Musick’s liver.

“Here I am, diagnosed with Stage IV metastatic colon cancer at 37 years old with three kids, just divorced and laid off from my job a couple of weeks before,” said Musick. “Anything bad that could happen in those six months did.”

Doctors painted a very bleak picture of Musick’s future, telling her the only way to treat her disease was with chemotherapy. Musick found that talking with others about her diagnosis was a challenge, as the topic of colon cancer seemed too taboo. Knowing very little about the disease, she felt lonely and scared.

The first year after her diagnosis was physically crippling for Musick and mentally challenging for her and her young children. Musick was in and out of the hospital while she underwent chemo, and her kids were terrified of losing their mom.

“When I was first diagnosed in July of 2018, I did not have any information about colon cancer,” she said. “My doctors always told me I was not operable and never would be, that there was never going to be a chance for any other kind of intervention other than chemo. I really had no reason to question them.”

With seemingly no other place to turn, Musick took to the Internet to read as much as she could about colon cancer.

COLONTOWN is an online community for colorectal patients, survivors and care partners. As in any conventional town, the community is separated into neighborhoods, focused on patients with different stages of disease, types of treatment and special interests – like clinical trials, young-onset CRC patients and local support groups.

“It’s a place where hope meets science, as they say, and it is a wildly supportive community,” said Musick. “It is a treasure trove of information and a place where you can meet people just like you.”

For many reasons, Musick said, the online forum changed her life. Having been diagnosed with liver metastases, known as “liver mets,” Musick was connected with a “neighborhood” for people with liver mets to learn about different types of treatments. She took in as much information as she could in the year after her diagnosis.

She eventually worked up the nerve to seek a second opinion, landing her in the hands of Reema Patel, M.D., a medical oncologist at the University of Kentucky Markey Cancer Center.

Musick remembers her first appointment with Patel fondly. She recalls how impressed Patel was with the breadth of knowledge Musick had about her disease.

“Dr. Patel told me, ‘Now I can be somebody that can help advocate for you getting the kinds of treatments that will work best for you’,” Musick said. “I was just like, oh my gosh. Finally – someone who didn’t say ‘no.’”

Patel will never forget her first appointment with Musick. As is the case in most academic medical centers, Patel sent her senior fellow in to meet with Musick first, and says they came back saying Musick could present her own case almost as well, if not better, than they could.

“Lindsey comes so well-informed that, as a provider, I have to make sure I’m stepping up my game and come armed with the best information,” said Patel. “She is such a light in our clinic, and she takes bad news in beautiful stride – and I’ve given her a lot of bad news.”

Ultimately, the team decided to start with a liver resection – a surgical procedure in which a portion of the liver is removed. The most common reason for a liver resection is to remove a colorectal metastasis, which was the case with Musick. Success of the resection varies based on the size of the tumor as well as the location. In Musick’s case, resection required a right hepatectomy (removal of the right side of the liver), which makes up about 60% of the actual liver.

Cavnar performed Musick’s resection with success, and several months later Dr. Bhakta’s team removed the primary tumor with a lower anterior resection. Despite these successes, the team warned her of the high likelihood the tumor(s) could come back.

About one year after the liver resection, several new liver metastases were detected. Since that time Musick has undergone multiple treatments to these areas including ablation (a procedure in which a radiologist burns the tumors with a needle), radiation treatments with Dr. Mark Bernard from UK radiation oncology, and chemo on and off... More recently, Musick’s multidisciplinary team has been looking for alternative options, including new kinds of chemotherapy or even liver transplantation. Although most patients with colorectal cancer liver metastases are not candidates for this radical treatment, certain patients who have only ever had liver metastases that remain controlled for a long period of time can be candidates at certain specialized centers.

“Her story should empower other patients to seek second opinions if your doctor can’t answer all of your questions,” said Patel. “If Lindsey hadn’t advocated for herself, she wouldn’t have made it this far.”

Musick glows when she talks about her Markey team.

“They didn’t laugh at me. They didn’t tell me there were no other options. It was incredible,” she said. “They understood me and what worked for me, having to travel to see them, having three kids and being young. They didn’t just look at my chart, they looked at me – and that made all the difference.”

Nowadays, Musick has one of the coolest job titles around – “Mayor of COLONTOWN.”

And she fits the role perfectly. She’s charismatic, down-to-earth and open to talking to anyone who will ask about her life, living with colon cancer and advocacy. Not only does it give her a way to provide for her family in her role as mayor, but it also gave her life back. And it restored hope for her kids, who have been able to meet other patients like their mom with advanced-stage disease.

“When my kids see these other patients like me with advanced-stage disease who have been tumor-free for a long time and they look healthy and they are active, it gives them so much hope,” said Musick. “They see that it’s possible for me to thrive with this stage of cancer.”

Sitting in the clinic waiting room at Markey, other patients recognize Musick – not from her time spent in treatment – but from her advocacy work through COLONTOWN. She’s always tickled when they ask to talk with her.

She hopes to continue the group’s mission, to give others the tools to advocate for their health, too.

“Had I not found this group, I would never have known that there were other options out there,” she said. “I am stronger now on this side of things than I was even before cancer. It’s because of the support I get through this community and from my medical team, who have always worked hard to make sure that I have the things I need to thrive and take care of my family.”