LEXINGTON, Ky. (Dec. 21, 2016) — It wasn't until he could no longer open his mouth to take a bite of a cheeseburger that Winchester resident Barry Warner knew something was seriously wrong.

In fall 2009, Warner had just returned from a golf trip where he'd begun experiencing some mildly annoying symptoms: a little discomfort while eating; a reduced appetite. But he pushed on, assuming the issue would clear up on its own.

"I have a high threshold for pain," Warner said. "I don't always go to the doctor for everything. I usually let it run its course."

But once the pain escalated — leading to the aforementioned jaw mobility issue -- Warner sought the opinion of a friend with expertise in the area: the oral surgeon who had removed his wisdom teeth some 20 years prior. He assumed the diagnosis would involve a rogue tooth, or a temporomandibular joint (TMJ) disorder.

"I thought maybe I was one of those weird people who had an extra wisdom tooth come through later in life," he said.

The diagnosis, however, was much more serious. Seeing a mass in Warner's throat, the surgeon took a biopsy and confirmed the bad news: Warner had advanced throat cancer, Stage IVa.

"When somebody tells you that you have cancer, your world stops then and there," he said. "But one of my first thoughts was, 'Thank goodness it was me and not one of my daughters.'"

The news was especially shocking considering Warner didn't fit the profile for someone at risk for a head and neck cancer. Roughly 75 percent of these cancers are caused by smoking or excessive alcohol use, but Warner used neither. Nor did he test positive for the human papillomavirus (HPV), a risk factor that has been increasing the incidence of these cancers, particularly in non-smokers, in recent years. It was, as some might say, just simple bad luck. Despite that, Warner says he focused on what he could do to survive the cancer.

"I tend to be a positive person," he said. "My pity party didn't last too long."

He began collecting information on his treatment options. Warner first sought help at the University of Kentucky Markey Cancer Center, where he met with medical oncologist Dr. Susanne Arnold. Though he says he got "good vibes" from their consultation, Warner was thorough in his research, opting to get a second opinion at another facility before making a decision.

"The most important piece of information I got was from my friend John [the oral surgeon]," Warner said. "He said, 'Over the next few weeks and months, you'll be bombarded with information, but remember that just because a doctor says they can, doesn't mean they ought to. You're the one who has to live with that decision.'"

With those words in mind, surgery was quickly eliminated as an option – because of the location of his cancer, Warner was told only two medical centers in the country would even attempt to surgically remove it, and it would be a radical procedure with no guarantee of a good outcome.

After his second opinion, he knew he would go with a combination of chemotherapy and radiation, choosing to stay closer to home so he would have the support of friends and family to help him throughout the ordeal. He ultimately chose Markey based on his initial meeting with Arnold.

"The second facility told me I had a 40 percent chance of survival — maybe 50 percent just because I was otherwise healthy," he said. "That wasn’t what I wanted to hear, but I tried to look at it like the glass was half-full... But Dr. Arnold, she said she thought she could help me. And I believed her."

On Nov. 17, 2009, Warner began treatment at Markey, consisting of 35 radiation sessions and three chemotherapy infusions over the next two months. Though his cancer was advanced, it was still in a "curable" staging as it had not yet metastasized very far, according to Arnold. Because of this, his treatment plan was bold in an attempt to eliminate the cancer entirely.

"He had aggressive cancer treatment," Arnold said. "The combination of chemotherapy and radiation is some of the toughest treatment to undergo, but he was very strong and did exactly what we asked of him."

Markey radiation oncologist Dr. Mahesh Kudrimoti, who led the radiation treatments, echoes the importance of Warner's willingness to follow his plan to the T.

"He diligently followed all the instructions," Kudrimoti said. "He had a very positive attitude, was eager to learn about his treatments, and was a fighter."

At age 59 and seven years out from his treatment, Warner is a survivor with a few figurative battle scars. The biggest downsides to treating head and neck cancers are the nearly unavoidable side effects the chemo/radiation causes – namely, significant alterations to taste, smell and hearing. Though Warner's sense of smell is intact, he has some hearing loss, and is no longer able to taste foods except that which is extremely spicy, sweet or salty.

However – like any person who would view a 50 percent potential survival rate as "the glass is half full" – Warner says it's a trade-off he happily lived with when faced with the alternative of, say, not being around to walk either of  his daughters down the aisle.

"The side effects I deal with are collateral damage," he said. "I'm all right with that. It's just part of it. In the grand scheme of things, it's pretty insignificant."

"He has an amazingly philosophy of life," Arnold said. "His experience is pretty common, with chronic side effects that affect your everyday life, but his response to those limitations is remarkable."

Though he may have lost his sense of taste, life is now sweeter for Warner, who says that getting sick was one of the most humbling experiences of his life. He calls his experience with cancer his "second chance" to do things right, forcing him to step back and re-evaluate his priorities.

"Getting diagnosed with cancer was probably one of the best things that happened to me, and I am not the same person I was before," he said. "So I made myself a promise that if I survived, I would do my best to give back and help make a difference."

One of the ways Warner is giving back is through sharing his story with others, whether it's speaking with other patients about how he dealt with cancer, serving on Markey's Patient Advisory Group to improve care at UK, or lending his opinion on the best food and drink for patients with similar side effects. Recently, Warner brought his personal experiences to the attention of the International Society of Neurogastronomy (ISN), a group that studies the science behind how our brains perceive the taste of food.

At this year's annual ISN symposium, Warner participated as a judge alongside Markey patient Erica Radhakrishnan in the ISN's annual cook-off Challenge. This friendly competition pits two professional chefs and their respective scientific teams against each other in an attempt to make a dish that best appeals to patients who have experienced significant changes to their ability to taste and smell due to disease and treatment.

"I really didn't know what to expect – it was like you were live for a cooking reality show!" he said. "And it was nice to see the doctors in a setting like this – you got to see a different side to them. It does my heart good to know there's so much concern and momentum around helping patients like us." 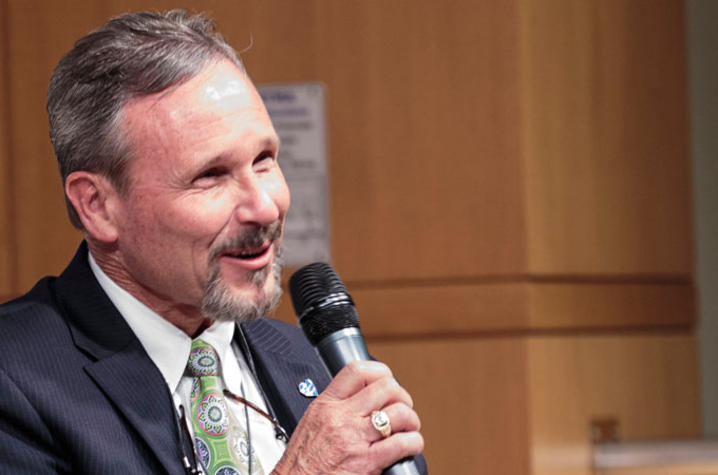 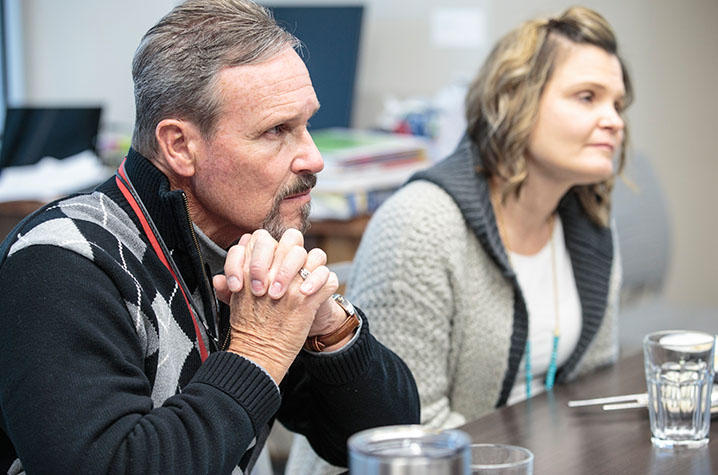 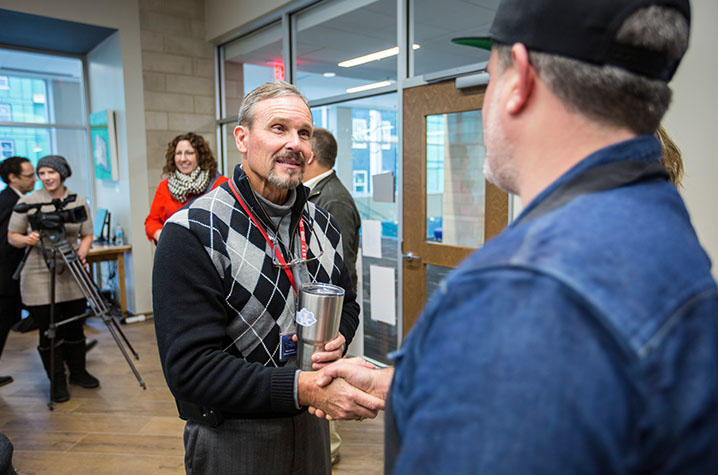 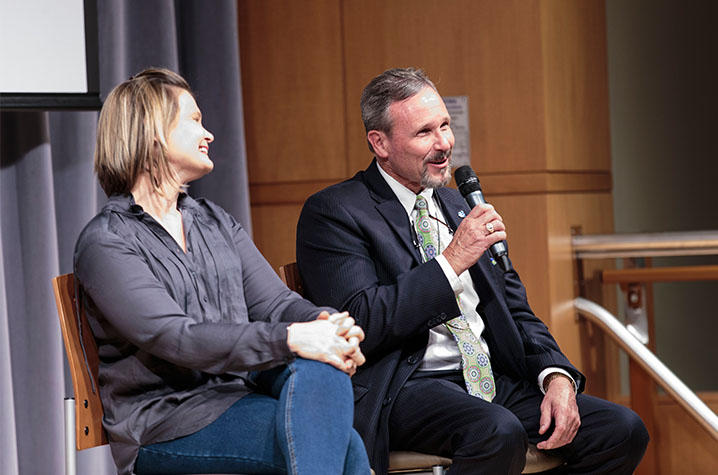 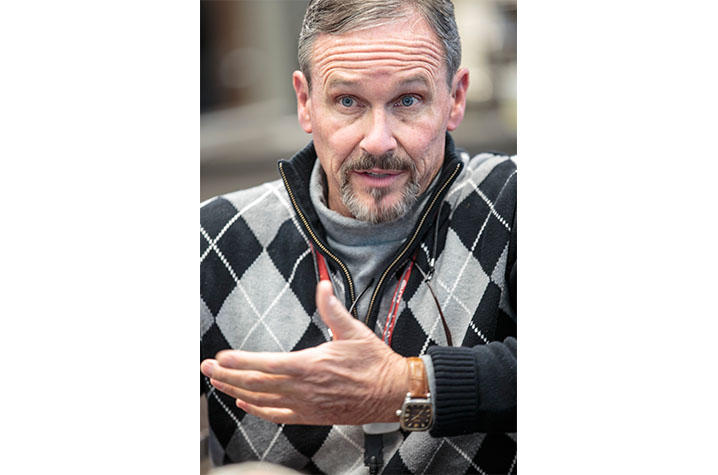 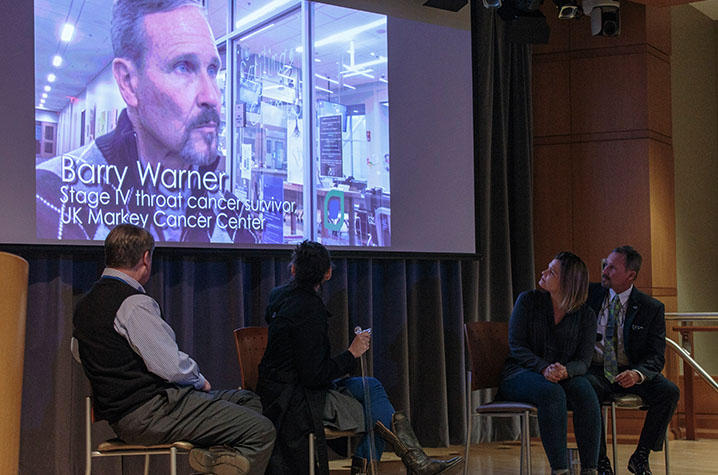