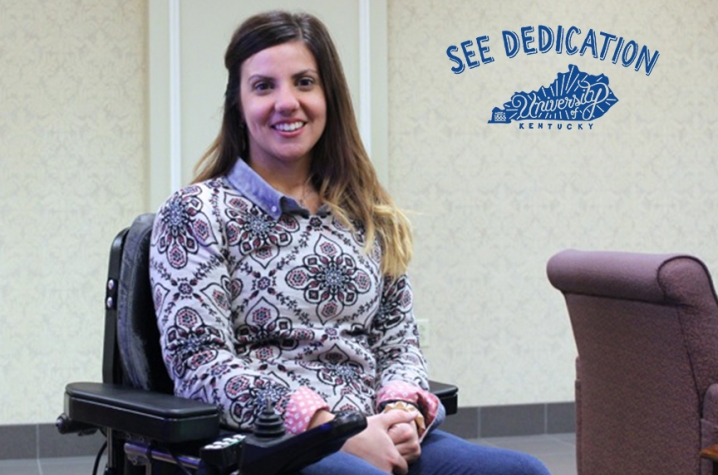 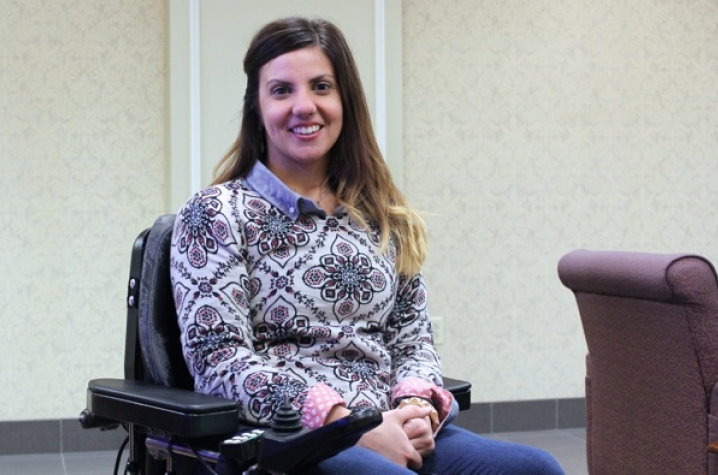 LEXINGTON, Ky. (Jan. 6, 2015) — Pockets on the backside of pants are useless for people who sit in a wheelchair all day. And low-waist jeans can be uncomfortably tight and, even worse, an embarrassment when exposing skin.

For spinal cord injury patient Heidi McKenzie, finding a fashionable yet functional pair of jeans to wear was just one more challenge related to living with a disability.

A lifelong fashion enthusiast, McKenzie thinks men and women in wheelchairs deserve a chic pair of jeans to accommodate their needs. She's in the process of launching a business called Alter UR Ego, a fashion-forward clothing line specially designed for people in wheelchairs.

No stranger to the spotlight, the former Ms. Wheelchair America contestant is already a natural spokesperson for her products. She got the idea for her business while meeting other women competing in the 2012 Ms. Wheelchair America pageant, who also expressed an interest in hip and youthful clothing for people with disabilities.

"Most disability clothing is targeted toward the elderly — so flower pots and cats," McKenzie said. "I want an everyday pair of jeans for someone. Because that is your go-to article of clothing."

Founding her own start-up company is only the latest of many endeavors for the paraplegic patient at the University of Kentucky Department of Physical Medicine and Rehabilitation at Cardinal Hill Hospital. Now living in Mount Sterling, Kentucky, McKenzie graduated from Morehead State University in 2011 and competed in the Miss Wheelchair America pageant the following year. She drives her own wheelchair-adapted van, works at her father's company in Morehead and currently lives independently in her apartment. She's tried out a number of adapted sports, including horseback riding, tennis, scuba diving and kayaking.

With every opportunity life brings, McKenzie consults with Dr. Sara Salles, professor in the UK Department of Physical Medicine and Rehabilitation, to ensure her health and physical condition permits an active lifestyle. After sustaining a complete spinal cord injury in a car accident in 2007, McKenzie moved back to Kentucky to live with her father, and began rehabilitation with Salles at Cardinal Hill Rehabilitation Hospital. She received inpatient care at the hospital for two weeks. In addition to her spinal cord injury, McKenzie needed cognitive therapy from a brain injury caused by the accident. McKenzie worked with Salles to set realistic, attainable goals, which included living a completely independent lifestyle.

Seven years later, McKenzie maintains her health and lifestyle through "tune-up" appointments with Salles every few months. Salles monitors her patients with a holistic approach, addressing any health issues related to the injury, discomfort caused by her wheelchair, or other physical or psychological problems. Salles said normal tasks able-bodied people take for granted, like putting on shoes and using the bathroom, are challenges for her patients.

"Daily life is challenging for folks with spinal cord injuries," Salles said. "The beauty of our patients is they do it with grace. The struggle is there, but most of them will not tell you or share that struggle with you on a regular basis."

Because spinal cord injury patients require long-term care, Salles frequently develops personal relationships with her patients and their families. Salles introduced McKenzie to many extracurricular and leadership opportunities available to people with disabilities, including an adaptive sports camp in Colorado. A model patient, McKenzie has played an active role in regaining her independence and keeping a positive attitude about her condition. Salles said McKenzie will communicate when something's wrong and proactively follow her advice to stay healthy.

In addition, McKenzie serves as a volunteer counselor and mentor to Salles' patients who have recently sustained a spinal cord injury. Warm, endearing and optimistic, McKenzie has a special ability to shed positive light on hard situations. She emphasizes to Salles' patients that life post-injury can be exciting and rewarding.

"I think everyone who comes to know Heidi loves Heidi," Salles said. "Just because she is who she is. She lights up a room. You know when Heidi is around because usually she is doing her (Miss America) wave."

McKenzie relates her relationship with her doctor to a "long-distance marriage." While she lives in Eastern Kentucky, she contacts her doctor often. McKenzie appreciates Salles for being frank but compassionate when discussing the pursuit of goals. Salles gives her patients the freedom to make decisions about their lifestyles, but counters that freedom with advice to stay healthy and not further complicate their conditions.

"She has always been so supportive in living an active lifestyle at your convenience," McKenzie said. "Because everybody takes a while to adapt to disability, and she doesn't rush that. So when you're ready to go out and adventure and experience new things, she is going to be encouraging."

For more information about Alter UR Ego, and to learn how to support McKenzie's start-up company, visit http://www.alterurego.co.