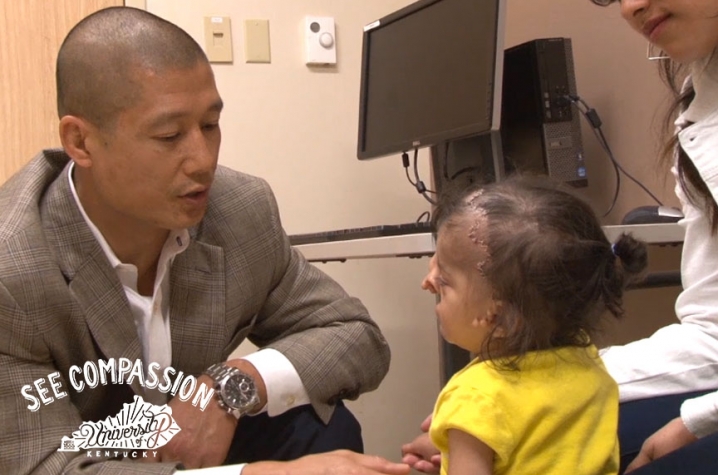 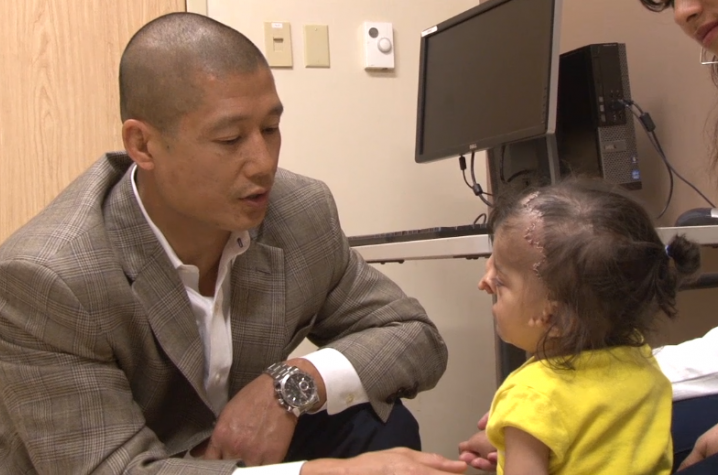 LEXINGTON, Ky. (Oct. 2, 2014) — After Cony Puac delivered her daughter Evany, birthing attendants placed the newborn in her arms and cleared the room.

Born in a remote Guatemalan village surrounded by snow-capped volcanoes, even in the first moments of life, children born with facial clefts are ostracized from society. Evany was diagnosed with a severe midline cleft palate by an orthodontist in her community. An opening at the center of her face spanned from her bottom lip to the space between her eyes. On either side of the opening, her eyes were separated by 38 centimeters — 20 centimeters wider than that of an average child's. Evany's nostrils were pushed to the left side of her face in cluster of tissue. At the crown of her head, Evany suffered from several holes in the cranium bone beneath the skin.

Evany also lacked an upper lip, which she needed to receive nourishment early in life through breastfeeding. In order to feed Evany, her parents obtained special bottles designed for children with severe cleft palates from a charity called Evelyn's Baskets of Love and Life. Adapting to her condition, Evany learned to feed herself without a palate by mashing solid foods with her fist and the inside of her mouth. As she continued to grow in her first year, the facial cleft impeded Evany's speech development. Only able to form sounds in the back of her throat, she replaced the word "Papa" with the sound of "a-a."

University of Kentucky pediatric reconstructive plastic surgeon Dr. James Liau said children born with craniofacial cleft palates in countries with limited medical resources are deprived of the chance to live a normal life. Facial clefts and cleft palates are widely misunderstood abnormalities that affect babies across countries and cultures, although environmental conditions and hereditary factors could contribute to the condition. At the University of Kentucky, Liau helps counsel families that have severe facial clefts while babies are still in the womb, and he intervenes as soon as possible after birth. In Guatemala, most rural populations don't have access to surgical experts who can correct these facial abnormalities in children.

"I feel very lucky to have the opportunity to do what I can do," Liau said. "In Guatemala, that's it. Your child dies, or you try to find someone overseas that can help you. It's sad, but it's an unfortunate fact of life."

Liau travels to Guatemala once a year with the Children of the Americas, a nonprofit dedicated to providing medical and surgical services to women and children in rural Guatemala. Liau packs a small surgical kit to perform cleft lip and palate surgeries during his volunteer trips in conjunction with other medical professionals. When he encountered Evany and her family during a trip in January 2014, he knew that correcting Evany's condition would require a major procedure that couldn't safely be performed in Guatemala.

"Her case was pretty severe and pretty dramatic," Liau said of Evany's facial cleft. "It's probably one of the most exotic facial clefts that you'll ever see."

Working with a national network of doctors and volunteers, Children of the Americas, arranged for Evany and her mother to travel to the UK Chandler Hospital for the first, and the most intensive, of three reconstructive surgeries. Evany's craniofacial surgery involved a team of UK HealthCare specialists representing the divisions of anesthesiology, pediatric neurosurgery and pediatric plastic surgery.

Cony Puac and 18-month-old Evany arrived in Kentucky on May 12 and visited the UK Chandler Hospital for a pre-surgery cat scan on May 23. While in the waiting room, the new walker clanged a tambourine and grinned while playing games, oblivious to the impending surgery. Puac, 19, quietly sat with translator Jennifer Christmann, who is also interim director of facilties planning and development at UK HealthCare and volunteers with Children of the Americas.

Puac traveled away from her husband and 3-year-old son in Guatemala to accompany Evany through the surgery. A volunteer family based in New Albany, Indiana, hosted the Guatemalan mother and daughter for several weeks before and after the surgery. While Puac's host family treated her to shoe shopping and Culver's cheeseburgers, she said she missed her home and family.

"She knows she is here for a purpose," Christmann said.

On May 30, Evany underwent a cranial vault reconstruction at the UK Chandler Hospital to bring the orbits of her eyes closer together. Liau worked with UK HealthCare pediatric neurosurgeon Dr. Thomas Pittman to correct Evany's cranial bone structure, laying the groundwork for future soft tissue surgeries. During the surgery, Liau and the plastic surgery team removed a part of her skull, and then united the facial bones at the location where they plan to reconstruct Evany's nose. Evany was held in the pediatric intensive care unit for a few days as part of post-operative protocol.

Walking with more confidence in an examination room two weeks after surgery, Evany recovered with her same playful and sweet spirit as before, which Liau said was a good sign. Her hair would eventually cover a scar left from a line of stitches marking the incision made at the crown of her head. With the adjustments to the orbits of her eyes, Evany was now seeing straight ahead. She inspected Liau as he held her in his lap, speaking in Spanish and calling her "sweet pea." Mom, Cony Puac, was overwhelmed with gratitude to Liau and the surgical team.

"It’s a big change, and I am very happy that she’s changed." Puac said of her daughter through a translator. "I am very happy (Liau) did such a good job. I am very appreciative and very thankful to him."

Liau said moving the cranial and facial bones into place was the hardest step in Evany's journey. The next two surgeries, which will be performed by Liau in Guatemala, will involve reconstructing the soft tissue features of Evany's face. Liau will use existing tissue to construct Evany's nose and upper lip during the second surgery in January. He will return the following year to perform a procedure that will rebuild the palate. Through the course of two years and three surgeries, Liau hopes to achieve the closest semblance to "normal" for Evany. He believes all children deserve a chance to live a normal life.

"A cleft palate should not keep you from having a healthy, normal, productive life," Liau said. "We are at a stage in cleft care when you should just continue on with what you're supposed to be doing, which is to be happy and have a family and have a life. The ability to do that either here in Kentucky or overseas is something I'm really happy to have."