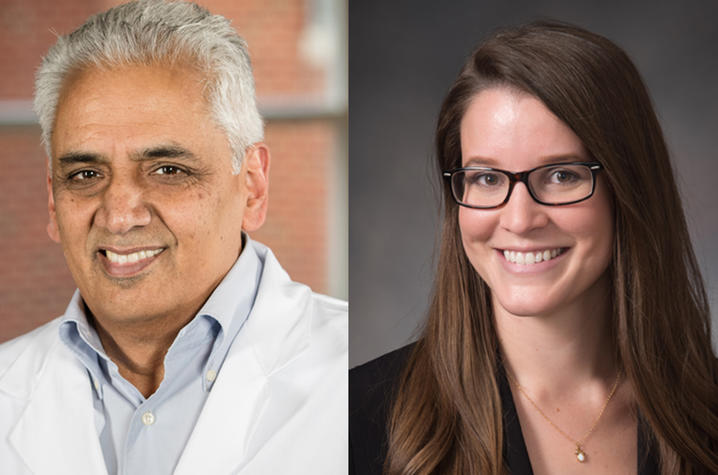 LEXINGTON, Ky. (May 22, 2020) — Multiple sclerosis (MS) is the most common demyelinating disorder in young adults but getting an accurate diagnosis can be tricky. The diagnosis is difficult as there is not one single test that can determine if someone has the disease.

Doctors use several strategies to determine if a patient meets the long-established criteria for an MS diagnosis. They also use tests to rule out other possible causes or mimics. These strategies include a thorough look at medical history, a neurologic exam, and other tests including MRI, and spinal fluid analysis. Dr. Jagannadha ‘Jay’ Avasarala, neurologist with the Kentucky Neuroscience Institute (KNI), recently published a study with others from the University of Kentucky’s Department of Neurology based on the fact that symptoms of MS can overlap with another disease known as neuromyelitis optica spectrum disorder (NMOSD). NMOSD is a rare neurological disease that affects the brain and spinal cord. It is characterized by inflammation of nerves within the central nervous system.

Testing for MOG (myelin oligodendrocyte glycoprotein) Ab, which causes MOGAD, became available in the United States in 2017. Screening for NMOSD is recommended but not mandatory to establish a diagnosis of MS. In his article, Dr. Avasarala says that if his study’s findings can be replicated on a larger scale, he believes the guidelines to diagnose MS should be changed. He wants it to be mandatory to rule out NMOSD before an MS diagnosis can be made. He says one big reason for this is an established fact that drugs used to treat MS can worsen NMOSD. Furthermore, even after a diagnosis of NMOSD is established, treatment remains a challenge since there are no FDA approved drugs for MOGAD as the following story illustrates.

Annette Gentry experienced what she calls a “bad crash” this past summer. The 61-year-old went to UK HealthCare’s Good Samaritan Emergency Department with what she describes as extreme muscle weakness and numbness along with what felt like an electric wave going down the right side of her face. “It felt like I was having a stroke. There was no warning. It was sudden, painful, and scary,” she remembers.

Doctors found no indication that she had suffered a stroke and decided to run some more tests. Those tests showed what she was experiencing was due to an autoimmune disease. Gentry had already been living with one autoimmune disease, myasthenia gravis (MG), for many years so news that she potentially had an additional rare autoimmune process was shocking. She says the word that best describes her life in the months that have followed that hospital visit is ‘fear’. “You are always waiting on the next thing. What else can there be?”

Madison Higgins, advanced practice provider at the Kentucky Neuroscience Institute, along with Dr. Avasarala, helped Gentry after her visit to the ED. While some of Gentry’s symptoms signaled the potential for MS, blood tests showed that she instead had the MS mimic, NMOSD. Those blood tests showing that she has three unique antibodies leading to both NMOSD and MG. She received her MG diagnosis many years ago but was unaware of the AQP4 antibody-positive NMOSD and MOGAD (MOG antibody-positive disease).

“NMOSD and myasthenia gravis are uncommon diseases on their own so to have both conditions with three different antibodies is extremely rare,” said Higgins. Dr. Avasarala says to his knowledge, Gentry is the first person in the world to have all three of these unique antibodies.

Gentry says her condition has been life-altering over the past few months. She describes having muscle tremors throughout the day and night, “It is easier to count the times I am not having the tremors than the times I am.”

She loves her job of 15 years as a food server at Henry Clay High School. She attempted to go back last August after her hospital stay in the summer, but says her condition progressed rapidly after that and has been on leave ever since. “I’m now unable to work. That’s not me. My hand would get so numb I couldn’t grip things…even things as small as utensils.” Gentry, who is dependent on her husband, says there is a high possibility she will never be able to return to that job but is holding out hope that treatment can bring some relief.

While it is unique, Gentry describes her situation as a dilemma, “How do you determine which one of these diseases is causing the problem? To have three different ones that don’t have a lot of research on treatments….we kind of fly by the seat of our pants. Is this thing going to be trial and error?”

Higgins says it isn’t surprising there isn’t a lot of research for Gentry’s particular situation because the conditions are so rare. “Having three different autoimmune processes does complicate the treatment plan. We have to weigh each disease and assess risk for each.”

Unfortunately, NMOSD is incurable but it can be treated to help prevent relapses and disease progression. With this new diagnosis, Dr. Avasarala and Higgins helped develop a treatment plan for Gentry which consisted of Soliris infusions twice a month along with the continuation of her treatment for MG. It is the first and only FDA approved treatment for AQP4 antibody-positive NMOSD. “This medication has been on the market for other conditions but was just approved for NMOSD in June 2019. This was welcome news for both patients and health care providers,” said Higgins.

Helping patients like Gentry, navigate living with an incurable disease or diseases can obviously be a daunting task, hoping they come up with the right treatment plan to manage the symptoms. Coming up with the right treatment plan starts with getting an accurate diagnosis. Which is the big reason why Dr. Avasarala conducted this study and is calling for a change in the guidelines for diagnosing MS.

“An accurate diagnosis is an absolute must. These neurological conditions, while not acutely fatal, can cause severe disability such as paralysis or blindness. Patients still have a long fulfilling life to live when they receive these diagnoses. It is essential to provide an accurate diagnosis and appropriate treatment so that patients can live the lives they planned to. We are fortunate to have the current medications that we do, and it is an extreme disservice to the patient if we don’t provide the accurate diagnosis to allow them maximum benefit from the appropriate treatment regimen,” said Higgins.