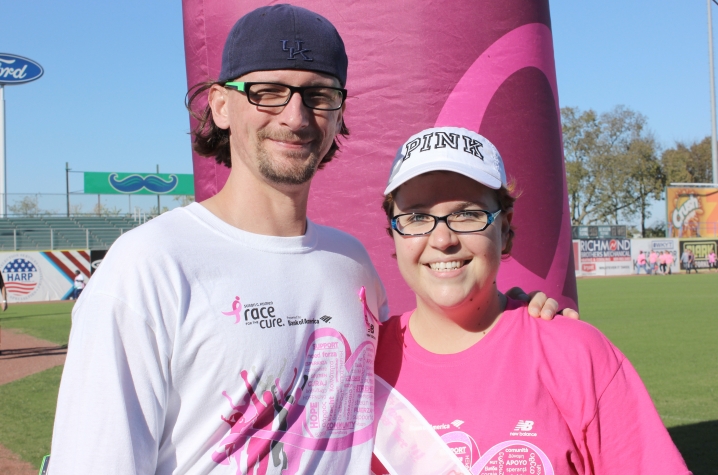 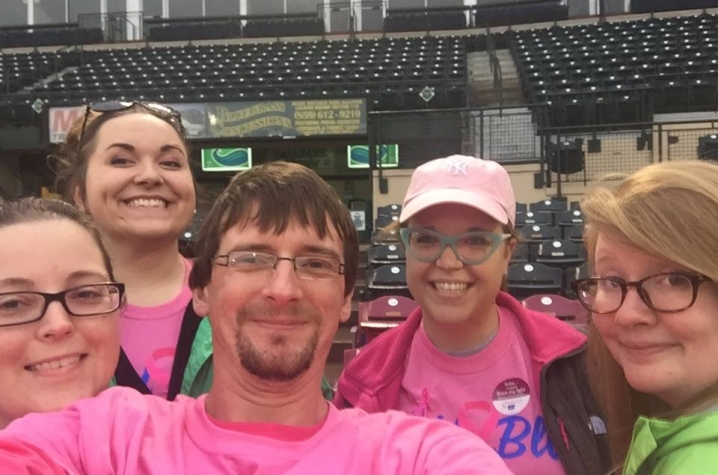 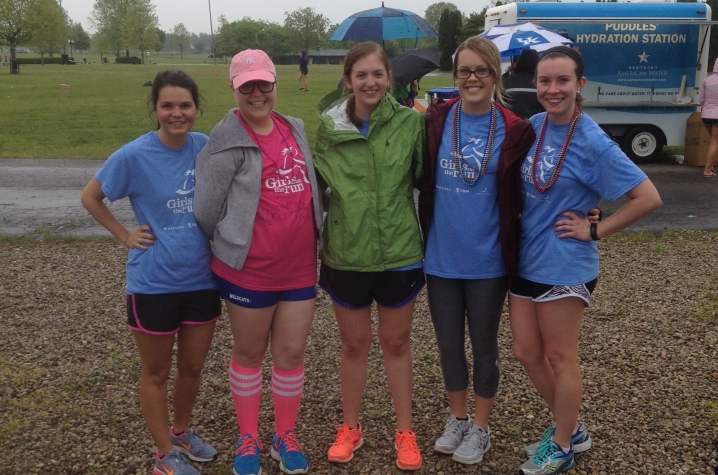 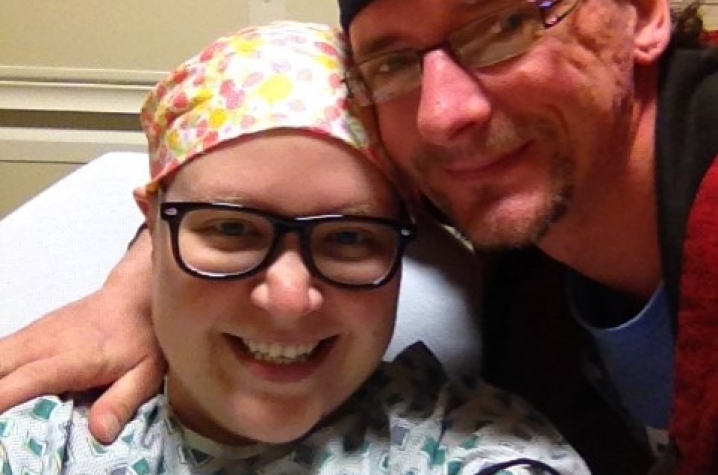 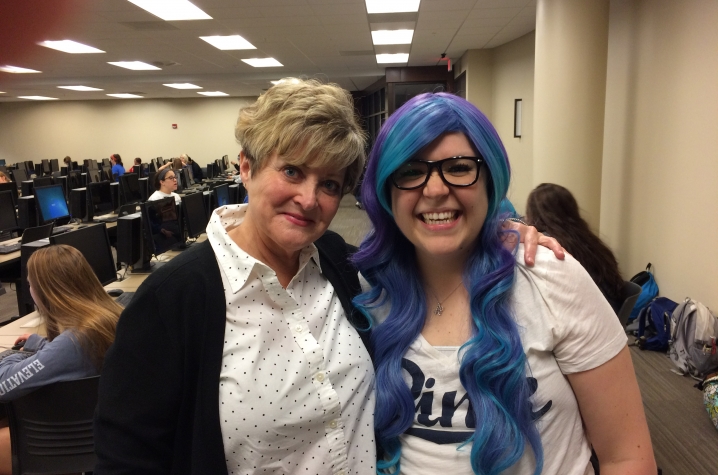 She wore a victory sash and clasped a pink carnation as she and husband Jason waited for friends at the ballpark. The race was a moment of exhalation for the University of Kentucky student who refused to let her illness hinder her progress toward becoming a nurse.

One year earlier, Smith walked across the same finish line at the Whitaker Bank Lexington Legends Stadium knowing her struggle with breast cancer was just beginning. At the time of her diagnosis, the 28-year-old from Middlesboro, Kentucky, was working clinical rotations at Kentucky Children’s Hospital, the UK Birthing Center and UK Polk-Dalton Clinic, as well as taking courses in the UK College of Nursing.

Breast cancer threatened to interrupt her progress toward graduation. After detecting an abnormal lump on the top of her right breast last October, Smith immediately suspected she was the next victim of breast cancer in her family. Oncologists at the UK Markey Cancer Center located a stage-2 tumor the size of a softball on the outer top of her right breast, which required aggressive and immediate chemotherapy followed by radiation and a bilateral mastectomy. When she got the call with the biopsy results, her suspicions were confirmed.

After her diagnosis, Smith tested positive for the BRCA-1 gene, learning her genetic predisposition put her at an 85 percent chance of developing the disease. Her treatment plan included rounds of aggressive chemotherapy treatment and double mastectomy surgery in the spring. She consulted with professors and the dean of the UK College of Nursing, who supported her decision to push through school and an intensive treatment plan at the same time.

“She was like, ‘Let’s do this,’” Smith said of Dean Janie Heath.

But beating cancer and finishing school wasn’t enough for Smith, who thrives on activity. She wanted to finish next year’s breast cancer awareness race as a runner and a survivor. Despite the physical hardship and exhaustion in the coming year, she decided to take up walking, and when she had the energy, running. She signed up for races and mentored young runners. She even joined an online runner’s group, connecting with fellow runners and cancer patients across the globe.

“Some people said I should take some time off nursing school,” Smith said. “For me, movement is medicine.”

No stranger to breast cancer, Smith learned toughness battling the disease from women in her family. Her maternal grandmother and seven aunts received a breast cancer diagnosis and her cousin tested positive for BRCA-1. Smith’s mother was first diagnosed with breast cancer at 26, and after beating the disease experienced a recurrence at 30. Growing up around breast cancer survivors sensitized Smith to the importance of regular screenings and mammograms. She said she learned how to fight cancer from her mother’s positive outlook.

“This is the exact same way she tackled it,” Smith said, referring to how her mother approached cancer. “That is one thing I have to say, I learned it from my mom. I took her positivity. When she had it, she never let anything get her down.”

Smith’s diagnosis came at a critical point in her nursing education. Rather than postponing her career goals, she continued clinical and classroom training through 12 weeks of dual chemotherapy, 12 more weeks of another chemotherapy, a double mastectomy and radiation therapy during the summer. Also, with goals to have a family, Smith went through oncofertility treatment, which induced menopause during chemotherapy to preserve her reproductive functioning. Refusing to use her disease as an excuse to stay home, Smith missed one clinical during the fall semester and was absent for two weeks for her mastectomy procedure. Her husband sometimes doubted whether she was well enough to go, but Smith always insisted.

“I could be in worse places,” she said. “I am surrounded by nurses, so if something goes bad, they know what to do.”

Smith’s professors and classmates rallied behind Smith in her effort to graduate in December 2016. Many of her professors organized meals and accommodated her treatment schedule to ensure she had the opportunity to succeed. Smith completed clinical rotations wearing a beanie to cover her head and hiding the port in her chest. Chemotherapy affected her energy level and sometimes interfered with her ability to focus for exams. Students and faculty donated items and brought her Mr. Goodbars after her mastectomy surgery.

Smith also mentored elementary age girls during her cancer treatment. As part of her required public health rotation, she volunteered for Girls on the Run at Lansdowne Elementary, boosting their confidence and self-esteem and encouraging them to stay physically active. Her students sent her a load of get-well cards after her mastectomy surgery.

“I still have glitter all over my house,” she said.

As a cancer survivor, Smith plans to enter pediatric oncology nursing when she graduates this December. After her year battling cancer, she feels she can relate to young oncology patients and bring positivity to situations that seem hopeless. She has also learned emotional toughness, which will help her stay strong when seeing others suffering or enduring harsh therapies. She will also encourage children to move and play through pain and sickness to boost their immune systems and morale.

“You have to laugh through it because it’s what helps you,” she said. “I want to encourage them to be active, even if it’s just getting up and walking around a playroom.”

In a gathering of her entire College of Nursing class, Smith announced her cancer-free status on Oct. 5. The news was met with a round of applause. Many students sent her messages saying they were inspired by her resilience and positivity, which persists after cancer.

“As much fun as I’ve had, it’s been horrible at times,” Smith said. “But it could have been worse — I got to have milkshakes every day.”