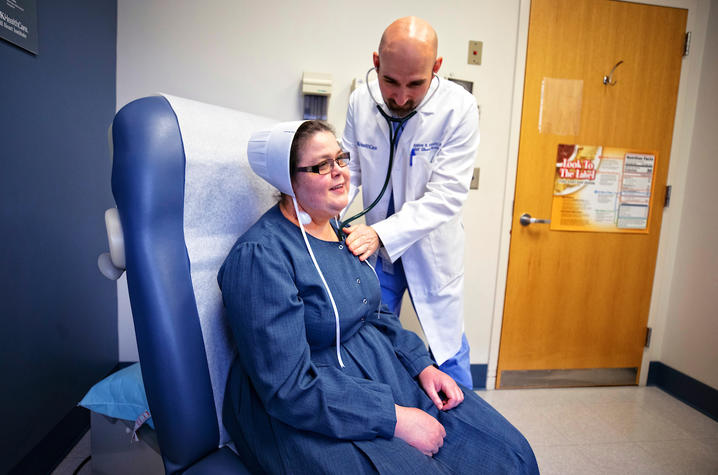 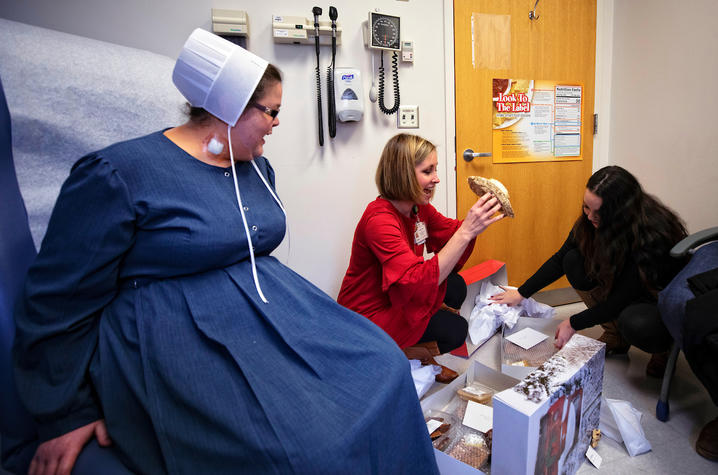 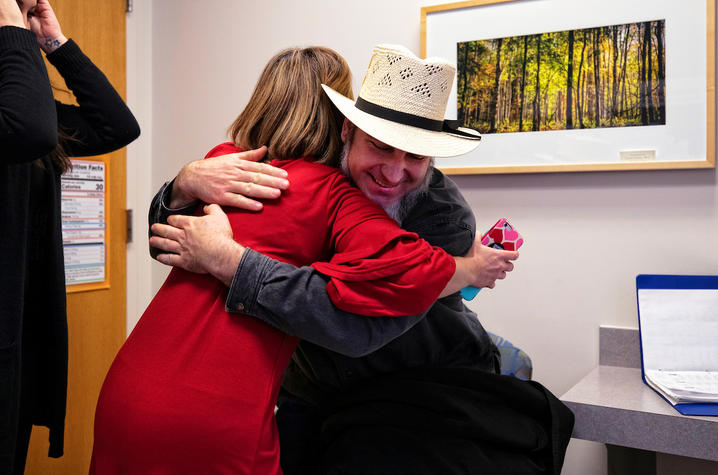 LEXINGTON, Ky. (Dec. 17, 2018) – The evening of June 21, while Emma Sue Mast was anxiously waiting to receive a new heart, she got a sign that immediately put her at ease: a rainbow, visible from her hospital room, that stayed alight for hours.

“Donate Life’s theme this year was ‘Be a rainbow in someone else’s cloud,’” Mast said. “I took that as a sign that everything was going to be all right.”

Prior to noticing her rainbow, Mast – who also turned 37 years old that day – had just received the best present she could have asked for — a phone call letting her know that she was about to get a second chance at life via a heart transplant.

The mother of two from Hawesville, Kentucky, had spent more than a decade battling serious heart problems. After her second son was born in 2006, she started noticing some significant changes in her health, including shortness of breath, heart palpitations and tachycardia (abnormally rapid heart rate), and swelling in her legs and feet. By the following April, the issues became too severe to ignore.

“I couldn’t wait to go to bed at night; I was just so tired,” she said. “I was a busy mom, but I couldn’t understand why I couldn’t keep up.”

A visit to her local family doctor in Stanford showed an abnormal rhythm and an enlarged heart. Her physician referred her to cardiac specialists in Louisville, who first tried medications to control her arrhythmia.

When that failed, Mast had an internal defibrillator (ICD) implanted in 2007. ICDs continuously monitor heart rhythm and provide a shock if needed – an event Mast said she experienced three separate times.

“It just knocked me to the ground,” she said.

Over the next decade, Mast would undergo an ICD replacement, an ICD repair, and more medication in an effort to save her failing heart. But as her heart continued to enlarge, she began experiencing longer episodes of tachycardia and frequent premature ventricular contractions (PVCs) – an extra heartbeat that begins in one of the lower chambers of the heart and causes the “fluttering” feeling of a skipped heartbeat in the chest.

Earlier this year, her cardiologist then referred her to UK HealthCare for a heart transplant. For Mast, simple everyday tasks – like housework and going out to shop – had become very difficult as her heart weakened.

“I had mixed feelings about getting a transplant,” Mast said. “My thoughts were that somebody has to die in order for me to get a new heart. But I was also looking forward to having the chance to have a better quality of life.”

Mast was evaluated by UK Gill Heart Institute cardiologist Dr. Andrew Kolodziej, who noted that while they first tried to optimize her medical therapy, her body was unable to tolerate the medication. Due to her worsening ventricular arrythmias and extreme weakness, she was listed for transplant shortly after her evaluation.

“When I first met Emma in the hospital, she was so fatigued that she was ready to have anything done to improve her quality of life,” Kolodziej said. “We decided to list her for heart transplant before her health became even worse.”

Though she initially remained in Hawesville while waiting for a new heart, she was admitted to UK HealthCare on June 8 after her erratic heart rhythm repeatedly landed her in the emergency department of her local hospital. With her 37th birthday approaching, Mast’s husband, Robert, jokingly suggested that maybe that would be the day she’d get her new heart.

He was close. On June 21 – Mast’s birthday – she got the call that a potential donor was available.

“I was happy and sad,” she said. “I was thinking about how it's going to be after – how I'm going to have a second chance at life. I was more focused on that than the actual surgery. But I was sad because I knew there was a family out there grieving.”

Early the next morning, Mast received her new heart. When she woke up from surgery, she says she first wasn’t convinced she’d actually received a new heart until she realized that the rhythm felt different.

“The heart was beating hard, fast and even,” she said. “It was a different beat."

Mast spent roughly two weeks in the cardiovascular intensive care unit and was discharged from the hospital on July 4, which she refers to as her own personal Independence Day. In the six months since her surgery, she says she’s felt a tremendous difference in her health – a feeling that came as a surprise, since she’s spent much of her young life running at far less than a hundred percent.

“I didn’t realize what I was living with before – I thought that was just the way life is,” she said. “Now I feel great; I can’t believe the difference. I’m able to take care of my family, clean the house, do laundry. I love to go shopping now that I have the energy for it!”

The timing of a transplant is key for patients to have the best outcomes, Kolodziej says. For patients like Mast who are experiencing end-stage heart failure, the medical team is working against the clock to find a heart before other vital body functions begin to fail.

“Timing is very important in these types of patients,” he said. “Part of the reason why she has done so well after transplant is because we were able to catch her before the rest of her organs became affected by her advancing heart failure. Because of our transplant coordinators and the rest of the team making this a smooth process, we were able to list her and find a heart for her quickly.”

In the past, Mast says she loved making plenty of special treats for the holidays, but in recent years had been too sick to do anything but rest. This year, she says she’s ready to make up for lost time – and the generous act of her donor is never far from her mind. She already knows what she’d like to say to her donor’s family – she’s already written her thank-you letter, which Kentucky Organ Donor Affiliates will anonymously pass along to the family.

“My way of thinking is that the donors are the heroes,” Mast said. “It made my family want to be donors, too, so we have signed up. It’s a very giving thing, and it’s definitely a gift of life.”

To join the registry, visit registerme.org or sign up when you renew your driver’s license.  The donor registry enables family members to know that you chose to save and enhance lives through donation. Kentucky’s “First Person Consent” laws mean that the wishes of an individual on the registry will be carried out as requested.