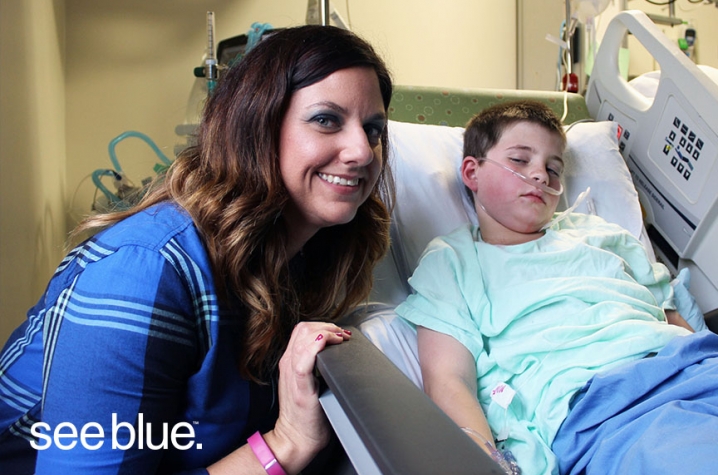 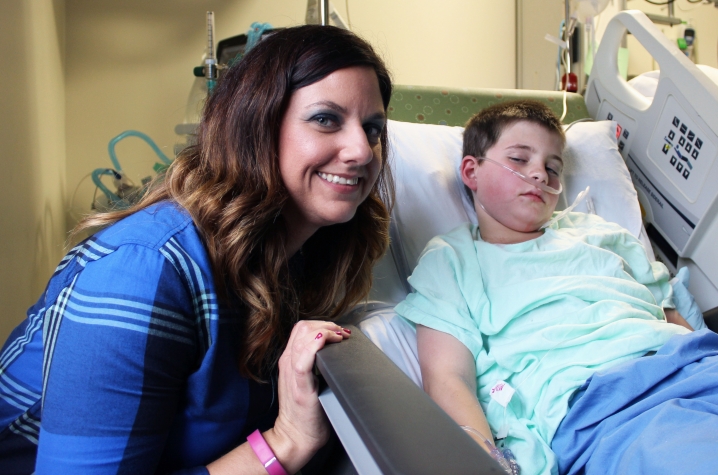 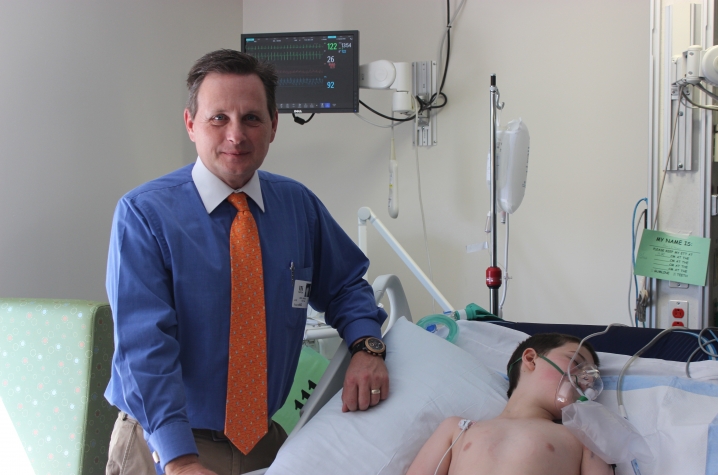 LEXINGTON, Ky. (Oct. 20, 2015) — The rosy flush of Ethan Abel’s cheeks comforted school nurse Cassandra Artrip as she watched the 10-year-old doze with a plush dog in his arms.

“He’s pink and breathing on his own, and I am tickled to see he’s doing so well,” Artrip said during her visit to the Pediatric Intensive Care Unit at Kentucky Children’s Hospital on Oct. 9.

Only a few days earlier, Artrip found Ethan unconscious and with a blue tone to his skin before she started administering CPR and rescue breathing on the playground of Robinson Elementary School. Her entire body was still sore from pushing chest compressions as she worked to save Ethan’s life.

Speaking to Ethan’s mother Marla Miller at KCH the first time since the day of the emergency, Artrip said she pleaded with Ethan to stay strong as she replenished his lungs with oxygen during a rescue period that seemed like “an eternity.” When the emergency responders arrived at the remote rural school, Artrip was given affirmation that Ethan’s heart was still beating. Moments later, she delivered the news to Miller in the school’s parking lot, where the worried mother collapsed in a wave of panic.

Now, as a hospital heart monitor attached to Ethan beeped in a rhythmic pattern, Artrip could release a sigh — and a few tears — of relief.

“The truth is no matter how much fight he had in him, if you weren’t there, he wouldn’t be here right now,” Miller said. “You are my angel.”

Around 2 p.m. on Oct. 6, as students at Robinson Elementary were lining up from recess, a classmate spotted Ethan lying on the playground struggling to breathe. A teacher reached Ethan in time to hear him mention a feeling of “being hit in his chest” before he passed out.

As soon as the front office received an emergency call from the playground, Artrip bolted down the school’s main hall. After reading Ethan’s faint pulse, she utilized the school’s automated external defibrillator (AED) to shock his heart back into a regular pattern — a decision emergency responders and cardiologists at Kentucky Children’s Hospital credit with saving his life. With the help of another volunteer nurse who was visiting the school that day, Artrip continued chest compressions and rescue breathing until emergency responders arrived at the country school in Perry County.

“The whole time I am thinking, ‘Please, God, don’t take him. He’s just kid — he has his whole life ahead of him,’” Artrip said.

The moment Ethan’s heart beat out of sequence on the playground marked the first time his chronic heart condition disrupted his life since birth. As a newborn, Ethan was treated at the Kentucky Children’s Hospital neonatal intensive care unit (NICU) for an infection in his heart. Although Ethan recovered from the infection as baby, pediatricians were concerned with the long-term risks associated with a scar left from the infection. The abnormal tissue put Ethan at heightened risk of arrhythmia, an irregular heartbeat, which could one day result in a cardiac event.

Kentucky Children’s Hospital cardiologists Dr. Louis Bezold and Dr. Mark Vranicar, who travels to the KCH clinic in Hazard, followed Ethan’s case as he continued to grow older. Vranicar prescribed medications to help control the condition, and until the incident on the playground, Ethan lived a normal life.

According to Vranicar, a number of factors and influences might have triggered the ventricular arrhythmia in Ethan’s already vulnerable heart. Vranicar said the principal and school nurse’s assertiveness in retrieving the AED saved Ethan’s life, but also averted long-term damage to the lungs and brain.

“I believe it was life-saving in Ethan’s case,” Vranicar said of the AED. “And there may be other children that develop arrhythmias that could be saved by AEDs too.”

Estill Neace has served as the principal of Robinson Elementary School for four years and as a school administrator in Perry County for more than 20 years, and in that time he’s never had to access a school’s AED. Neace, who knows all 300 children at his school by name, followed the ambulance to Appalachian Regional HealthCare where the Pediatric Transport Team transported Ethan to Kentucky Children’s Hospital. In addition to the principal, Ethan’s homeroom teacher, physical education teacher and school nurse Artrip were aware of Ethan’s heart condition prior to the emergency. When Neace learned Ethan was the child down on the playground, he knew there was a chance they were going to need the AED.

“It doesn’t matter how small a school you are or how large, if there is one child that for whatever reason has his heart stop beating, (the AED) is the difference in that child having a chance to live,” Neace said. “You have to have it.”

Through Kentucky Children’s Hospital’s developing pediatric heart program with Cincinnati Children’s Hospital, Ethan underwent surgery Oct. 13 to receive an implantable cardioverter defibrillator (ICD). If his heart goes out of rhythm, the device will automatically administer a shock to bring the rhythm back to normal. Vranicar said the device serves as a reliable preventive measure to ensure Ethan’s safety no matter where he’s located in the event of cardiac distress.

“Obviously, we don’t want it to happen again, but despite what we do, there is still a chance,” Vranicar said. “We are treating him to prevent another episode. The goal is to get him back to where he was before and let him run and play and lead as normal a life as he can.”

Miller feels some comfort knowing the ICD will administer an automatic shock if Ethan is struck with another cardiac event. But she was most touched by the dedication to keeping her child alive demonstrated by the Robinson Elementary School staff.

“If he was home, he would have been dead because (we don’t have) an AED,” Miller said. “I can say I am not scared to send him back to school because I know they’ll do everything possible and more for my son.”