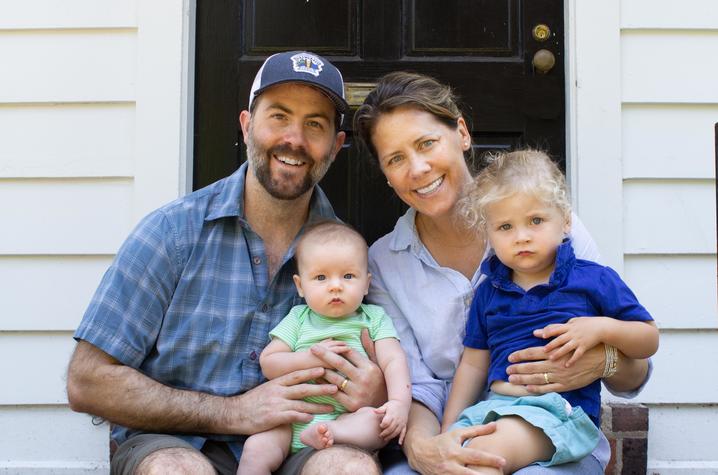 Doctors from maternal fetal medicine and the pediatric heart clinic teamed up to ensure that baby Asa was born with a healthy heart. UK Photo l Hilary Brown

LEXINGTON, Ky (Aug. 15, 2019) – In 2018, Greta Wright and her husband Tim received two surprises. The first surprise was finding out she was pregnant with their second child. The second, less joyous surprise was that Greta had a rare auto-immune disease called Sjogren's Syndrome, and it could be fatal to her unborn son.

"Needless to say, we were frightened and felt completely defenseless," said Greta.

Sjogren's Syndrome is an autoimmune disease that attacks the glands that make tears and saliva. It's a rare disease – affecting somewhere between five and 40 people out of 100,000. During pregnancy, certain proteins in the mother's blood can cross the placenta and damage certain organs in the fetus - the heart is especially susceptible. In a condition known as fetal heart block, the baby's heartbeat can slow to a dangerously low rate or even stop completely.

"The fetal heart is at risk to be affected, especially the nerve wiring system, which might lead to fetal heart block," said Dr. Majd Makhoul, pediatric cardiologist in Kentucky Children's Hospital Congenital Heart Clinic. "If this happens, the heart top and lower chambers don’t communicate with each other and that leads to decreased cardiac function and heart failure. This can lead to serious fetal complications and sometimes fetal death."

"One to three percent of women with Sjogren's will have babies affected with this electrical condition," said Dr. Wendy Hansen, an obstetrician in UK HealthCare's Department of Maternal-Fetal Medicine and chair of the Department of Obstetrics and Gynecology. "Although Sjogren’s was a new diagnosis, she could have had when she was pregnant with her first child and she simply didn’t know."

In order to ensure a safe pregnancy, Makhoul collaborated closely with Hansen. Though Sjogren's Syndrome is rare, the UK fetal cardiology team applied for a grant from the National Institutes of Health to participate in a large-scale national study of fetal heart block. The goal of the study is to better understand the risks and causes, and to find medical interventions that can reverse fetal heart block if caught early enough.

Greta was advised by Hansen to use an FDA-approved home Doppler machine two to three times a day to listen to the fetal heartbeat. Using sound clips of both normal and abnormal heartbeat as reference, Greta could send recordings from her home Doppler to both Makhoul and Hansen if she had questions about the regularity of the heartbeat. On one occasion, an irregular heartbeat concerned Makhoul enough that he advised Greta to come to the hospital where she was proactively treated as if the baby was affected by the Sjogren's. Less than 12 hours later, the baby's heartbeat stabilized and stayed normal throughout the rest of the pregnancy.

"Greta would come into each visit with a list of questions and articles she had read, makes me smile when I think about it," said Hansen. "Her and Tim's openness, sense of humor, positivity and great communication were their defining qualities."

In April of 2019, Greta and Tim's son Asa was born healthy with no complications. Makhoul attributes Asa's strong start to his dedicated and conscientious parents.

"Greta and Tim made our job easy by asking the right questions from early on and being deeply engaged at every step of the process," said Makhoul. "They were appropriately concerned and anxious at times but approached the situation with the right attitude and maximized their chance of having a healthy baby by adhering to our recommendations to the letter."

"Doctors Makhoul and Hansen made what could have been a horrible experience a great one," said Greta. "We felt like we were part of the UK family. We also knew that we didn’t have to worry about two separate teams of doctors – the Maternal-Fetal Medicine and the Pediatric Congenital Heart Clinic­­ – communicating with each other as we saw it happening proactively every day."