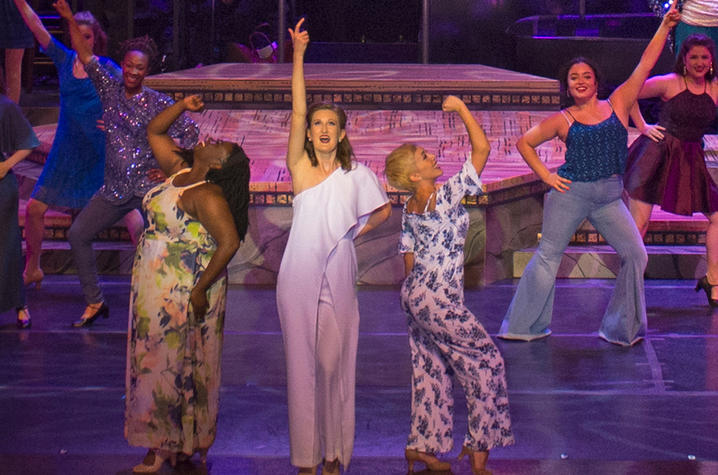 "Grand Night at Home" will come to close July 31 with a singalong edition.

LEXINGTON, Ky. (July 27, 2020) — As the heat of July kicked into full gear, the University of Kentucky Opera Theatre’s (UKOT) virtual “Grand Night at Home” series continued to bring all of the magic of “It’s a Grand Night for Singing!” into living rooms across the Commonwealth and beyond. This weekend this year’s virtual edition will finish with an opportunity to join in the fun.

The COVID-19 pandemic forced UKOT, like other performing arts organizations across the world, to cancel live productions for the foreseeable future. But for the past six weeks, UKOT has launched weekly videos as part of a “Grand Night at Home” series showcasing clips of past performances introduced by some of the beloved annual musical revue’s “all-stars." The videos gave fans of the show an opportunity to enjoy popular Broadway tunes and Top 40 hits performed by some of UK and Central Kentucky’s most talented vocalists while staying healthy at home.

While live performances may continue to be on hold, creative types all over the world continue to find ways to connect with their audiences through virtual performances. To close out “Grand Night at Home,” UK Opera Theatre will present a virtual version of the grand finale number from “It’s a Grand Night for Singing!” created from individual videos submitted by UKOT singers and community members performing the show. And just like at the live production, viewers at home are encouraged to join in the chorus of singers of the show’s namesake from Broadway musical “State Fair.”

To make this special singalong edition of “Grand Night at Home” possible, Wrigley Media edited UKOT’s individual videos to make it seem as though the performers are singing together virtually.

“Losing our opportunity to connect with the community was a difficult, sad realization,” UKOT Director Everett McCorvey said. “When Wrigley Media came to us with the idea to connect with the community virtually, we jumped at the opportunity. We decided to do so by singing the theme song from 'It’s a Grand Night for Singing!' As people hear this song wherever it is played, we want them to sing along! We hope this song lifts spirits and gives joy until we can be together again next year — live and in person.”

Wrigley approached UKOT in early summer to see how they could assist the program. “The arts are vital to our community and we feel they are even more imperative in times of hardship. Creating video for today’s media landscape is part of our corporate DNA, and we could not be happier about supporting LexArts and UK Opera with getting their messages out,” said Misdee Wrigley Miller, owner of Wrigley Media Group.

And like many of the UKOT’s faithful supporters, past “Grand Night” performer Linda Carey has appreciated the program finding ways of bringing "Grand Night at Home" to its fans.

“My few years being in the show were 'grand' experiences. Admittedly it was tough rehearsing, trying to keep up with the young, talented students, but each year the staff, the director, the choreographer, the stage manager, all were so organized, so professional. As a learning experience for all the participants, it couldn’t (be) more valuable. 'Grand Night’ has become an integral part of the community. Each year the productions get better and better — the talent just keeps coming. I would have hated for it to be discontinued. When we win the war against COVID-19, what could be more fun and joyous than to see or be in another ‘Grand Night’ production!”

Tune in and sing along with the “Grand Night at Home” finale on UKOT’s YouTube channel July 31.

And if you are looking for more entertainment from UKOT’s critically acclaimed opera vocalists, look no further than UKOT’s YouTube channel. The program has also added a selection of clips from recent opera productions for audiences at home to enjoy. Clips include performances from:

To view UKOT clips from these operas, visit and subscribe to UK Opera Theatre’s YouTube channel at www.youtube.com/ukoperatheatre.

To help UKOT continue to thrive during the pandemic, gifts can be made online.