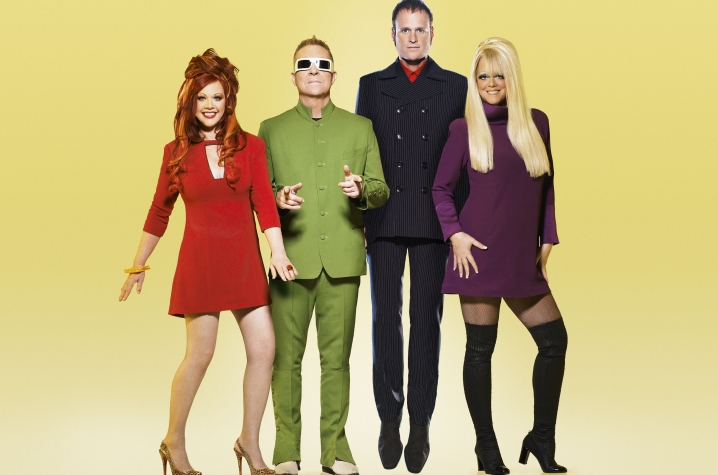 LEXINGTON, Ky. (Aug. 9, 2011) − Considered by many as one of the greatest party bands ever, the B-52s will bring their eclectic sound to a Bluegrass stage later this week. The legendary band will rock out University of Kentucky Singletary Center for the Arts starting at 7:30 p.m. Friday, Aug. 12.

Thirty years and more than 20 million purchased albums into their career, there is no doubt as to why the B-52s remain among the most beloved rock stars. Any mystery concerning the longevity and ongoing appeal of the band can be attributed to the B-52s concert experience. From the timeless gems of “Rock Lobster,” “Planet Claire” and “Private Idaho” to the more recent classics “Keep This Party Going,” “Love Shack” and “Roam," the B-52s' unforgettable dance-rock tunes start a party every time their music begins.

The band formed on an October night in 1976 following drinks at a Chinese restaurant in Athens, Ga. They played their first gig at a friend’s house the following Valentine’s Day. Naming themselves after Southern slang for exaggerated bouffant hairdos, the newly christened B-52s began weekend road trips to New York City for gigs at CBGB’s and a handful of other venues. Before long, their thrift store aesthetic and genre-defying songs were the talk of the post-punk underground. A record deal soon followed and their self-titled debut disc sold more than 500,000 copies on the strength of their first singles, the garage rock party classic "Rock Lobster" and "52 Girls." Not much later, the B-52s began to attract fans far beyond the punk clubs of New York's Lower East Side — galvanizing the pop world with a ‘stream-of-consciousness’ approach to songwriting and outrageous performance.

In 2008, the B-52s released their first new album in 16 years, "Funplex." With primal guitar hooks, driving drums and the B-52s’ vocal style, "Funplex" is recognizable as quintessential and contemporary B-52s. Newsweek magazine declared, "Like a sonic shot of vitamin B12, the dance floor beats, fuzzy guitar riffs and happy, shiny lyrics keep the energy going."

As the B-52s continue to take their party-music revolution into the 21st century they show no signs of slowing down, serving up their own blend of music and showmanship to millions of fans around the world.

To check out videos of some the B-52s hits, visit the band's website at http://theb52s.com/video.

Tickets for the B-52s concert are on sale now and range from $27 to $45 depending on seat location. Tickets can be purchased by calling the Singletary Center ticket office at (859) 257-4929, visiting online at www.singletarytickets.com or in person at the venue.