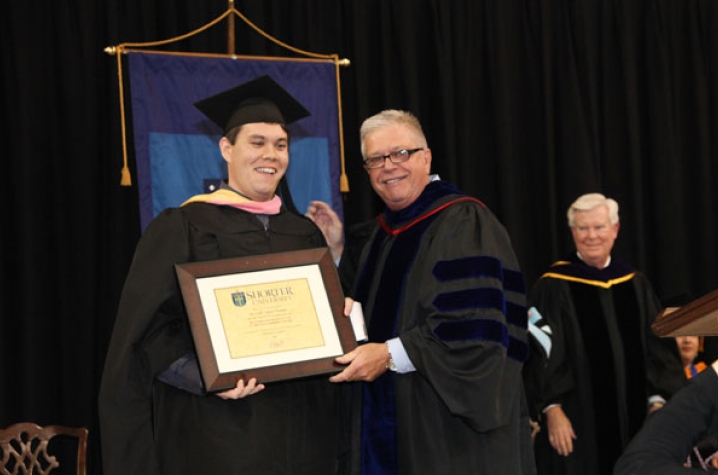 LEXINGTON, Ky. (July 26, 2011) − Yuell "Chuck" Chandler, assistant professor of voice at Shorter University and doctoral candidate at the University of Kentucky School of Music, has been awarded the Vulcan Materials Teaching Excellence and Campus Leadership Award. The $1,000 cash award is given to a junior faculty member at Shorter University who displays strong campus leadership, creative course development, pioneering teaching methodology and instructional support along with model classroom teaching. The award also recognizes faculty who are helpful in advising students and illustrate a willingness to spend individual time with students in order to assist them academically.

Before his arrival at Shorter University, in Rome, Ga., three years ago, Chandler taught applied voice at North Greenville University and the Alia Lawson Academy of Music at Converse College and held a full teaching assistantship at UK.

Chandler realized his passions for the arts at an early age, saying, "I sang in church choir, then followed my best friend into the middle school chorus. I stayed in chorus in high school and had two amazing and inspiring teachers. Because of the inspiration and love for music my chorus teachers instilled in me, as well as having voice lessons at Converse College, I fell in love with singing."

Among his many accomplishments, Chandler is an active performer throughout the southeast in opera, oratorio and recitals and has also made recent appearances with the Rome Symphony Orchestra, Louisville Ballet, Louisville Philharmonic Orchestra, Atlanta's Chorale II and UK Opera Theatre. Chandler's international appearances include concerts in Russia, Vietnam, and a concert tour of Germany and Austria. One of the highlights of Chandler's operative career was an appearance in Kentucky Opera's production of "Samson et Dalila" with internationally recognized mezzo-soprano, Denyce Graves.

As an avid performer of oratorio and concert repertoire, Chandler’s credits include Obadiah in "Elijah," Uriel in "The Creation," the tenor solos in George Frideric Handel’s "Messiah," Giacomo Puccini’s "Messa di Gloria," Camille Saint-Saëns’ "Christmas Oratorio," and two world premiere performances; one of composer, Jocelyn Hagen’s song cycle for tenor and soprano, “The Time of Singing Has Come," and the other a concert opera commissioned by the Georgia Music Teachers Association titled "Toowhopera" written by Georgia composer, Sorrel Hayes, in which Chandler premiered the role of Spamonti.

Chandler is also an active member of the National Association of Teachers of Singing where his students continue to win top awards at both the state and regional levels of the (NATS) voice competition. His students also have been finalists and won awards in other competitions including the Orpheus Vocal Competition and the Lexington Bach Competition.

Chandler received his undergraduate degree in vocal performance from Florida State University and a master's degree in vocal performance from UK. He has also received levels one and two certifications in singing voice specialist training, which focuses on working with injured voices to improve their singing as part of the recovery process. Chandler is currently in his clinical fellowship for the third and final stage of the certification in singing voice specialist training.

The award-winning UK School of Music is one of four academic programs at the UK College of Fine Arts.