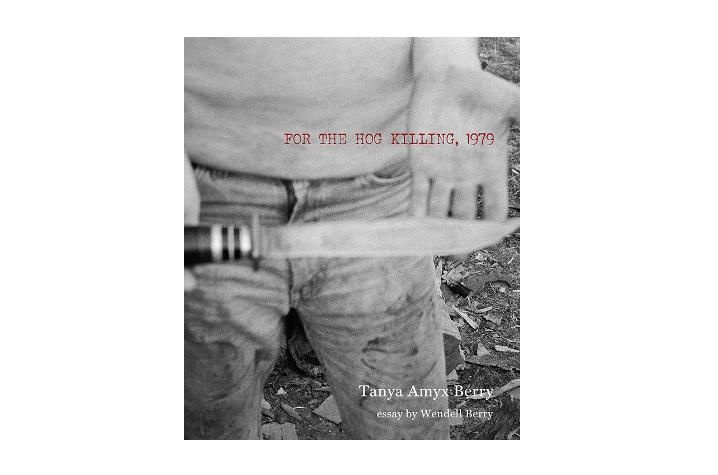 Tanya Amyx Berry has published a collection of photographs in a new book by University Press of Kentucky. These photographs are accompanied by an essay and poem by Wendell Berry.

LEXINGTON, Ky. (Nov. 5, 2019) — In 1979, Tanya Amyx Berry was given a camera by New Farm magazine to capture images of Kentucky farmers at work. Over two days at the farm of Owen and Loyce Flood in Henry County, she recorded the culmination of a year’s labor raising livestock. These photographs have recently been published for the first time in a new book by University Press of Kentucky.

In Tanya Amyx Berry’s “For the Hog Killing, 1979,” these compelling photographs, accompanied by an essay and poem from Wendell Berry, illustrate the American agrarian practice of neighbors gathering to perform one of the most ceremonious jobs of farm life and the communal effort toward a common wealth.

“The traditional neighborly work of killing a hog and preparing it as food for humans is either a fine art or a shameful mess. It requires knowledge, experience, skill, good sense, and sympathy,” writes Wendell Berry in the essay portion of the book.

Called a “meditation on the profound importance of community” by author Silas House, Berry’s book has also garnered advance praise from actor and “Look & See” co-producer Nick Offerman, who described it as “an imperative and moving portrait.”

This is Berry’s first published book and one of the first releases for Fireside Industries, a University Press of Kentucky imprint in partnership with Hindman Settlement School. Fireside Industries’ mission is to advance the Appalachian literary tradition into the 21st century with new literary works and reissues of classics that contribute importantly to the region.

Tanya Amyx Berry is an artist and agrarian deeply entwined with the Kentucky community, human and natural, surrounding the hillside farm she shares with her husband, Wendell Berry.

Editor Ben Aguilar, grandson-in-law to Tanya and Wendell Berry, is a multimedia specialist with a focus on agrarian and landscape photography. His photographs have appeared in Rural Heritage magazine, Garden and Gun and the photo collection Reciprocal Failure.

Tanya Amyx Berry is slated to appear at this year’s Kentucky Book Festival, presented by Kentucky Humanities, which runs from Nov. 10 to Nov. 16. Her photographs are on display in Lexington at the Pam Miller Downtown Arts Center until Nov. 9.