LEXINGTON, Ky. (April 6, 2021) — University of Kentucky School of Music alumnus Tyler Swick has been selected as one of Yamaha's "40 Under 40," which celebrates outstanding music educators who are making a difference by growing and strengthening their music programs.

There doesn’t seem to be enough superlatives to describe Tyler Swick’s energetic, entertaining and exhilarating teaching style. And accolades from parents and colleagues are just as numerous. In several of his “40 Under 40” nomination letters, parents called him a “musical magician” and noted “his work ethic knows no bounds when it comes to ensuring he gets a smile out of a few extra kiddos.” Another parent simply stated, “It doesn’t feel like learning when it’s this fun!”

Fun is a big part of Swick's Orff-based music classes at Ellis Elementary attended by more than 700 students in Henderson, Nevada, and his growing YouTube channel, Swick’s Classroom, which has videos of catchy songs that showcase his “cutting-edge creativity and a self-taught knack for audio and video production to create highly entertaining educational material,” according to another nomination letter.

Swick, who earned his bachelor's degree in music education from UK's College of Fine Arts in 2012, said he started the channel when “I went on paternity leave and wanted my students to continue to receive high-quality Orff xylophone instruction.” The channel now has almost 3,500 subscribers and more than 500,000 total views.

“The songs and videos are vehicles to get my students engaged,” Swick said. “The lesson may be about quarter notes but that’s hidden inside of a song about spending winter on the beach. The Halloween songs really get the students amped up about October. They get so excited to see the Chihuahua that I can sneak in learning about clave rhythms, shaker technique and minor keys!”

Swick writes and records songs quickly. For example, he had the idea for “The 12 Days of Google Meets” on a Wednesday night, and it was on YouTube by Friday morning. “When I’m excited about a concept, I’ll skip sleeping to get the project done,” he said. In one month, that particular video had over 12,000 views.

In May 2020, Swick received the “Heart of Education” award by The Smith Center. He used the $1,000 prize to purchase each Ellis Elementary student a pair of drumsticks, a scarf and a shaker, items that he calls for them to use during his remote learning classes.

“We are very lucky to have Mr. Swick at Ellis Elementary. His kindness, creativity, encouragement and support are wonderful examples for my daughter — and all the students — to follow,”  wrote another parent. 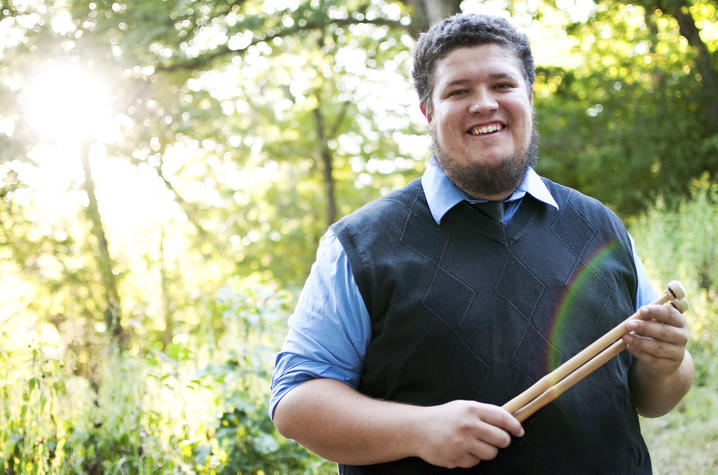