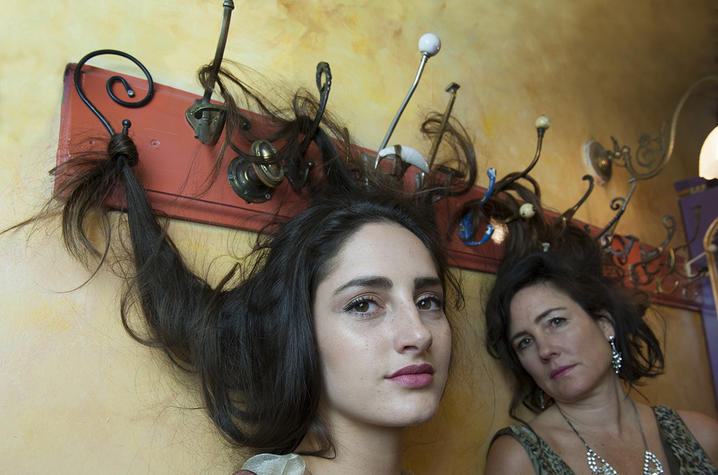 LEXINGTON, Ky. (Feb. 18, 2020) — Celebrated British artist Denise Webber will visit the Bluegrass this week as part of the University of Kentucky’s School of Art and Visual Studies Visiting Artist Series. In conjunction with the opening of the free public exhibition “Denise Webber: Life Lines,” running Feb. 21-March 21, in the Bolivar Art Gallery, the artist will give two free public talks Feb.18 and 22.

Tonight at 21C Museum Hotel, Webber's discussion will focus on the video animation “Clay” (1998) in which she repositions the 19th century still photographs of Eadweard Muybridge. This talk will begin at 7 p.m. At the UK Bolivar Art Gallery talk scheduled for noon Friday, Feb. 22, she will discuss her exhibition “Life Lines,” exploring the female body and its complicated relationships to beauty, creative authorship and power. Both talks are free and open to the public.

Curated by Stephen Wrentmore, who teaches directing and Shakespeare at UK Department of Theatre and Dance, the UK exhibition represents a new collaboration between two programs within the College of Fine Arts with support from Medici Twenty.

Working with photography, drawing, audio and video, Webber spent her early years living in Cyprus until the outbreak of war. She and her family were evacuated under shell bombardment on the last British convoy to leave the city in June 1974.

Webber studied both fine art and history of art at Reading University in the United Kingdom, subsequently setting up a studio in Somerset. Moving to London, she trained as an AVID film editor with the Women’s Audio-visual Education Scheme and started editing short broadcast dramas and documentaries for young independent directors and producers. At this time, she also produced her two main video works, “Clay” and “Weight,” and became part of the flourishing creative scene around Hoxton Square. Webber’s work focuses particularly upon women's experiences of liberation, transition or transformation.

Webber has taught fine art and media production at University of East London and what is now the London Metropolitan University. Through this time, she continued to develop her creative practice and began to travel extensively internationally. This process of travel, for commissions and contracts, focused her concentration on photography and collage and also forced her to confront, as she does in her work, the sense of alienation found in ubiquitous hotel rooms.

These experiences also inspired a body of work where Webber confronts her agoraphobia creatively while remaining trapped and confined in her hotel room. In her most recent work, she has reintroduced the discipline of drawing, and so her story loops, and her practice develops, an ever-evolving process of discovery and expression.

Webber has exhibited widely with work featured in exhibitions at London’s Tate Modern, Stockholm’s Moderna Museet, Hobart Centre for the Arts in Tasmania, and the Museum of Contemporary Art in Melbourne. “Clay” is represented in the Arts Council Collection and the Tate Archive.

Stephen Wrentmore is a theatre director, producer, writer and change consultant. Before coming to UK, he previously served as the artistic producer at Lighthouse, Poole’s Centre for the Arts; associate artistic director of Arizona Theatre Company; and artistic director of the Byre Theatre in St. Andrews. Wrentmore has also worked at The National Theatre in London, BAM in New York, and internationally in professional theatres from Siberia to San Francisco.

In the visual arts, Wrentmore worked throughout 2008 with Tate Gallery and with The Garage Moscow on their Mark Rothko exhibition. At Lighthouse, he curated exhibitions by Ineke Van der Wal, Denise Webber and Graham Piggott.