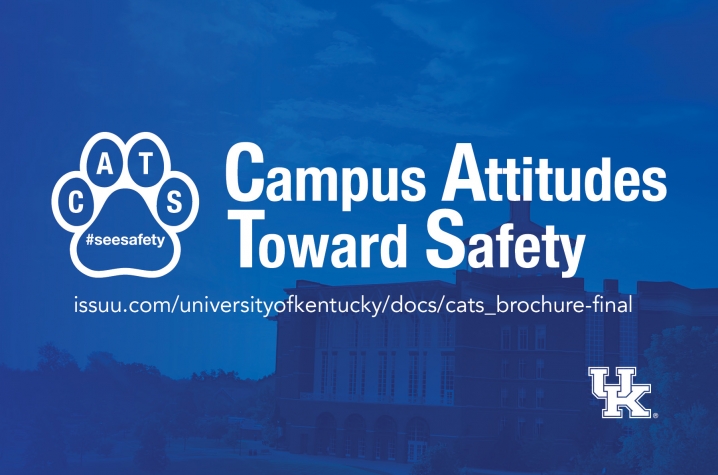 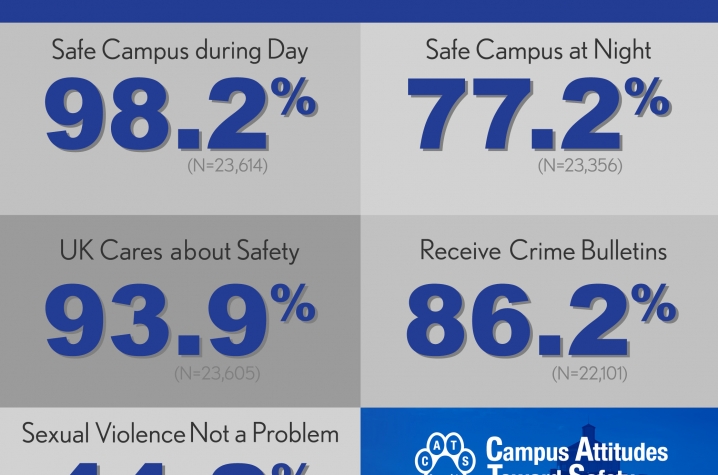 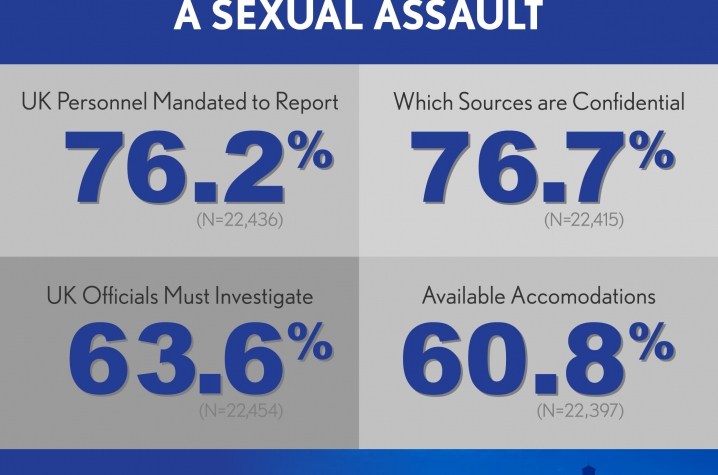 LEXINGTON, Ky. (Feb. 1, 2016) — Last spring, University of Kentucky President Eli Capilouto and endowed faculty of the UK Center for Research on Violence Against Women initiated the first Campus Attitudes Toward Safety (CATS) survey, with preliminary data being released last fall that showed that more than 90 percent of UK students believe their campus is safe and officials are responsive to safety concerns.

However, much work remains to be done, Capilouto said, as too many students say they don't know what resources are available for reporting instances of sexual assault or bullying. And far too many students say alcohol or other substances are abused, increasing the risk of victimization and other serious problems.

"The University of Kentucky is committed to putting students first," Capilouto said. "We have been a leader in this field, and this survey allows us at the granular level to get the information we need to respond. When we learn how these things happen, where these things happen, who they are reported to, why people don’t report — all of those little junctures along the way where you would want to intervene — we have more information about how to focus intervention."

More than 24,000 UK students completed CATS in the spring 2015 semester. UK officials believe the university is among the first in the country to undertake a mandatory campuswide survey regarding sexual assault and campus climate. It is the first of five annual CATS surveys, funded by the president's office.

Now, the university is using this data — among the most in-depth surveys regarding safety in American higher education — to address UK students’ personal safety. Key recommendations that the university is working to implement include:

View an executive summary of the results and recommendations.

"President Capilouto is invested in the five-year process because he's interested in seeing whether there is institutional change," said Diane Follingstad, director of the center. "Can we demonstrate changes? Can we show improvements? Can we show rates of violence going down? Can we see attitudes changing over time? You can only know that if you look over time to see what happens."

Early data indicated that 4.9 percent of students reported having an unwanted sexual experience, which was comparable to national samples using similar measures. Other key results from the more in-depth analysis of the data include:

"We know that there's a very big intersect between substance abuse and sexual violence," Follingstad said.

"You have a choice — a choice that involves a public route or a confidential route," said Charley Carlson, senior vice provost for Academic Excellence and psychology professor. "If you choose the public route you have two options: report to the Title IX office or campus police. Both of those result in administrative actions that are public. If a student would like to discuss the issue in a confidential manner, then it should be reported through the UK Violence Intervention and Prevention (VIP) Center, the UK Counseling Center or University Health Service."

"Those are my peers, they’re my classmates, they’re my friends from the dorms or my friends from the Honors Program," said Jenna Hollinden, a UK senior and vice president of the Student Government Association. "They're people who are connected to the university and they’re stakeholders in this student experience. I expect my university to do all that they can for students, and having UK conduct a survey of this magnitude is absolutely crucial to me as a student. It makes me feel safe, it makes me feel that they want my experience to be a positive one, not only in the classroom and when I’m on campus, but no matter where I go as a student. The data isn't just going to a research center — it’s affecting me and my time here at UK. I would encourage all students to look at the survey as an opportunity."