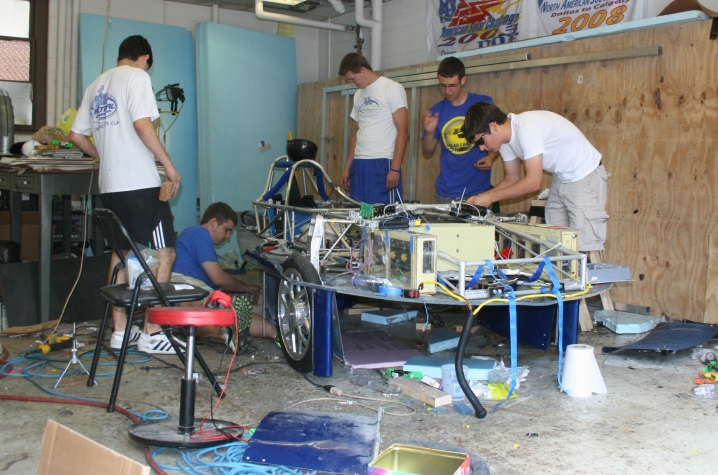 LEXINGTON, Ky. (June 15, 2010) - The University of Kentucky Solar Car team has been working day and night these past few weeks to finalize the details on their car, Gato del Sol IV, before the racing competition officially begins this week at Motorsport Ranch in Cresson, TX.

The team has been in Texas since June 11, with the solar car undergoing a series of tests for technical and safety specifications. On Wednesday, June 16 they will compete in the Formula Sun Grand Prix, the qualify race for next week's American Solar Challenge. They will be racing against 17 other teams from across the country.

The American Solar Challenge is a 1,200-mile, seven-day race from Tulsa, Okla. to Chicago that will be held June 20-27.

"It's always nice to show people that Kentucky has people who defy the stereotypes of our state - we are just as serious about engineering as everyone else, if not more so!" said Kassy Lum, one of the team members. "As a driver, I am really excited to take the car out for a spin--especially around the race track, so we can see just how well our designs worked. Meeting people is great too. I love meeting other solar car teams . They know what it feels like when the electronics suddenly bomb, or how helpless you feel when a design fails. We get to see each others views and ideas at the race and share our experiences so we can do better the next year."

The UK Solar Car, which weighs about 470 lbs without a driver, runs on lithium-polymer batteries, which are similar to what is found in laptops and cell phones. There are 1776 solar cells and 308 batteries, and the car runs from power that comes in from the solar cells and is sent through a wire to the motor. When driving the car, the team tries to operate with just this energy. If the solar cells cannot provide enough power (such as from accelerating or fast driving), then the extra energy will come from the batteries. Conversely, if all the power the solar cells are producing are not needed (such as during braking or sitting at a stoplight), then the batteries are charged. This is all controlled by the car's onboard computers, so the driver can focus on driving.

The design, construction and racing of the UK solar car are completely student-run, and operate as part of the UK College of Engineering.

"Everything about this project is hands-on, trial and error," said Lum. There are no grades, pop-quizzes or exams. You either fix it and get it done, or the car doesn't work. Earning the accomplishment of having the car in racing condition, passing scrutineering, and placing in the race is the mark - and everyone aims high."

Sixteen of the team members will be participating in the challenge, taking turns driving the car. Sam Nicaise, manager of the team, says their goal is to finish within the top five.

"We have put considerable time into building Gato del Sol IV," said Nicaise. "It will be the UK Solar Car team's most technologically advanced and best engineered car to date, and we expect it to perform very well among the entrants. We hope to be a testimony to the quality of UK and show our supporters all that we have accomplished."

A budget of over $200,000 was raised by the team members and provided through over 30 sponsors.

To view a video about this year's UK Solar Car team, visit www.youtube.com/watch?v=yp5J1bwdjf0.