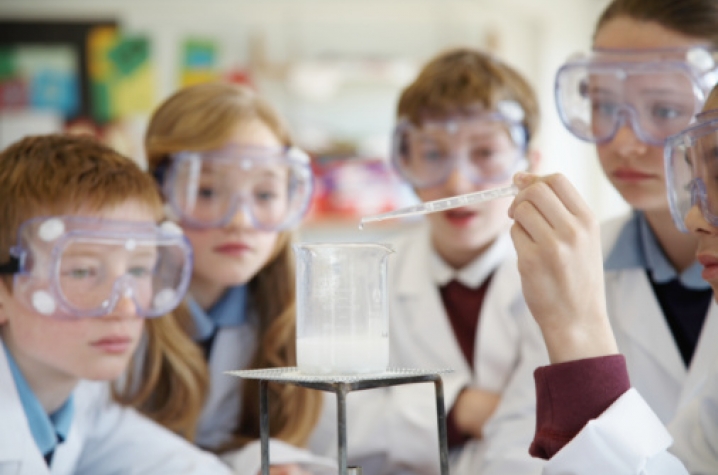 LEXINGTON, Ky. (April 6, 2011) − In the mid-1990s, students in rural Knott County's Jones Fork Elementary School weren't getting much hands-on science education. Science lessons, mostly taught straight from textbooks, were rolled into the general curriculum along with language arts and social studies. Loretta Shepherd, who has taught at the school for 35 years, remembers the environment then.

"Science was mostly incorporated into their whole schedule. We really stressed reading and math more than science," she said. "There wasn't as much interest, not as many materials."

But a program called the Appalachian Rural Systemic Initiative (ARSI), sought to change that. ARSI was a 10-year effort funded by the National Science Foundation (NSF) to improve science and math education in some of the poorest rural counties in the country. Funding went to schools in the Appalachian regions of Kentucky, Ohio, North Carolina, Tennessee, Virginia and West Virginia. Jones Fork was one of the first schools in Kentucky to receive funding and support through ARSI and the ARSI Resource Collaborative office housed at the University of Kentucky. Jones Fork served as an example of change for other schools in the region.

ARSI Resource Collaborative Director Kim Zeidler-Watters, along with Jones Fork and Knott County School District leadership, leveraged grant support and other funding that allowed for the acquisition of new equipment and a science lab, created an outdoor classroom and provided educational materials formerly unavailable to students in the economically disadvantaged Appalachian region. The program provided specialized training to science teachers, who were then paired with other teachers to help them make important changes in their classrooms. It linked the isolated Appalachian schools to universities, providing professional development for teachers like Shepherd.

After an initial five-year period, Kentucky received a renewal for five additional years of ARSI support. The 10-year program was followed by five years of support from the Appalachian Math and Science Partnership (AMSP), which sought to continue the successes of ARSI. Fifteen years of sustained support in math and science education reform, coupled with the tireless efforts of teachers and administrators, delivered impressive results.

Jones Fork was one of only seven elementary schools statewide to achieved 100 percent proficient or distinguished scores on standardized science tests for the 2009-10 school year. Even more impressively, five of those seven schools are in Appalachia, an area that historically has trailed the rest of the state in student achievement. Jones Fork's science academic index — a measure of how well an entire class of students performs — rose from 54 percent in 1999 to 130 percent in 2008, out of a possible 140.

These increases reflect a changed culture that supports high student achievement in science. It's a change that began in individual classrooms.

Meeting a need in Appalachia

Zeidler-Watters, now director of the P-12 math and science outreach unit at the University of Kentucky's Partnership Institute for Math and Science Education Reform (PIMSER), remembers when ARSI began at Jones Fork. The geographical isolation of Appalachia, she said, meant few opportunities for teachers to receive professional development training.

"One of the biggest challenges was their limited access to high-quality, professional learning experiences for all of their science teachers," she said.

ARSI and the Resource Collaborative provided training for 'teacher-partners,' or teachers who were released from part of their own teaching responsibilities to help train science teachers in Appalachia. Shepherd was matched with teacher-partner Evelyn Mayer.

"We would help Evelyn with content knowledge, how to teach quality science and provide leadership," Zeidler-Watters explained. "She was released from her teaching responsibilities half-time, but was so successful in helping science teachers that she was later released full-time. Then she was able to write some grants for the school, to bring them more resources."

Zeidler-Watters said that in a small school with few financial resources, spending a lot of money on one area — particularly a high-cost area like science — wasn't an option. The grants Mayer wrote brought the kids resources they wouldn't have had otherwise.

"One grant helped them improve their outdoor classroom. That's important because it's hard to load the students up and take them anywhere — it's such a long way," Zeidler-Watters said. "They were also able to put in a science lab, fully supplied with kit-based materials. The teachers got access to high-quality materials to teach science effectively."

With support from Frieda Mullins, Jones Fork's principal at the time, Mayer utilized her ARSI training and began transforming the learning process at the school.

A change in approach

Mayer said the biggest change was getting students to ask questions, and identify and solve problems themselves. This was a different approach from textbook-based learning.

To do this, Mayer engaged in team teaching and classroom modeling with Shepherd. Mayer passed on the training she'd received from ARSI, helping Shepherd change the way she approached science teaching.

"It offered more activities and more meaning to science," Shepherd said of the new teaching method. "I was coming from the old school, with just textbooks. It made me more aware of the opportunity for kids to do hands-on things. It was a different way of presenting materials, ideas and concepts."

Shepherd said the students began to understand how science was important in their daily lives. The class tested water quality in their community, and used story book themes to test science concepts. One experiment, using a Humpty Dumpty theme, involved dropping eggs onto various surfaces to see which would make the eggs break and which would not.

"I think it made them aware that science can be fun, and it can be a learning opportunity at the same time," Shepherd said. "Anytime that you're doing things that pertain to you personally, then I think you have a better grasp of it."

For Mayer, ARSI meant bringing professional development opportunities to the small, rural schools that needed them most. "In eastern Kentucky, we are very rural. A lot of the teachers did not like to go out of the area for professional development," she explained. "ARSI brought so much to us, so many opportunities. For me personally, it was an opportunity I would have never had, had it not been for ARSI and the training from them."

Mullins and Mayer worked hard to bring technology into Jones Fork classrooms, Zeidler-Watters said. Mayer also got math teachers involved in ARSI training that helped them with teaching strategies and content knowledge. The school utilized results from a math and science program improvement review to strength those areas.

"Evelyn and Frieda worked together to make sure more teachers had access to the latest resources and best practices for teaching high-quality math and science in their classrooms," Zeidler-Watters said. "They worked very hard to get technology resources into the school, and to train teachers on how to use the technology. That technology and those science kit resources still exist in the school today."

Mullins said the addition of technology to the classrooms at Jones Fork was particularly important. "Technology in the schools was not a totally new concept, but it was fairly new," she said. "And the technology wasn't being used effectively."

ARSI funds helped change that by providing graphing calculators to the students, for example, as well as training for teachers on how to use them.

Even after the ARSI program was complete, changes to the science and math curriculum in schools like Jones Fork remained in place. One example is 'monthly cadres' that still take place in the region. These offer continuing education for teachers each month to increase their knowledge in science and math.

"They bring in teacher leaders, individuals that they have released like Evelyn that lead the cadres," Zeidler-Watters said. "They are continuing to develop and raise the ceiling of expertise for leaders in their schools. That's a direct result of what ARSI started."

High school science and math programs in particular, she said, have continued to flourish. Diane Johnson taught high school biology and chemistry for 25 years and served as a teacher-partner in Lewis County during the ARSI years. She said partnerships with university personnel have continued as a result of the program. And the emphasis on best practices has continued since the program ended.

"In the past, there was never an emphasis on that," Johnson said. "We have selected better materials because of the training that teachers have gotten. I think the legacy for all teachers who have been involved is better instruction, better student achievement and more students going into the STEM areas (science, technology, engineering and math)."

Another lasting change has been the inquiry-based teaching methods Shepherd learned from Mayer. Teachers throughout Appalachia learned to more effectively teach science through the ARSI program.

"You don't learn what you're told. You learn what you find out for yourself — over and over," Mullins said. "A lot more teachers are using inquiry-based techniques."

Johnson believes that most of all, the program brought more resources to the rural Appalachian mountains.

"Prior to ARSI, there was never anything in our area — no specific professional development, no ongoing support, and limited ties to universities. You were really isolated," she said. "I think that's a lasting impact — we're not isolated anymore."