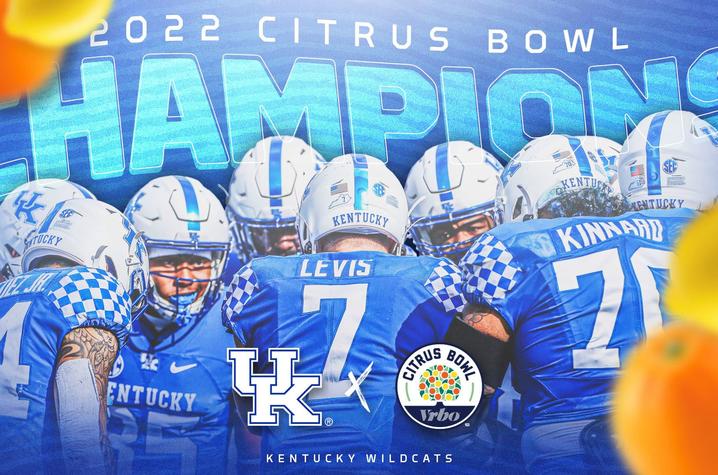 University of Kentucky went into its high-paced offense with just 3:31 to play in the game. The Cats drove down the field behind the Will Levis-to-Wan'Dale Robinson connection. Perhaps the biggest play came when those two connected on a 52-yard pass play down the left sideline that got UK to the one yard line. After a penalty, UK handed the ball to Chris Rodriguez Jr., who took it in from six yards out for the touchdown. Matt Ruffolo added the PAT and UK led 20-17 with 1:48 to play.

Iowa would go into its two-minute offense on the ensuing possession and the Hawkeyes were able to get near midfield pretty quickly. But on second and five from the UK 40, Yusuf Corker hit Iowa quarterback Spencer Petras, whose throw went high and was intercepted by DeAndre Square, sealing the victory with just 48 seconds to play.

Levis connected on 17 of 28 through the air for 233 yards and a touchdown, with one interception. His primary target was Robinson, who caught 10 passes for 170 yards, including that crucial 52-yard reception in the fourth quarter that set up the go-ahead score.

Rodriguez Jr. rushed 20 times for 107 yards and a score. C-Rod also caught a touchdown pass in the game.

With the win, Kentucky has now won four consecutive bowl games for the first time in school history.

On defense, Jordan Wright led UK with 10 tackles while Corker had eight.

Iowa got the first possession of the game and made one first down before being forced to punt.

Kentucky got the ball on its own 20 and the Cats proceeded to put together a very impressive scoring drive. The Cats covered 80 yards in 13 plays, which included seven rushes and six passes. Levis was six-for-six on the drive for 41 yards, while Rodriguez carried four times for 28 yards. At the end of the drive, those two connected on a five-yard touchdown pass to get UK on the board. Ruffolo added the point after and Kentucky led 7-0 with 5:32 left in the first quarter.

Kentucky would lead 7-0 after one period of play.

Iowa would get on the board on its next drive. The Hawkeyes drove into the UK red zone before the UK defense held, forcing the Hawkeyes into a 28-yard field goal by Caleb Shudak, which was good, cutting the UK lead to 7-3 with 11:03 left in the half.

The Cats would answer on their next drive. Kentucky would overcome a couple of sacks with a third-and-26 conversion where Levis connected with Robinson for a 34-yard gain. UK would get inside the Iowa five yard line, but was forced to settle for a 21-yard Ruffolo field goal, which was good, extending the Kentucky lead to 10-3 with 2:48 left in the half.

On Iowa's next possession, Iowa's Petras tried a pass to the left, but UK's Wright tipped it and linebacker D'Eryk Jackson intercepted the pass, returning it to the Iowa 31.

Kentucky got the ball with 2:09 left in the half. UK got a big rush from Ju'Tahn McClain, got a 10-yard penalty on the Hawkeyes, then got a five-yard rush from Rodriguez to get to the Iowa six. But the Hawkeyes defense got a stop and UK settled for a 27-yard field goal from Ruffolo to take a 13-3 advantage with 38 seconds remaining in the half. That would be the score at the break.

In the second half, Kentucky took possession first. After getting two first downs, the Cats were forced to punt.

After taking over, Iowa assembled one of its better drives of the game. The Hawkeyes went 69 plays in seven yards, getting to the UK five. But on fourth-and-one, the UK defense came up with a stop and took over on downs.

Kentucky could do nothing with its next possession and the Cats punted with Iowa taking over at midfield. The Hawkeyes would take advantage of the good field position. Iowa would cover 50 yards in six plays, ending with a 20-yard touchdown rush from Arlen Bruce. Shudak added the PAT and the UK lead was cut to 13-10 with 3:21 left in the third quarter. That would be the score after three quarters.

Early in the fourth quarter, Kentucky would punt again. Iowa would waste little time getting into UK territory. The Hawkeyes would take their first lead of the game when Petras connected with tight end Sam LaPorta on a screen pass that LaPorta took down the left sideline for a 36-yard touchdown. Shudak added another extra point and Iowa led 17-13 with 10:54 to play.

Kentucky would take the next possession and get into Iowa territory. But on fourth and one from the Iowa 35, McClain was stopped and Iowa gained possession with 7:13 to play.

The UK defense stood tall on the next Iowa possession. On third-and-one from the Iowa 44, freshman Tre'vonn Rybka stopped Iowa running back Leshon Williams for a one-yard loss, forcing the Hawkeyes into a punt. That would set up the winning drive.

With the win, Kentucky earned 10 wins for the second time in four years and just the fourth time in school history.