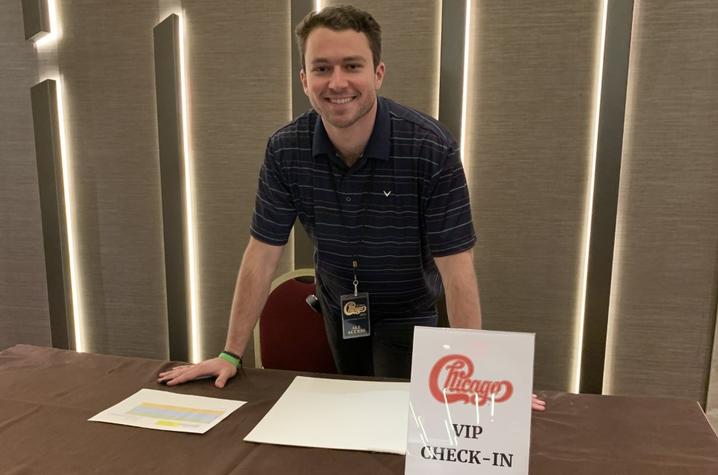 LEXINGTON, Ky. (June 22, 2022) — What started off as a standard class presentation led to a University of Kentucky College of Communication and Information alum finding a place for himself with one of the longest-running and best-selling American rock bands of all time.

George Cranwell, a 2021 integrated strategic communication (ISC) graduate, joined the Rock and Roll Hall of Fame band Chicago shortly after earning his degree from UK. He now serves as the band’s assistant production manager. How he got there though directly ties back to his time in the classroom.

During his senior year in an ISC event planning class, Cranwell got to meet the man who would help land him with Chicago, Beau Loendorf. As the co-founder and lead coordinator of the wedding planning business Big and Little Events, Loendorf gave a presentation to Cranwell’s class. Cranwell was so impressed with the presentation that he jumped at the opportunity when Loendorf was looking for a Big and Little Events intern.

While serving as a Big and Little Events intern during his final semester of a five-year journey at UK, Loendorf approached Cranwell with yet another employment experience. Along with heading up Big and Little Events, Loendorf is also the director of VIP programming and touring planning for Chicago. After being impressed by Cranwell’s energy, passion for helping others and openness to learn, Loendorf offered the college senior a summer trial run with the band.

Cranwell’s week and a half-long shadowing with the band was a success. In August 2021, he became a full-time member of the production team.

“I’m so lucky that I found Beau and I reached out to him to apply for the internship and that he gave me the opportunity to work for him, intern for him,” Cranwell said. “For him to give me that opportunity further than the internship and invite me out to Chicago, I’m so thankful and so lucky for that. If I didn’t do a fifth year at Kentucky, I don’t think I would’ve met him. So maybe the fifth year was a good thing.”

Since joining the band’s crew nine months ago, Cranwell has been thrust into tour life, traveling across the country to help the band entertain their legions of fans. Despite this being his first management and entertainment job, he has a hefty set of responsibilities on the road.

The band travels with three semi-trucks worth of gear, which includes 10 wardrobe cases that Cranwell is responsible for strategically organizing at the venues during load-in. In addition to setting up the band members’ dressing rooms to fit their necessary accommodations, he also handles the band’s hospitality, complimentary ticketing and post-show meals. Along with this, he runs the VIP experience before the show where he greets guests, gifts them swag bags, gives them a tour of the set along with information about the band and takes pictures of them on the stage. This experience is something friends and family of the crew and band can also experience with their guest passes, which Cranwell also helps to organize for the band. He said that sometimes it can be hard to coordinate things to the expected level of excellence at every venue, but that’s the name of the game.

“You gotta improvise, gotta do the best you can,” Cranwell said. “It’s all about making these guys happy and I think I’m doing a pretty good job at it.”

Besides the bonus of traveling and meeting new people at every venue, Cranwell’s favorite part of the job is getting to personally know the band members and see first-hand the impact their music has made. From hearing stories about Chicago’s music playing at weddings to helping people power through chemotherapy, Cranwell learns more every day about how the band he works with affects people’s lives. Although he’s grateful for all the opportunities Chicago is giving him, he says his work doesn’t even feel like a job, and he wouldn’t have it any other way.

“It’s really an honor to work for a group that is as incredible as Chicago,” Cranwell said. “These guys have been going for 55 years. It’s a great team out here, and we’re a family.”