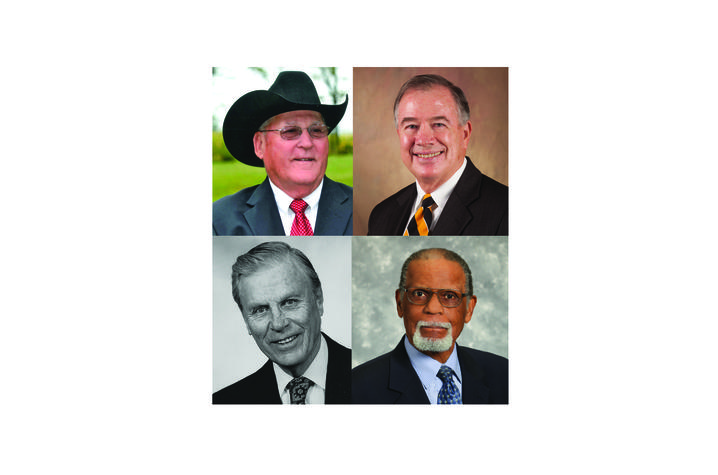 LEXINGTON, Ky., (Jan. 20, 2017) — The University of Kentucky College of Agriculture, Food and Environment inducted four new members to its Hall of Distinguished Alumni. This year’s recipients include a university chancellor, college dean and advocate for African Americans in agriculture, beef breeder, and an agricultural economist.

Charles E. Boyd returned to Mays Lick, Kentucky, after graduating from the UK College of Agriculture, Food and Environment in 1964, where he then built the family’s cattle enterprise into the well-known and respected beef operation it is today. Boyd Beef Cattle is recognized as one of this nation’s top seed stock producers of two major beef cattle breeds. He also worked tirelessly in promoting and advancing livestock and he built a true family operation for future generations. Boyd mentored youth and adults in livestock evaluation and in profitable production and management of quality cattle. He hosted and made his cattle available for 4-H, FFA and collegiate judging teams from more than 20 states. He was also one of the most sought after purebred livestock judges having served that role in most every state. Boyd was instrumental in founding the North American International Livestock Exposition and served on the beef advisory board and steering committee. Boyd died in 2015.

Brady J. Deaton, of Columbia, Missouri, is chancellor emeritus at the University of Missouri, where he was chancellor from 2004-2013 and held numerous other positions, such as provost, chief of staff and chairman of the agricultural economics department. He is director of the Deaton Institute for University Leadership in International Development at Missouri. Deaton served as chairman of the Academic Affairs Council of the Association of Public and Land-grant Universities and participates in advisory roles with the U.S. Department of Agriculture. He was appointed chairman of the Board for International Food and Agricultural Development by President Barack Obama in 2011 and reappointed in 2012 for a four-year term. He holds a bachelor’s degree in agricultural economics from UK, as well as a master’s degree from UK's Patterson School of Diplomacy and International Commerce. Deaton received master's and doctoral degrees in agricultural economics from the University of Wisconsin.

Harold Love began his career as an assistant county agent in Mercer County working with 4-H and horticulture programs and finished it as an extension professor specializing in agribusiness marketing and management. Much of Love’s work centered about conducting comprehensive management audits that provided in-depth education and advice to help agribusiness managers increase efficiency and profitability. His work in this area led first to improving management techniques on a state level and then on a national scale. Approaches in management education and training in many parts of the United States still employ the techniques, approaches and materials from Love’s seminal work. He did consultancy work in the United States, Indonesia, India, Thailand, China and Honduras and with many other state, national and international agencies and organizations. Love, of Lexington, received his undergraduate and graduate degrees from the UK College of Agriculture, Food and Environment and his doctoral degree from the University of Missouri.

Rupert G. Seals, of Reno, Nevada, has had an esteemed career in higher education, rising through the ranks from instructor to professor and dean. He has given much to agriculture through exemplary academic leadership, and for his advocacy and action in creating a national awareness of the vital need for increased economic support and opportunities for African Americans at land-grant universities. Seals, a Fayette County native, received his undergraduate degree in dairy science in 1953 from Florida A & M University. In 1956, he became the first African American to receive a master’s degree from the UK College of Agriculture, Food and Environment. In 1960, he became only the fifth African American to earn a doctoral degree from Washington State University in animal sciences. He was professor and dean of the School of Agriculture and Home Economics at Florida A & M, professor of animal nutrition and associate dean of the College of Agriculture at the University of Nevada and director of international programs at Florida A & M. He is the recipient of numerous honors including induction into the George Washington Carver Public Service Hall of Fame at Tuskegee University.

The Hall of Distinguished Alumni awards are presented annually and are a joint program of the UK College of Agriculture, Food and Environment and the UK Ag and HES Alumni Association. It the highest alumni award bestowed by the college.