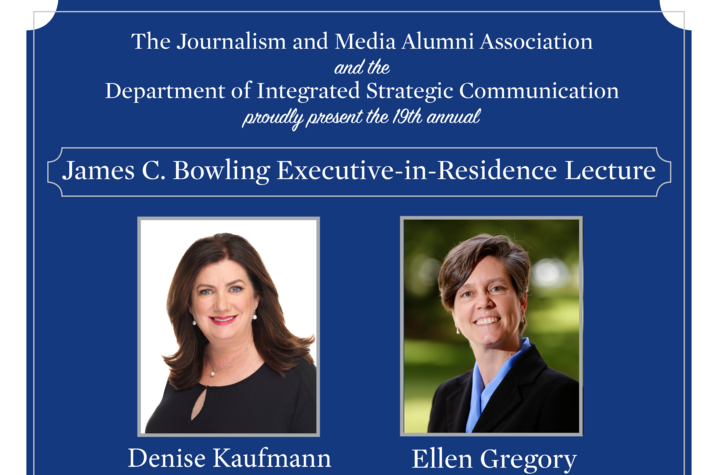 The James C. Bowling Lecture will be delivered by Denise Kaufmann.

LEXINGTON, KY. (Nov. 7, 2018) — Denise Kaufmann, director of client development at North America for Ketchum, will be presenting the 2018 James C. Bowling Executive-in-Residence Lecture at 6 p.m. Thursday, Nov. 8, at the University of Kentucky Kincaid Auditorium in  the Gatton College Building.

Kaufmann’s public presentation is titled, “Storytelling: How Brands Express Themselves.”

Before the presentation, Kaufmann will meet with members of the Public Relations Student Society of America (PRSSA) in the Fireside Room of the Boone Center.

The Bowling Lecture Series, now in its 19th year, is sponsored by the Department of Integrated Strategic Communication in the UK College of Communication and Information and the Journalism and Media Alumni Association at UK.

Kaufmann, after receiving a bachelor's degree in journalism from Kent State University, began her career at Ketchum in 1997 as the vice president in Ketchum Chicago’s Brand Marketing group. From 2001-04, she was relocated to Hong Kong as the director of client services for greater China and in 2004 she joined the New York team as the global client director for FedEx.

After Kaufmann’s time with the New York team, she was promoted in 2010 to become the managing director, client service and global account director for Philips Lighting and FedEx and relocated to London, England. She then became the CEO of the London office in 2013.

As the vice president of Ketchum Chicago’s Brand Marketing group, Kaufmann managed the global integrated marketing and public relation programs for Lions Club International. While serving as the global account director, she managed activities in more than 18 countries and coordinated outreach efforts for the organization’s $300 million foundation, working with corporations, NGOs and other international health agencies around the globe.

As of January 2018, Kaufmann was named the partner and director of Ketchum North America and relocated back to Chicago, where her career at Ketchum began.

During her nearly 10 years with the university, Gregory has been responsible for coordinating all the marketing and public relations efforts associated with the rebranding of the institution, the institutional name change, as well as the identity transition of a women’s college to a fully co-educational institution in 2016.

Prior to Midway University, Gregory spent 12 years at Preston-Osborne, a prominent public relations, marketing and research firm in Lexington, serving as a marketing consultant and the last nine years as chief operating officer.

While at Preston-Osborne, Gregory was honored twice with the Public Relations Society of America’s Silver Anvil Award, considered the Pulitzer Prize in public relations, one for her work with the PRIDE Environmental Program and the other for the Kentucky Equine Education Project (KEEP) work to establish the Breeder’s Incentive Fund.

Gregory is a graduate of the University of Kentucky, with a bachelor's degree in political science and a master's degree in public administration from the university’s Martin School of Public Administration. She and her husband, Eric, live in Midway with their three children, Ginny, Duncan and Sarah. The family spends most of their time restoring old Victorian homes and are currently in the process of restoring her paternal grandmother’s home in her hometown of Edmonton, Kentucky — the historic Bell House — to save it for future generations of the family to enjoy.

The Bowling Lecture Series honors Bowling’s legacy and was founded through a generous donation from retired chairman of the board at Philip Morris, Joseph M. Cullman III. Bowling was a longtime executive with Philip Morris and served on the company’s board of directors from 1969 to 1986.