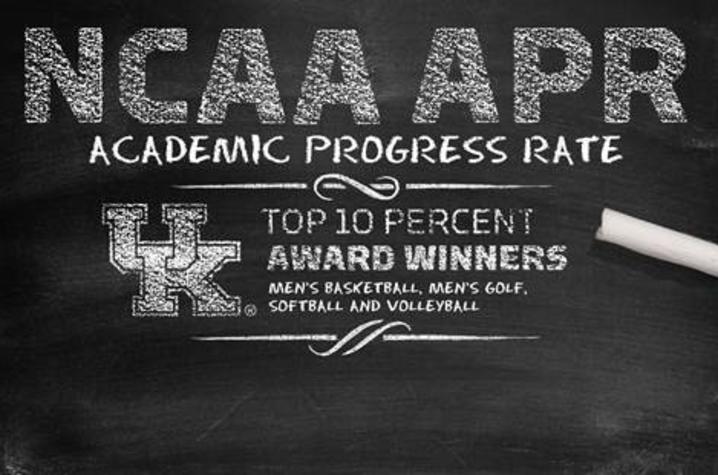 The Wildcat squads received the honor for placing in the top 10 percent of Division I schools in their respective sports. The APR provides a real-time look at a team's academic success by the progress of each student-athlete on scholarship. The APR measures academic eligibility, retention and graduation. The scores are a four-year composite, covering the 2012-13 through the 2015-16 school years.

Having four teams earn the APR top-10 award ties the school record set last year. It’s also the first time that a UK squad has won in six consecutive years, as this marks six in a row for men’s golf. Men’s basketball earned the honor for the third consecutive year and fourth time overall. Softball and volleyball are first-time winners.

“I’m proud of how all our teams have achieved their APR scores over the years,” said Mitch Barnhart, UK director of athletics. “Earning a top-10 award is a difficult and significant achievement. It is a credit to the students for their diligence, to the academic support staff for their guidance, and to Coach (John) Calipari, Coach (Brian) Craig, Coach (Rachel) Lawson and Coach (Craig) Skinner for their success in managing their programs.”

The Wildcat coaches were excited about their teams’ achievements.

This latest news is a continuation of the academic accomplishments of UK student-athletes. In November, it was announced that UK has broken or tied the NCAA Graduation Success Rate every year since the NCAA began measuring that statistic in 2005. UK athletes have posted an overall grade-point average over 3.0 in each of the last nine semesters. Including the 2016 December Commencement and this week’s graduation ceremonies, 104 Wildcat student-athletes will earn their bachelor’s degrees during the 2016-17 school year.