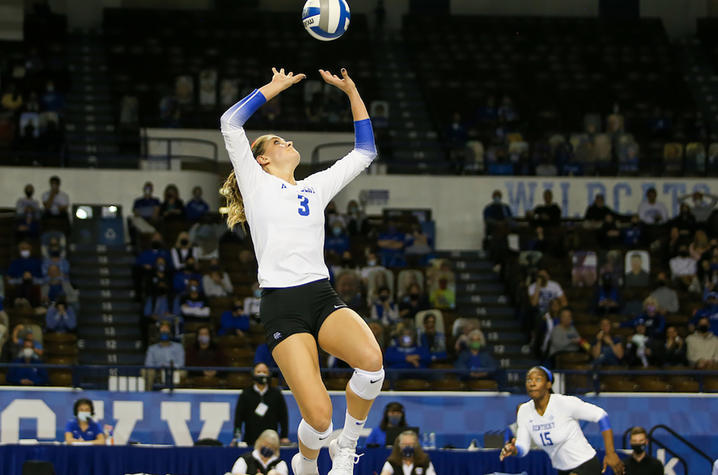 Madison Lilley is the first-ever volleyball player to win the award in the history of the SEC. Photo courtesy of UK Athletics.

LEXINGTON, Ky. (July 8, 2021) — Kentucky Volleyball setter Madison Lilley was named the 2020-21 Roy F. Kramer Southeastern Conference Female Athlete of the Year, the conference office announced Wednesday morning. She is the first-ever volleyball player to win the award in the history of the SEC.

Alabama wide receiver DeVonta Smith, who won the Heisman Trophy at Alabama, was named the male winner of the award for 2020-21.

"We are proud to honor DeVonta and Madison, who not only excelled in the SEC but were also recognized as the best in their sport across the country. They are the ultimate examples of what it means to be a student-athlete in the Southeastern Conference,” said SEC Commissioner Greg Sankey. “DeVonta and Madison both were members of national championship teams and recipients of their sport’s national player of the year award. Each has competed at the highest level of collegiate athletics, benefited from the world-class support provided by their universities and, through their hard work, dedication and commitment to excellence, have reached the pinnacle of collegiate athletic success. Congratulations to DeVonta and Madison and thank you for being part of the SEC!”

Past winners of this award from the SEC are Peyton Manning, Joe Burrow, Candace Parker, Tim Tebow, Bo Jackson and Bridget Sloan.

Lilley was named the conference’s Player of the Year this season, in addition to winning AVCA National Player of the Year honors and capturing the 2020-21 Honda Award for volleyball. She was one of the key pieces to Kentucky’s first-ever NCAA national championship win over Texas, logging 53 assists and a career-high 19 digs in the title match.

“Given the number of incredible athletes in our league, to be elected SEC Female Athlete of the Year is an elite honor,” said Mitch Barnhart, UK Director of Athletics. “What made Madison so special is that she is worthy of being chosen from both an individual and a team perspective.  Individually, her record-setting performance on the court speaks for itself. In addition, the way she led her team – with unyielding commitment to make her teammates their very best and her indomitable will to win – makes her deserving of this distinction.”

Lilley is one of four finalists for the 2021 ESPY Award in the category of Female College Athlete of the Year. The winners will be announced during the ESPYS, scheduled to take place July 10 at 8 p.m. ET on ABC.

“I’m proud of what Madison has achieved as an athlete. It’s truly incredible what she’s accomplished,” UK head coach Craig Skinner said. “What I’m even more proud of is her vision that she set forth for herself and the team. She set out a path to win a national championship and she followed through with it like the champion she is.”

Exceptional in the classroom, as well, Lilley graduated from Kentucky in the spring with a degree in integrated strategic communications and was named CoSIDA Academic All-District this season for the first time in her career. She is on the ballot for Academic All-America, currently in the voting process.