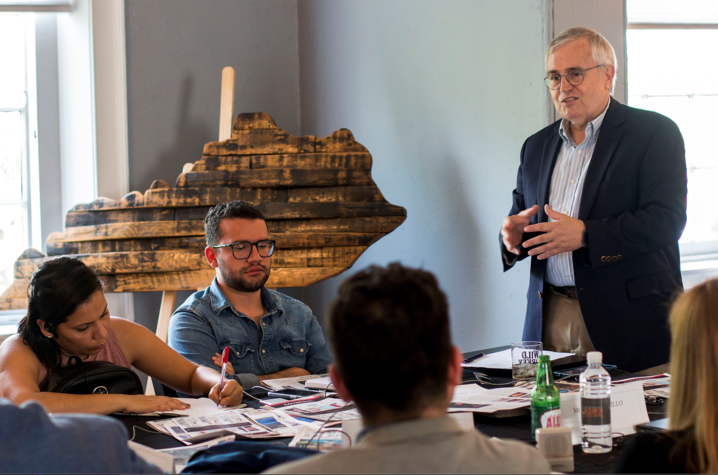 Al Cross speaking to a group of Latin American journalists visiting Bardstown in 2019. Photo by Forrest Berkshire, The Kentucky Standard.

LEXINGTON, Ky. (July 1, 2021) — With a half a century of journalism experience under his belt, veteran political reporter turned professor Al Cross has dedicated his life to reporting on and serving his community. Since 2004, much of that service has been through the University of Kentucky College of Communication and Information’s Institute for Rural Journalism and Community Issues (IRJCI).

Cross, a full professor, also is the director of the IRJCI, housed in the School of Journalism and Media. The institute helps rural journalists, primarily in Appalachia but also nationwide, define the public agenda in their communities by localizing broader issues. The IRJCI also interprets rural issues for metropolitan journalists.

“I can’t overstate the value of the IRJCI and the impact it has on rural newspapers and rural journalists,” said Kentucky Press Association President Sharon Burton. Burton, of Columbia, Kentucky, is the publisher of the Adair County Community Voice and The Farmer’s Pride, a statewide agricultural newspaper.

“I’ve attended seminars; I’ve picked up the phone because I needed sound advice from a trusted friend; I’ve learned of news topics of interest to my community — all through the Institute for Rural Journalism and Community Issues. When rural journalists are invited to the table, it reminds us that what we do is just as important as providing national or state news coverage,” Burton said.

The institute was co-founded in 2004 by Cross and his longtime friend and mentor, the late Al Smith. Smith, chair emeritus of the institute’s advisory board, was also owner of a small chain of rural weeklies, founding producer of Kentucky Educational Television's "Comment on Kentucky" and co-chair of the federal Appalachian Regional Commission in the Carter and Reagan administrations.

In 2006, Smith and institute advisory board member Lois Mateus created the UK Institute for Rural Journalism and Community Issues Endowed Fund for Excellence, to ensure the continuation of the institute even after Cross’ retirement. The fund provides support for rural journalism research, the Tall Grass Farm Foundation Graduate Fellowship, a Professorship in Rural Journalism and Community Issues, and conferences, workshops and meetings.

The IRJCI produces three publications serving audiences as targeted as Midway, Kentucky, and as broad as the nation. These publications are The Rural Blog, Kentucky Health News and The Midway Messenger.

"These publications have been as active and crucial this year as any time in the institute’s history, with the rise of political and racial tensions and the COVID-19 pandemic," Cross said.

In 2004, just two weeks into his career shift from lifelong reporter to college professor, Cross started The Rural Blog. Hampered by socioeconomic conditions and population decline, local newspapers in Central Appalachia had been weakened. Cross saw the need for reliable journalism that provided leadership on local issues. Shortly after its inception, Cross broadened the reach of The Rural Blog to rural journalists across the nation, who were feeling the same pressures as those in Eastern Kentucky.

In recent years, the decline has accelerated as advertisers have shifted their dollars to targeted digital platforms.

“For the first time, we are seeing multiple Kentucky counties lose their local newspaper, or see them consolidated across county lines,” Cross said.

Cross highlighted just how important Kentucky newspapers are by compiling their reports on the coronavirus in a special project for the Kentucky Press Association. The report was cited nationally and republished in newspapers across the state to highlight the essential public service local newspapers provide, despite the tough obstacles they continue to face.

“In perhaps the most challenging year for newspapers in their history, the community papers of Kentucky came through for Kentuckians,” Cross wrote in the report.

Over the years, The Rural Blog has declared itself as “a digest of events, trends, issues, ideas and journalism from and about rural America.” As the political turmoil of the 2020 election spread, the blog did not shy away from the subject. Cross ensures that the blog takes no political position but also pulls no punches. Being a longtime political reporter himself, Cross understood the importance of accurate information in a sea of political misinformation and disinformation.

“We have to stand up for the truth even if millions of people believe otherwise,” Cross said.

Heather Chapman, chief author of The Rural Blog, said the 19% of Americans living in rural America have a disproportionate effect on national politics, because of the way U.S. senators are elected. The blog aims to help keep those residents informed about the rest of the nation while also informing the nation about rural areas, reporting on policy that affects rural communities.

The institute’s second publication, Kentucky Health News, has been an invaluable source of information to the entire state throughout the COVID-19 pandemic. This publication focuses on health issues in a state that is one of the nation’s least healthy.

Cross said his research showed that health was neglected in local news coverage and he felt a “personal obligation” to change that. With funding from the Foundation for a Healthy Kentucky, Cross began publishing Kentucky Health News in 2011. Though it first focused on personal health, Kentucky Health News evolved into covering public policy with Kentucky’s expansion of Medicaid and other aspects of the Patient Protection and Affordable Care Act, while still covering personal health topics.

From March 7, 2020, to April 4, 2021, Kentucky Health News posted a coronavirus-related article every day. Many articles elaborated on Gov. Andy Beshear’s daily briefings, but other articles broke down health numbers for public knowledge. For example, when Gov. Beshear and Health Commissioner Steven Stack wouldn’t say how they used data to guide their decisions, KHN published a story that showed data models they were probably using.

“What we’re doing here is helping a state with poor health status improve that status, and to deal with the public policy questions that surround health, and now to deal with a pandemic,” Cross said. “It’s become almost a full-time job being editor and publisher of Kentucky Health News in a pandemic.”

“My mission every day is to improve the health of Kentuckians through the written word, through shared information,” Patrick said.

While The Rural Blog and Kentucky Health News have provided political and pandemic coverage to an audience numbering millions, the IRJCI’s third publication focuses on a single zip code.

Started in 2008, The Midway Messenger was originally an experiment Cross devised to help students get real-world experience, to give Midway a local news outlet again and to encourage rural newspapers to embrace digital platforms. Cross said good students in his community journalism course and a newsworthy town have made the Messenger blog and its twice-yearly print edition successful.

“It’s hard to overstate the importance of The Midway Messenger to our community,” said Midway Mayor Grayson Vandegrift. “While we get good coverage from The Woodford Sun, The Midway Messenger has become our paper of record. I can tell anecdotally that more people in Midway are getting their local news from the Messenger than from the Sun.”

Having led the IRJCI from its inception, Cross has ensured a solid foundation for the benefit of rural communities across the nation and for a healthier Kentucky. Although he does plan to reduce his numerous responsibilities in his phased retirement starting in the 2021-2022 academic year, his effect on rural journalism through the IRJCI will be his legacy.

“Our overall aim is to help life in rural America and rural Kentucky,” Cross said, “and we operate under the proposition that rural Americans deserve good journalism as much as anybody else in America.”