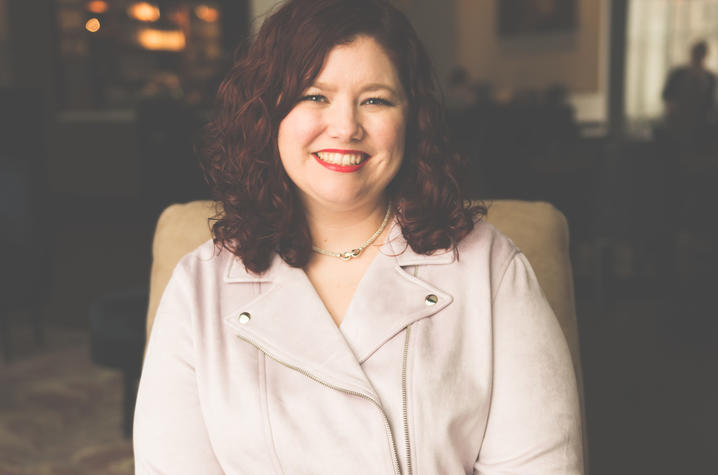 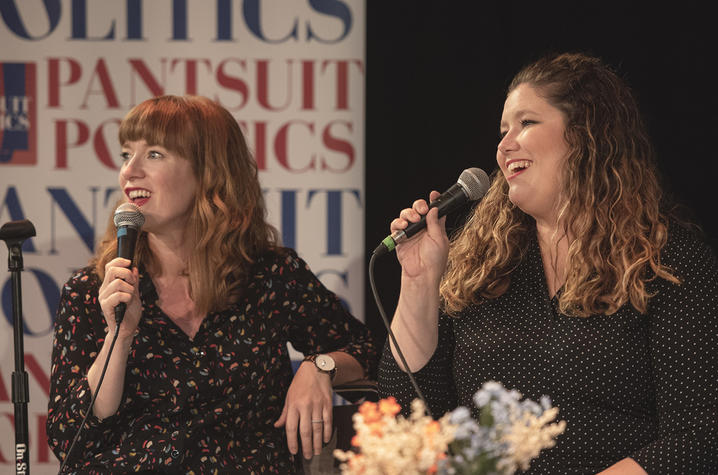 And the topic is bound to arise across the dinner table this holiday season, but how can you approach it calmly and respectfully while finding common ground? Author, businesswoman, former lawyer, podcast co-host and University of Kentucky alumna Beth Silvers has a guide for it all.

Silvers is one half of the dynamic duo behind “Pantsuit Politics,” a podcast that guides listeners on how to tackle conversations encompassing politics, democracy and the news while treating others with grace and respect.

Alongside her co-host Sarah Stewart Holland, Silvers also co-hosts the podcast “The Nuanced Life,” and co-authored the book “I Think You're Wrong (But I'm Listening).”

Silvers is also the coach and mentor behind “Checking in with Beth Silvers,” a life and business coaching practice. She is a 2006 graduate of the J. David Rosenberg College of Law at the University of Kentucky, where she served as symposium editor for the law review.

UKNow sat down with Silvers to learn about the “Pantsuit Politics” approach to talking about politics, and how we all can better understand those across the aisle (or table).

UKNow: Can you tell us a little bit about what inspired you and your co-host, Sarah Stewart Holland, to create and name your podcast “Pantsuit Politics”?

Silvers: Sarah had the idea for a podcast called “Pantsuit Politics” before we connected. She was inspired to highlight women in politics and also loves alliteration. We started discussing political issues on Sarah’s blog and realized that we had an interesting dynamic and complimentary personalities and perspectives. We knew that we didn’t always agree. We also knew that we shared many common values.

The idea behind the podcast was simply to create what we wanted to consume but couldn’t find — political conversation that works hard to avoid hyperbole, that makes room for different perspectives, that acknowledges what is hard or unknown or unknowable, and that recognizes that politics is one form of life but not its totality.

UKNow: One of the facets of your podcast and platform emphasizes actively listening to someone in order to establish common ground. Do you have advice to offer for anyone looking to find common ground with their friends or family?

We don’t have to emerge from a discussion with draft legislation or a candidate endorsement. We just want to learn something, and then move on from politics and come back to it again. It’s the long process of connecting over time that allows us to actually influence each other.

UKNow: The first episode of your podcast was released in 2015. Has the way you talk about or approach political conversations changed since then?

Silvers: When we started the podcast, we came from different sides of the political aisle — Sarah was a Democrat, and I was a Republican. In 2019, I changed my registration because of what I see as the Republican Party’s embrace of Trumpism and abandonment of the reasons that I was a Republican. Sarah and I maintain some philosophical differences about the role of government, and our styles and personalities are still very different. But we’ve really had to talk about more fundamental issues over the past few years than we intended when we started, and on those fundamental issues, we’re aligned.

UKNow: Do you think your law school background and training has helped you to better tackle political conversations?

Silvers: My legal education has enabled me to speak the language of our government and bring a grounded perspective to political discussions. I’m often able to deescalate a conversation by talking about how our judicial system or the legislative process works. I also know that my training helps me better hear out perspectives that challenge my own.

I’m grateful that I learned how to make arguments from different angles, to discern the difference between arguments that are more about process than outcome and vice versa, and to think critically about who is responsible for playing which roles in our government.

UKNow: This year’s election has dominated the news cycle, and often been a polarizing and stressful topic of debate and conversation. Do you have any advice for college students going home for the holidays, and how they can approach the inevitable conversation?

Silvers: It’s easy to enter a cycle of regurgitating talking points from pundits and politicians. It’s really important to step back from that. I’m always thinking about how to ask a more interesting question. Instead of throwing talking points back and forth about immigration, for example, ask, “what do we think should be the law about who gets to live and work and vote in America? If we needed to move to another country, what standards should be used to assess whether we are admitted abroad?”

It’s also helpful to talk about ideas instead of people. I’ve never had a conversation about President Trump that brought out anyone’s best. We’re often too personally invested in our allegiance or opposition to individual politicians to have fruitful discussions. I find I can learn more when I ask about policies or what people are worried about or what makes people excited about the future.

UKNow: How important is it to you to bring a female-centered perspective on politics?

Silvers: Our male listeners have convinced me that it’s more important than I might have thought. We frequently hear from men that it is unique and important to them to hear conversations among two women without any male influence (we do have two men on our team in sound production roles, but Sarah and I, along with our managing director, Alise Napp, make all of our editorial and production decisions).

UKNow: Why do you think the "Pantsuit Politics" perspective and approach to politics is more important than ever?

Silvers: It’s a tenuous moment in America. I’m glad that more people are turning their attention to politics. I think we have taken our citizen-government for granted for too long. Our approach, I hope, is one that allows people of different perspectives to take in solidly researched information and transparent opinions. Our audience is probably majority center-left, but I’m proud of the fact we have self-described communists, libertarians, Trump supporters, climate activists, and a host of other perspectives represented among our listeners.

With deep cultural divides, systemic racism, and enormous challenges on the global stage, I know it’s not as simple as “let’s bring everyone together.” I do hope that we can at least be a small part of bringing Americans around to some common facts and core values.

UKNow: How important do you think it is to be reaching across the metaphorical aisle to our friends and family this holiday season, when it’s been such a rollercoaster year politically?

Silvers: Honestly, I think we might all need some space for a few weeks. It has been a rollercoaster, and we’re still riding it at a time when we are carrying a year’s worth of ambient stress from the pandemic, the economic downturn, and an ongoing racial reckoning. We might not be ready to reach across the metaphorical aisle yet.

We might not even be able to agree with family and friends about appropriate holiday gatherings and celebrations in light of COVID-19.

For the next six weeks, I think those of us who are not government officials might do well to focus on the very big picture: what do we love about the people in our lives? What do we want our relationships to look like? When we’re ready to talk politics again, who do we want to be in those conversations?