"I could change the lives of so many people and give the gift that I so deeply cherish — a second chance.”

LEXINGTON, Ky. (May 4, 2020) — At what age did you know what you wanted to do for a living? As children, we have the notion that we can be and do anything.

For some, those aspirations fade and more realistic ones emerge. Others spend their entire lives searching for a purpose — not Cam Asher.

“I wanted to be a catalyst for change, not only in Kentucky, but in the world.”

Growing up in Clay County, Asher’s dreams stretched far beyond the foothills of the Cumberland Mountains. He often felt helpless as those in his small-town community struggled by the way of drugs and poverty.

“My passion is to change the world of health care,” Asher said. “I want to make sure I meet that unmet need and change the area I grew up in.”

With that noble goal front of mind, Asher searched for a place to continue his education — an institution that would foster success. He was aware of the University of Kentucky and its mission to be the university for Kentucky.

“You hear about the influence UK has in our state and all of the lives it has changed. I knew that an education here was the key to opening doors.”

During his senior year of high school, Asher attended a preview night in the nearby city of Corbin. He eagerly accepted packets of information and chatted with administrators about available resources.

But Asher’s aspirations were solidified when he came to Lexington for a campus visit. “I absolutely fell in love with UK in every aspect. The friendly community, all the facilities and everything else just made this place the school of my dreams, truly.”

Feelings of anticipation and apprehension were intertwined as Asher made a life-changing decision — to become a Wildcat. “At the time, I was a little nervous about college, but I was really focused. I was hoping to be a pediatrician,” he said. “Being a UK student to me meant living out every dream that I ever had.”

Turning a dream into reality can take years of preparation. Asher put in the work — earning the grades, graduating from high school and receiving scholarships to attend UK. But the path he so carefully paved took an unexpected turn on February 25, 2016.

“I was in a car accident in Laurel County, Kentucky. And I had a traumatic brain injury — that was very severe.”

In medical terms, Asher suffered a subdural hematoma. As a result, the bleeding and increased pressure on the brain can be life-threatening. To operate, doctors had to remove a portion of Asher’s skull.

“I thought my life was over.”

Asher survived, but had a long and challenging road ahead.

School took a backseat as he was forced to relearn even the most basic tasks — how to talk and walk. “Ultimately, UK reached out to me. They really pushed me that they believed in me, and they hoped that I would recover soon. And that really meant a lot to me.”

UK offered to hold Asher’s scholarships, but there was no need.

“I said, I'm going to come to UK on time. And I'm going to graduate on time,” he said. “I think that a valuable lesson I've learned in life is that you should always be willing to take risks.”

Asher turned his bold statement into a bold reality — starting his freshman year on time in the fall of 2016.

“I had to study probably every hour of the day most days, and I didn't have a very well-balanced life,” he continued. “But as I kept working and pushing myself, I noticed that with time my academics really showed that.”

Throughout his time as a student in the Gatton College of Business and Economics, Asher held on to that confidence and persistence — hoping that his education would one day allow him to open a state-of-the-art health care facility in Eastern Kentucky.

“I want to be an entrepreneur and not only shape the economy in Eastern Kentucky but change patient outcomes.”

As a former patient himself, Asher knows how it feels to be offered a new outlook on life.

“At the end of the day, I don't want to waste that second chance that I've gotten in life. It would ultimately be selfish of me,” he said. “And I think that I'm so fortunate to be at the University of Kentucky and surrounded by so many wonderful and passionate people.”

Though proud of his accomplishments, Asher is also humble enough to admit — he didn’t achieve academic success on his own. He credits faculty in Gatton College, staff at the Disability Resource Center and mentors — like Don Witt, assistant vice president of UK Philanthropy — for encouraging him to push boundaries and pursue excellence.

“He's a genuine human being who does nothing but give to others. And I want to reflect that in my own life. I want to be the kind of person who puts others' needs first, because I think that's the definition of leadership.”

Four years have come and gone, and Asher has held true to his promise to graduate on time.

With a degree in business management in tow, Asher intends to lead this next phase of his life with grace and grit. While pursuing a master’s degree in health care administration, he hopes to serve as proof that you can’t allow circumstance to define your success.

“When I want to give up, I think about how selfish it would be and how ultimately if things go as I plan, I could change the lives of so many people and give the gift that I so deeply cherish — a second chance.”

We are resharing this story as part of our Wildcat Wednesday Series: 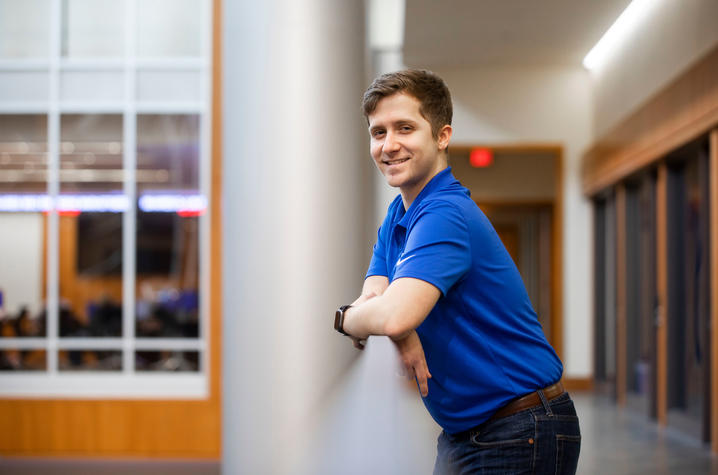 Four years have come and gone, and Cam Asher has held true his promise to graduate on time. Pete Comparoni | UK Photo.