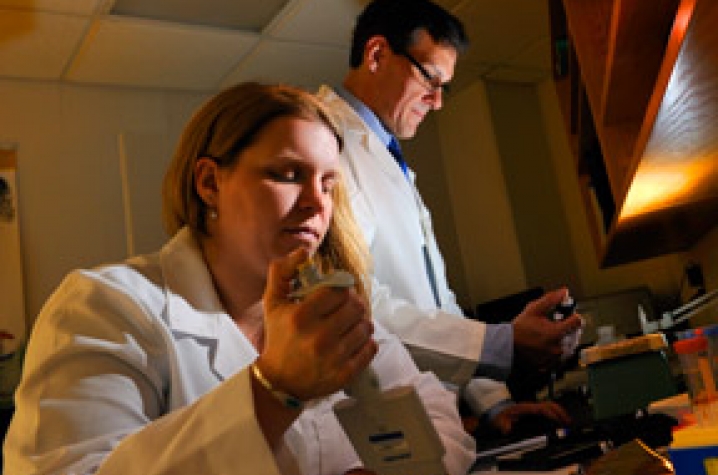 LEXINGTON, Ky. (Sept. 21, 2011) — CoPlex Therapeutics has signed an exclusive global license agreement with Hawthorn Pharmaceuticals to develop and commercialize hawAD14, a preclinical oral small molecule candidate for the treatment of Alzheimer’s and other neurodegenerative diseases.

According to a released statement from Hawthorn Pharmaceuticals, a commercial-stage specialty drug company, research indicates hawAD14 significantly decreases production of amyloid beta (Aβ) the major component of senile plaques and alters proteins associated with hyperphosphorylation of tau which is associated with neurofibrillary tangles present in Alzheimer's disease.

“In terms of the discovery’s uniqueness, it’s one of only a few programs in the world demonstrating multiple protective effects against the predominant pathogenic pathways of Alzheimer’s disease,” said Rob Lewis, chief scientific officer at Hawthorn. “We are in the process of completing necessary preclinical studies in order to file an IND (investigational new drug) with the FDA,” said Hawthorn CEO Max Draughn.

CoPlex co-founder and CEO John Beran said, “University of Kentucky researchers and CoPlex founding scientists Mark Lovell and Bert Lynn discovered an aberrant protein complex linked to Alzheimer’s which gave them a unique approach to begin to interrupt pathogenic mechanisms associated with the disease. They evaluated multiple compounds to see if they could minimize events on the path toward Alzheimer’s and the leading candidate was hawAD14.”

“The discovery of hawAD14 may be the most promising research of our professional careers,” said Mark Lovell, Jack & Linda Gill Professor of Chemistry and research faculty with the UK Sanders-Brown Center on Aging. “We are extremely excited by the potential this compound holds to slow the progression of Alzheimer’s and significantly improve the lives of individuals impacted by this terrible disease.” Lovell worked as a graduate student and postdoctoral scholar under the direction of Dr. William D. Ehmann and the late Sanders-Brown founder Dr. William R. Markesbery.

UK chemistry colleague and CoPlex co-founder Bert Lynn said, “While developing haw AD14, we have gained insight into possible biochemical pathways leading to neurodegeneration and are using this information to identify additional active compounds for other neurodegenerative diseases.” In addition to being a professor in the Department of Chemistry, Lynn is also a Sanders-Brown Center on Aging faculty associate and director of the UK Mass Spectrometry Facility in the ASTeCC campus incubator.

Lovell and Lynn have partnered with Beran on another University of Kentucky spinoff company Scout Diagnostics. The Scout technology measures levels of a novel protein biomarker — the same aberrant protein complex discovered and used to develop hawAD14 and other compounds through CoPlex.

According to Beran, the current Scout prototype test detects this biomarker which is tied to the progression of Alzheimer’s from its earliest manifestation as mild cognitive impairment. “This is a point early enough in the progression of the disease that next-generation therapeutics may offer the prospect of slowing further cognitive decline.”

“Imagine going for a check up, having blood drawn and being placed on a safe therapeutic drug that will slow the progress of Alzheimer’s so that you never experience its symptoms. This is our hope for both technologies,” said Beran, who was introduced to Lovell and Lynn by their chemistry department colleague John Anthony in 2006. Anthony and Beran are co-founders of Outrider Technologies.

“The CoPlex technology is moving so fast that it is hard to predict the limits on its application,” said Beran, who plans to work with Hawthorn Pharmaceuticals to develop additional drug candidates for other neurologic disorders. “We believe what Mark and Bert have uncovered will lead to better treatments for these vexing diseases.”

The Scout Diagnostics’ technology can be applied in different situations where it is important to know whether a patient is beginning to develop Alzheimer’s such as in clinical trials. “It is perfectly suited for a first-in-category blood test for Alzheimer’s which would be considered an in vitro diagnostic medical device,” said Beran. He is working with several companies that are interested in developing this technology.

Beran has also worked closely with the University of Kentucky Office for Commercialization & Economic Development, and both CoPlex Therapeutics and Scout Diagnostics are located in the ASTeCC campus incubator, managed by the UKCED office. “Between lab space, relationships with investors and networking gatherings, I’ve been able to champion my spinoff companies and their technologies forward,” said Beran. “Len Heller has a great mind for business and is a mentor to me.”

“We are all very pleased that CoPlex Therapeutics and Scout Diagnostics are moving closer to making significant contributions to the early detection and treatment of Alzheimer’s disease,” said Beran.