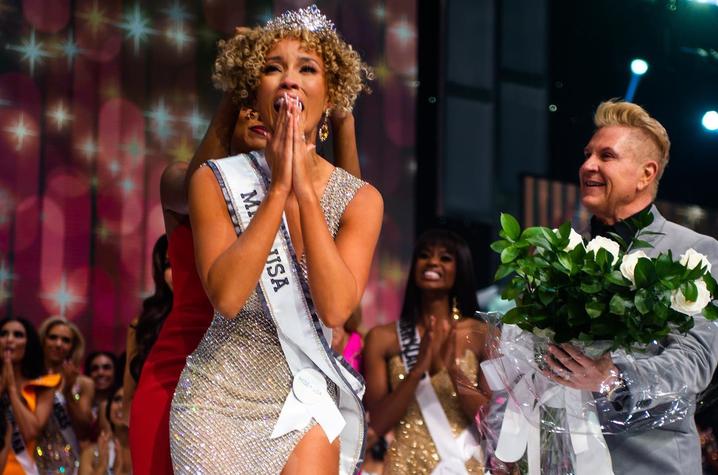 Elle Smith is going from Miss Kentucky to Miss USA. Photo by @felipeespinal.

LEXINGTON, Ky. (Dec. 1, 2021) — With beauty, brains and the Big Blue Nation supporting her, a University of Kentucky College of Communication and Information (CI) alumna has traded her Miss Kentucky title for Miss USA. Elle Smith has won the 2021 Miss USA pageant. The UK graduate will now represent the United States in the Miss Universe pageant on Dec. 12, in Eilat, Israel.

Smith, a 2020 journalism graduate, won the title of Miss Kentucky USA in May 2021. While her performance may have had some people believing she was a pageant veteran, this was her first time competing in a pageant. And the road that led her to the pageant life started at UK.

WHAS-TV, an ABC-affiliated station, is a Top 50 market, so Smith came into the job a bit intimidated. As a southern Indiana multimedia journalist, she is responsible for finding, pitching, shooting and editing hard news stories every day. She has a list of about 100 contacts that she has spent extensive time building relationships with, on and off the clock. She said her job was the kind you took home and was constantly on your brain. But thanks to her first “big girl job,” she was finally able to afford competing in her first pageant.

As Miss Kentucky USA, Smith was set to represent the state for the next year in addition to working her full-time job as a reporter. She has made appearances at ball games and other pageants across different states while also appearing on camera to cover news stories for work.

The juggling act that her responsibilities require only intensified with the preparations Smith made for the Miss USA pageant. She spent two weeks in Tulsa competing against 50 women on a grueling 4 a.m. to midnight schedule. Ahead of that competition, Smith designed her own gown, state costume and self-branding on top of physically and mentally preparing herself. She will now give her Miss Kentucky USA title to the Kentucky runner-up and move to Los Angeles on a full salary to represent the nation for a year.