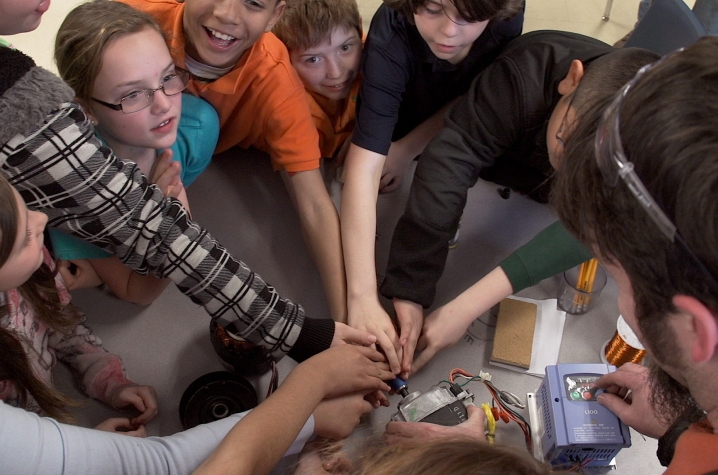 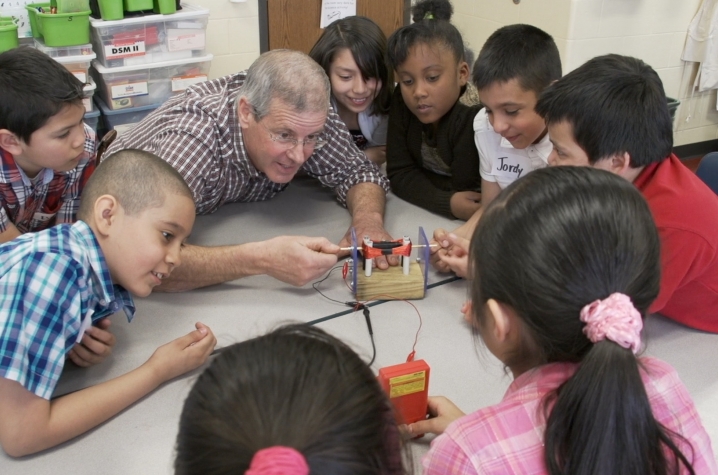 LEXINGTON, Ky. (June 4, 2014) — Scientists at the University of Kentucky are making an investment in the future of energy research by going back to school — elementary school.

A partnership between the UK Center for Applied Energy Research (CAER) and three Lexington elementary schools aims to kick-start interest in scientific learning at a young age, by putting working scientists into classrooms to lead fourth-graders in hands-on demonstrations and experiments.

The "CAER 101" education program, which began with Russell Cave Elementary School 12 years ago, was expanded this year to include Liberty and Yates as well. CAER scientists presented the same, one-hour lesson to each of the three schools. Their goal was to complement and reinforce “disciplinary core ideas,” part of the new science standards.

The core idea in this instance was "What is energy?" Anne Oberlink, CAER associate research scientist, focused on the many different forms that energy can take.

"We were demonstrating sound energy, light energy and electrical energy," Oberlink said. "We had a coffee can that we put a piece of paper on, so we would tap our fingers on that. Or we had a tuning fork that we would hit and put under water, up to our ear."

"You might have seen the desktop toys that have the balls that clink back and forth, but mine is a little bit bigger," Pace said. "The energy is always getting transferred around; it doesn’t just disappear. It certainly allows me to really teach the principles that I’m trying to get across in a very visual and hands-on kind of way."

"We just basically had a pole with a magnet in the middle and copper wire outside," Placido said. "You flip the magnet in the middle really fast, and you could actually show them on a multimeter that electricity was produced. We took a hand crank and hooked it onto a hobby generator, and we used that to power fans and lights and buzzers."

But that wasn't the only energy being generated in the classroom. Placido says the children's enthusiasm for learning was contagious.

"Once they got into it, they really had good questions — like they wanted to know 'Why does the number sometimes go negative?'" Placido said. "I would get pumped up every time, because you could tell the kids were interested. I am sure that’s what teachers really enjoy, when they see they’re getting through to the kids or the kids are interested in what you’re talking about."

Teachers and scientists alike say they hope that children who participate in the program will come away from the experience not just with a greater appreciation for the work that scientists do, but also a greater desire to "do science" themselves.

"A number of years, I’ve had kids draw what they think a scientist looks like," said Josh Radner, a science teacher at Yates Elementary. "And you’ll see a frizzy-haired white man in a lab coat. Today we had people of all colors. We had men and women, and people speaking with different accents. That’s really neat for (the students), because our kids are very diverse here, so they can see that scientists could look like them."

Liberty Elementary science teacher Kristi Fehr says she wishes she had received a similar introduction to science when she was in elementary school.

"I know when I was a senior in high school I was trying to decide what I wanted to be when I grew up," Fehr said. "If I had had more opportunities like this it might have been an easier decision."

Jack Groppo, a CAER principal research engineer who has been part of the project from the beginning, shares Fehr's sentiments.

"The reason I do it is because I wish somebody did it for me when I was in school," Groppo said. "That’s my primary motivation. Whenever you can take real engineers and scientists and bring them into a classroom and let children know that real people do these kind of things, right here in your own back yard, I think it makes science more real to them."

CAER 101 has three basic goals: to get scientists into classrooms, to provide experiments that teachers can easily duplicate, and to challenge other groups to do the same kind of outreach.

Groppo says the program is one that can be "pre-packaged" so that it may easily be copied by others.

"We'll give you the resources," he said. "Find a school in your neighborhood and just go do it. It doesn’t take that much time. It’s a phenomenal benefit — to the teachers and especially the students."