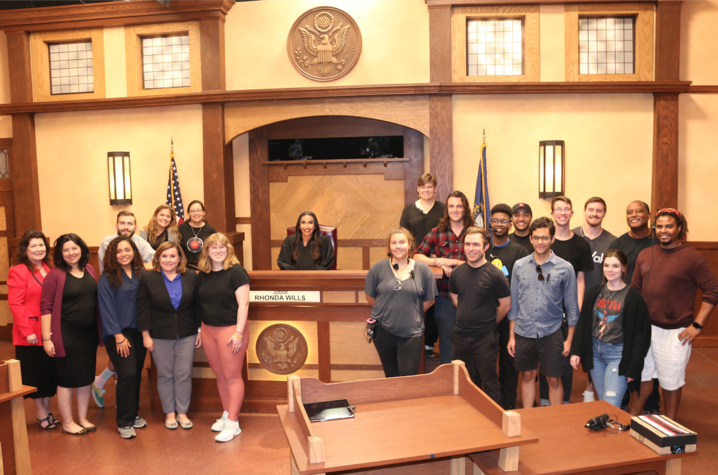 LEXINGTON, Ky. (Sept. 17, 2021) — Students who dream of making their mark in the entertainment industry used to think they’d need to head to Hollywood, New York or Atlanta. But 10 University of Kentucky College of Communication and Information (CI) students and alumni added their names this summer to the credits of a new, nationally televised reality show without ever leaving Lexington.

“Relative Justice,” which premiered earlier this week on Monday, Sept. 13, is the first nationally syndicated television show taped in Kentucky, and thanks to strong ties between the college and Lexington-based Wrigley Media Group (WMG), students and alumni were an integral part of the production crew.

“Working on a nationally syndicated show was amazing in and of itself, but to be able to be a part of something like that right here in Kentucky was even better,” said CI alumna Katie Sam Smith. “I’m so glad that I was able to be involved in something that not only kickstarted my career but also benefited my home state by providing employment opportunities and supporting local business.”

“Relative Justice” (check your local listings) is a family-based unscripted court show that “moves the drama from the family room to the courtroom.” With 150 episodes of more than 200 cases, viewers can expect a wide range of conflicts and emotions, all from real people with authentic disputes, presided over by Judge Rhonda Wills, a Houston attorney.

WMG is a full-service content creation company founded by Misdee Wrigley that works on everything from short-form web series to long-form network programming. The company recently converted the former Cinemark Woodhill Movies 10 into a full media production facility, and the “Relative Justice” taping took place there from May to August.

“The industry is changing to where you can make quality TV and films really anywhere in the world that you can then provide to the networks,” said Ross Babbit, chief content officer of WMG and executive producer of “Relative Justice.” “Misdee Wrigley decided to invest in this community because she believes, and I believe, we all believe, that Lexington is the next hot spot for television and film production.”

Producing the first season of “Relative Justice” saw a staff of half court show veterans and half Lexington locals. Along with other UK alumni, CI alumni and current students, many from the Media Arts and Studies (MAS) degree program, comprised a healthy portion of the Lexington crew:

Among the other students and alumni were several volunteers from the UK Department of Theatre and Dance, as well as two members of the crew — theatre graduates Lisa Cordonnier Hardin (1995) worked in property and Kim Dixon (1996) worked in makeup.

Although the CI alumni and students had no previous experience working on a courtroom show, their diligence and eagerness to learn impressed Lou Dennig, another executive producer of “Relative Justice.”

“UK students stack up against the ‘Emerson Mafia’ and Syracuse University people in Los Angeles 100%,” Dennig said, referring to his experience guest lecturing at the communication powerhouse universities. “I didn’t realize that UK had such a deep program also. And clearly, the training that students get at UK is world-class because the people came in, they stepped up and they did a great job.”

For many of the CI alumni and current students on the “Relative Justice” crew, the relevant training they received at UK came from Kyra Hunting, assistant professor in the School of Journalism and Media. Hunting had the opportunity to watch her students in action as an audience member. Denning took advantage of a break in taping to lead the entire crew in a round of applause for Hunting’s positive impact on the future of media.

“It was incredibly gratifying to be able to watch our talented and dedicated students in their element on set,” Hunting said. “The students who worked on this program were among our very best — creative, enthusiastic and professional — and it was so special to be able to see all the potential I observed in the classroom at work as they helped make a TV series that will be seen nationwide. Our students are as prepared and talented as students from anywhere in the country, and it was wonderful to see them having theki opportunity to prove that and start on their journeys in the industry.”

Real-world career track experiences are an integral part of CI, and WMG has been a strong partner in helping train students as interns for several years. CI and WMG are working to build on their relationship to include even more opportunities like “Relative Justice.” The hope is that the best and brightest media students-turned-professionals can have a storied “Hollywood” career right here in their home state.

In the Lexington area, “Relative Justice,” airs on the CW Network Mondays through Fridays at 9 a.m. EDT. For more information, please go to www.relativejustice.tv.