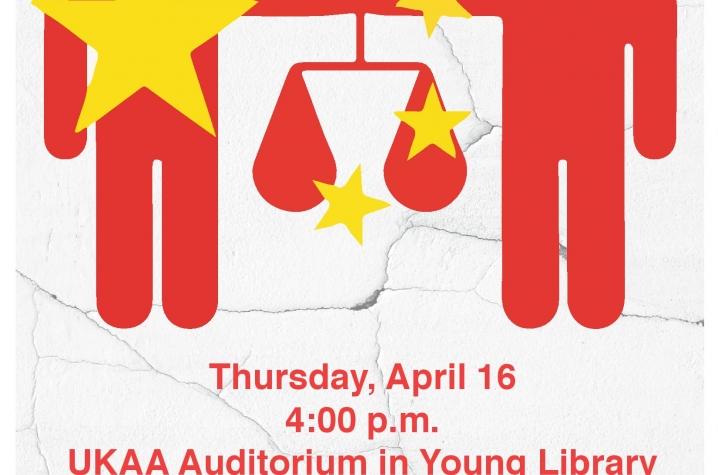 LEXINGTON, Ky. (April 13, 2015) — A panel discussion regarding human rights in China will be held at 4 p.m. Thursday, April 16, in the UKAA Auditorium in William T. Young Library.

As noted by Susan Carvalho, associate provost for internationalization, human rights issues encompass all aspects of society, including higher education.

“U.S. universities are meant to be open venues for intellectual exchange, so the questions many U.S. universities are exploring are: how do those U.S.-operated campuses function in China, can they house the kinds of open debate that many Chinese and U.S. scholars want to see, and how should we best work with our counterparts there as UK establishes partnerships and build on initiatives with our collaborators on the other side of the world,” Carvalho said.

The panelists will also discuss recent U.S. media articles that focus on China’s President Xi Jinping’s reaffirmation of principles of Marxist thought, which seems to be closing doors to the outside world by encouraging scholars to support official government perspectives. Even more significantly, the silencing of protest voices raises concerns about human rights more broadly. How do our own scholars think about these questions, and how would they advise us about whether and how to engage with the world’s most populous country?

Jianjun He, assistant professor of Chinese studies at UK, received his Ph.D. in Chinese literature from the University of Oregon in 2007.  After graduation, he taught Chinese for more than 20 years at the college level in China and the United States.  Before coming to the University of Kentucky, he served as the academic director of the Chinese Flagship Program at Western Kentucky University. He is also the director of the KIIS (Kentucky Institute for International Studies) China summer program. He has led study abroad programs to China and has given lectures to graduate students studying Chinese literature at Northwest University and Shaanxi Normal University in Xi’an and Nankai University in Tianjin.

Douglas Janoff, diplomat in residence in the Patterson School of Diplomacy and International Commerce, is a senior Canadian Foreign Service officer currently on sabbatical from his position. He has worked as senior policy advisor in the Mexico and North American Relations Division and as western hemisphere policy analyst in the International Crime and Terrorism Division. He has also participated in electoral observation missions (most recently the 2013 Ecuador presidential election). Janoff has held positions with Canada’s Department of Public Safety, Health Canada and the Department of National Defense. His most recent assignment was as alternate representative in the Permanent Mission of Canada to the Organization of American States in Washington, D.C.

Tom Janoski, professor of sociology in the College of Arts and Sciences and director of the Quantitative Initiative in the Policy and Social Science, is currently working on a book to be titled "Citizenship in China," that will extend his work on applying citizenship and civil society in industrialized countries to China and its international context. The book builds on his "Citizenship and Civil Society" (Cambridge University Press, 1998), which has been translated into Chinese and sold in China since 2001, and "The Ironies of Citizenship" (Cambridge University Press, 2014). The current project compares the U.S. and China, but puts each country into the citizenship context of similar countries. His research interests also focus on immigration and naturalization in advanced industrialized countries.

“It is too easy, with the stories we receive in the media, to think we have the answers around global poverty, inequity, social justice, political reform,” said Carvalho. “What we hope to help students learn through these panel discussions is a greater awareness of the complexity of the problems, and the intellectual sophistication and cultural depth that it takes to propose real solutions.”

The panel discussion is hosted by the UK International Center, which leads internationalization efforts at the University of Kentucky with the support of the International Advisory Council, a group of faculty and administrators representing each of the university’s 16 colleges plus other key academic units.