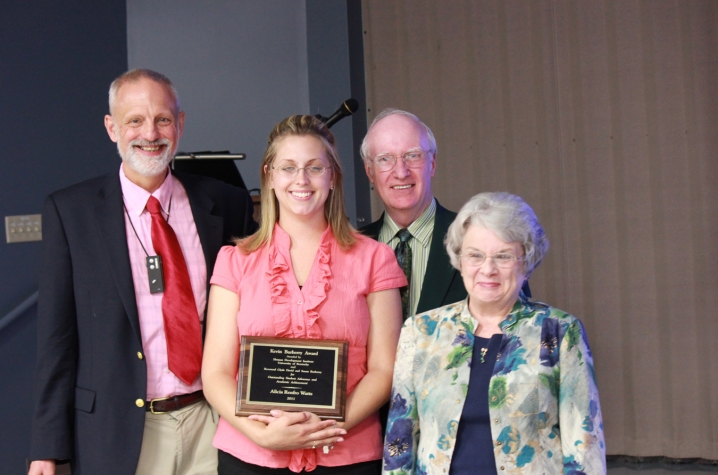 The award, given annually since 2004, goes to a student who demonstrates exemplary leadership and advocacy in working with children, youth or adults with developmental disabilities. Candidates for the award must be associated with the institute through graduate certificate, research assistantship, practicum or another significant involvement.

In what HDI calls the strongest competition in the history of the Burberry Award, this year's finalists included Watts; Rachel Aiello, a doctoral student in school psychology; and April Holman, who recently received her master's degree in speech/language pathology.

"Alicia Renfro Watts not only exemplified academic excellence, personal advocacy and leadership characteristics in her academic coursework, but most importantly, in her day-to-day activities on behalf of one of HDI’s own employees, who himself has a disability," said Harold Kleinert, executive director of the institute and professor in the Department of Rehabilitation Sciences in UK's College of Health Sciences.

Watts is well known to many at the institute through her support of long-term HDI employee Bill Mazzoleni. Watts has worked with Mazzoleni since the spring of 2009 as a daily support provider with the Close to Home agency. Watts graduated in May with honors from Midway College with a Bachelor of Science in health care administration.

"Alicia conveys esteem and respect for Bill; she promotes his growth, learning, choices and self-advocacy, and advocates for support and full access in work, recreation and relationships throughout his community," wrote one of the 16 HDI employees who nominated Watts. "Indeed, these are the very principles that HDI stands for."

Watts focused her research projects and other assignments in her college coursework on issues related to transition, family resources, community living and employment for persons with developmental disabilities. Along with various academic achievements, she co-presented with Mazzoleni as part of the HDI Supported Employment Training Project, as well as the Graduate Certificate class. These presentations focused on the way in which Mazzoleni and Watts worked together and how Watts supported Mazzoleni across environments. Although Watts initially hoped to be employed in the health care field after graduation, she is now considering a career in the field of developmental disabilities.

"Working with Alicia has improved my level of self-empowerment," Mazzoleni said, "and when I need to advocate for myself, I can."

The Human Development Institute works to improve the lives of individuals with disabilities. Its mission is to promote the independence, productivity and inclusion of people with disabilities and their families throughout the life span. The institute is a unit of the UK Office of the Vice President for Research and a member of the Association of University Centers on Disabilities (AUCD). For more information, visit the HDI website.