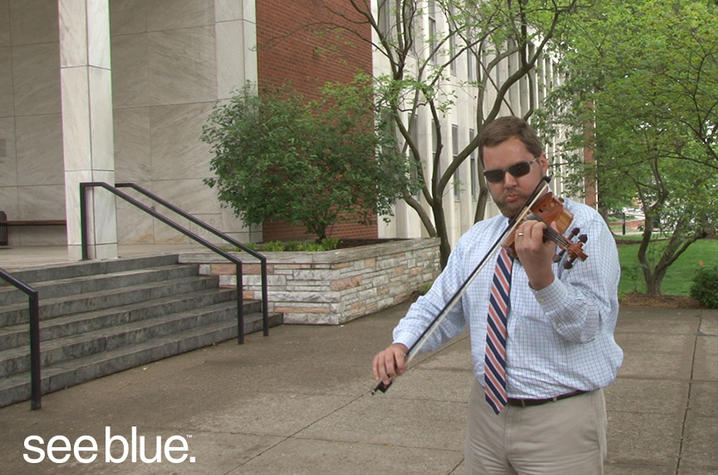 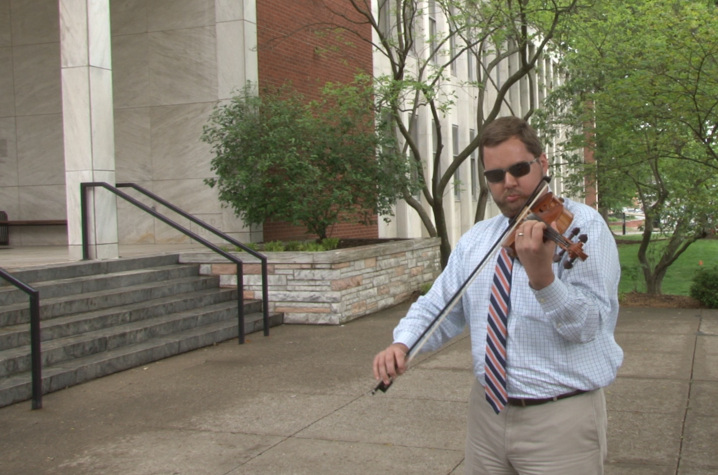 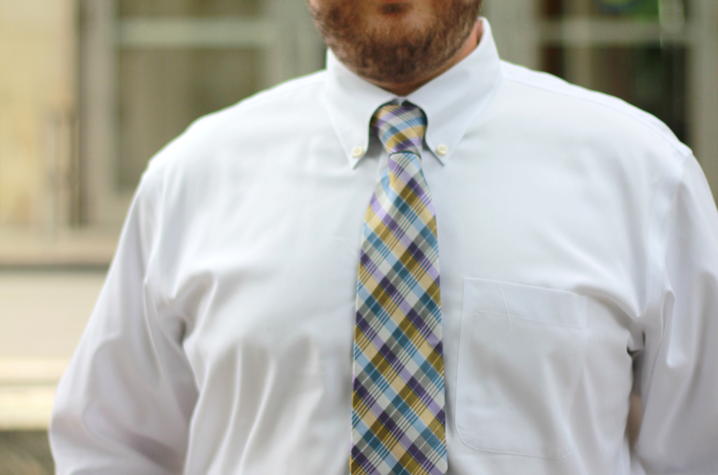 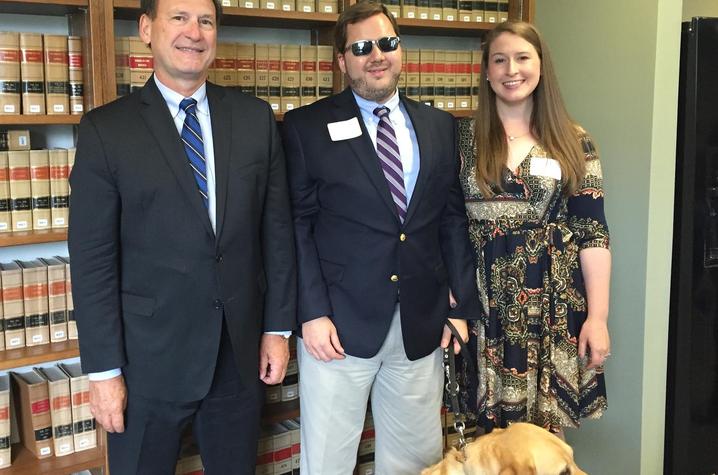 Video Produced by UK Public Relations and Marketing. To view captions for this video, push play and click on the CC icon in the bottom right hand corner of the screen.

LEXINGTON, Ky. (May 3, 2016) — Intricate patterns of notes and rhythms coming together to form a beautiful piece of music isn't magic — it's an amazing analytical framework, according to Chris Stewart.

And to study and practice music means to critically analyze and think creatively to conquer new challenges. So when people ask Stewart how he made the transition from being a professional violinist in Los Angeles to studying law at the University of Kentucky, it's not hard for him to connect the dots.

"When I took the LSAT, I did logic games and these games had multiple factors you had to keep in mind with certain rules," said Stewart, a graduate of the California Institute for the Arts and a May 2016 graduate of the UK College of Law. "I assigned each of them a note in my head and let them build a chord so that I wouldn't forget them."

The Owensboro, Kentucky, native was known for his versatility with the violin — bluegrass, reggae, Eastern European — and "even used an electric violin and pedal board to create music for an award-winning zombie movie."  But after becoming disgruntled with the music industry in LA, he knew it was time to rekindle some old loves — political science, government and law.

"I was always aware and concerned with social justice issues," he said. "To become the best advocate I possibly could, I knew legal education was the best way to go."

What he didn't know was where to start that journey. He applied to numerous schools, but it was an act of Franklin Runge, faculty services librarian and then interim director of admissions, that made UK stand out among the rest. Before sending an acceptance letter to Stewart, Runge remembered what Stewart noted in his application essay — he is blind.

So instead of mailing the letter, Runge called Stewart up and asked if he'd rather receive it by email, allowing screen reading software on his computer to read it aloud to him.

"That kind of personal attention and attention to detail was huge," Stewart said.

"Legal training instills in you a sense of fairness and a desire to communicate clearly," Runge said. "In working with Chris, I wanted him to know that he will be part of the UK Law family, and that if he is willing to come here to learn, we are willing to do what it takes to make him successful. So many members of the faculty and administration stepped up during the summer before Chris’s arrival to ensure a smooth transition."

It was later at an event with the incoming fall class that Stewart and his wife, Emily, met Dean David Brennen.

“When I met Chris, I instantly knew he was the kind of person who turns obstacles into opportunities,” Dean Brennen said. “He has already made a lasting impact on the law school community, doing more for us during his time here than we could ever do for him.”

Stewart is accustomed to people asking to pet his trusted guide dog, Baron, and proceeding to pat Baron lightly on the head. He was quite surprised though when Dean Brennen descended to the floor for a full-on hug with Baron, wrapping his arms around the large, friendly English lab.

"We drove away from that knowing UK was the place for me," Stewart said. "I've been treated better here by far than anywhere else; the decision was easy."

Since arriving at UK, Stewart has taken hold of every opportunity to mold himself into the advocate he yearns to be. In his last year, he has served as president and senior editor of the Election Law Society; co-president of the American Constitution Society for Law and Policy student chapter at UK; and a member of the Kentucky Law Journal (KLJ), UK's flagship law review.

"But," Stewart said, "What is most important to me is that my example allows for future blind students to serve on KLJ."

In those roles he not only gained experience solving real world problems within the practice of law, but he also picked up practical skills in practicing law as a blind person. How to tell down to the letter and the punctuation mark that articles and briefs are exactly right; which words are italicized and which are bold — "those nit-picky, fine-point aspects of legal research and writing."

Using advanced screen reading software, going line by line and character by character, Stewart knows every detail of every character in documents he's worked on.

"I've been listening to this (screen reading software) since I was five or six years old, so I have it at such a fast speed that I can complete all this in the same amount of time as someone looking at the document," he said.

As for how he handled not only excelling in his courses but also extracurricular activities Stewart said he just became involved in things that interest him, such as election law and employment law. Plus, law school is really good at teaching time management.

"You learn a lot about how to make the most of your day," he said. "And if everything I had to do felt like work, putting in 12 to 14 hours a day would be a lot harder."

Besides the invaluable practical experience and exposure to top-notch legal scholarship, Stewart has also had the opportunity to connect with blind students heading to law schools across the country. During his first year at UK Law, he joined a blind law mailing list and has since been part of a tight-knit network of blind college students, law students and lawyers.

"It's especially cool when a blind senior reaches out to me and then later I hear about them being accepted into law school," he said.

And when they do reach out, he often tells them "no one should ever think of their disability as a characteristic that defines them." But having said that, he encourages students to make sure they address their situation with prospective schools and explore which schools can meet their needs. He points to a UK Parking and Transportation Services pilot program that assists students with mobility issues and the Disability Resource Center as examples of support from UK.

But perhaps the best support Stewart has received has been from his friends, his classmates.

"They have been absolutely incredible — any time I've needed anything or had an issue arise, there's always been a fellow student there to help," he said. "It's been an incredible blessing to be surrounded by so many thoughtful, intelligent and courteous people, and I will miss all of them terribly."

Runge said the class of 2016 is an interesting cast of characters that span political views, socioeconomic background, musical tastes and favorite restaurants.

"Chris (and Baron) are part of the constellation of amazing graduates," he said. "They are part of the UK Law family, and it will be fun in the years to come to catch up with Chris at alumni events and hear about his future triumphs in the profession."

What's next for Stewart, besides graduating with his law degree this Friday? A federal judicial clerkship, a prized position for graduating law students and a key stepping stone for a successful legal career. Stewart will work closely with a federal judge, learn the ins and outs of the judicial system and put his legal writing and research skills to work over the next two years.

He'll be busy, to say the least. But he won't leave his music behind. He still plays every opportunity he gets, often with his wife Emily.

"I've deconstructed judicial opinions that stood for a particular rule of law in the same way that I would deconstruct a symphony … I will always be a musician."

This week, UKNow is featuring stories about our May and August 2016 graduates who will participate in the May 2016 Commencement Ceremonies this Sunday, May 8, at Rupp Arena. Undergraduate ceremonies will take place at 9 a.m. and 2 p.m., and the Graduate and Professional ceremony will take place at 7 p.m. More than 2,400 undergraduates and approximately 500 graduate and professional students are expected to participate, marking the largest Commencement in UK's history. Overall, more than 3,200 undergraduate and 1,500 graduate and professional degree candidates have been submitted to the UK Board of Trustees for approval. For more information, visit www.uky.edu/commencement