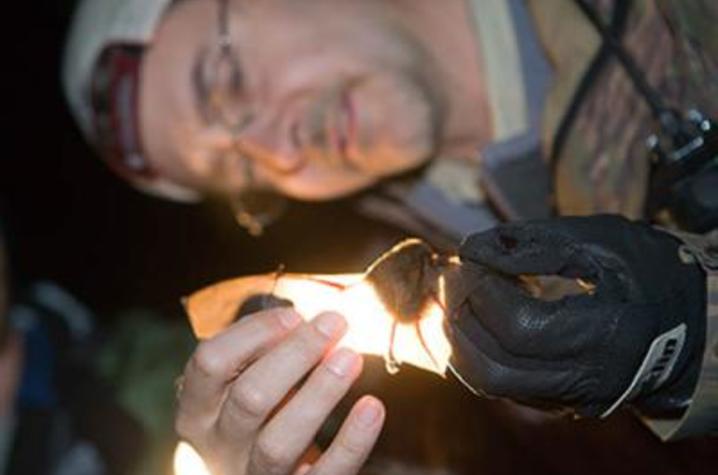 LEXINGTON, Ky., (Oct. 28, 2016) — Thousands of bats lie, heaped high on cave floors, sometimes as many as 10,000 at one site. Fragile, winged mammals that have succumbed to the ravages of white nose syndrome and dropped, flightless, from their roosts on cave ceilings. Biologists report coming upon this tragic scene and finding, among the piles of tiny corpses, living bats, struggling to survive hibernation by burrowing among the bodies of their colony for residual warmth.

“For those of us who expend our entire career working on them, like I have, it’s pretty heartbreaking,” said Mike Lacki, professor of wildlife ecology and management in the University of Kentucky Department of Forestry.

White nose syndrome is decimating native bat populations in the Eastern United States and Canada. Since 2006, when the evidence of the disease first showed up in North America, millions of bats have died when the cold-adapted, white fungus, Pseudogymnoascus destructans, infected the skin of their muzzles, ears and wings during the critical hibernation period. The U.S. Geological Survey estimates that bat populations in the Northeast have declined by 80 percent. In Kentucky, populations are declining at a similarly terrifying rate, Lacki said.

“These bats play a fundamental, ecological role, and anyone who’s gone into a white nose-affected cave and has seen the mass mortalities, it will get to you,” he said.

Lacki is not about to sit back and watch these creatures pass into oblivion. He and co-principal investigators John Lhotka, UK associate professor of silviculture, and Jeff Stringer, UK extension professor of hardwood silviculture and forest operations, are taking progressive measures to attempt the re-establishment of bat species. With the support of cooperators, the Kentucky Department of Fish and Wildlife Resources and the U.S. Fish and Wildlife Service, their study began in May 2015. The crux of the multi-year project is to investigate three forest management procedures to determine which, if any, will provide the optimum environment for the survivors of white nose syndrome to successfully raise their young and begin to rebuild the populations.

Though many bat species spend colder months in caves, many species, such as the northern long-eared and endangered Indiana bats, actually use forests for summer roosting and rearing young. Both species, native to Kentucky, have been severely impacted by the disease. In 2015, the U.S. Fish and Wildlife Service listed the northern long-eared bat as threatened under the federal Endangered Species Act.

“The northern long-eared bat was very common at one time and easily captured across forested landscapes during capture-and-release studies,” Lacki said. “That is no longer the case. It is one of the species that has been probably hit the hardest.”

Bats’ ecological importance cannot be denied. They serve as the major predator of many pest species, such as mosquitos, beetles and moths that negatively impact agricultural crops and forest trees during their larval stage.

“If you take bats out of the equation, there will be repercussions, either in reduced yields and an increased need for pesticides on farms or through burgeoning moth pests that might lead to increased levels of mortality of some tree species in our forests,” he said.

The research team is collecting data on three treatments at each of three sites in Eastern Kentucky: Kentucky Ridge State Forest in Bell County, private land in Breathitt County and Robinson Forest, the UK College of Agriculture, Food and Environment’s research and education forest. The replication derived from multiple sites will help them draw conclusions at the end of the project that could be applied to a wider geographic region.

Lhotka, Lacki and Stringer collaborated to develop treatments using variable retention harvest methods. There is an intact control site at each location. The other two treatments will retain the large trees that bats prefer for roosting and raising young, either disbursed in a uniform pattern throughout the landscape or aggregated into clusters. Through reduction of the forest canopy, spaces will open for bat foraging areas and flyways, and more sunlight will reach the tree trunks, allowing for greater thermal regulation — sunlight on heat-retaining large trees will warm the young nestled in cavities or beneath the bark. The methods should also produce greater insect diversity that is beneficial to both the bats and the landscape.

“We’re trying to maintain residual trees that have characteristics that are favorable to bats. Bat habitat is the direct consideration in this study,” Lhotka said.

“Let’s face it, we are still dependent on wood,” Lacki said. “Knowing that logging will occur to maintain our society’s infrastructure, the next step then is how can we change the way we do it to a more environmentally harmonious way?”

From April through September over the next two or three years — longer if possible — the research team will track the bats by acoustic detectors set out among the trees to record their calls. Some bats will carry small transmitters, as well. With the data they collect, they will be able to match the patterns derived from the bats to each particular site, thereby determining the best management practice for bat habitat.

“The crisis we’re facing with bats is as real as we’re portraying it,” Lacki said. “I used to see bats coming out of the forest all the time where I live. When dusk got to a certain point, my son and I would stand on the driveway and, whoosh, you’d see them just shooting out of the trees. We don’t see them at all anymore. I put my acoustic detector out and — nothing. They’re just not there. There have been more lost, I think, than we probably realize.”