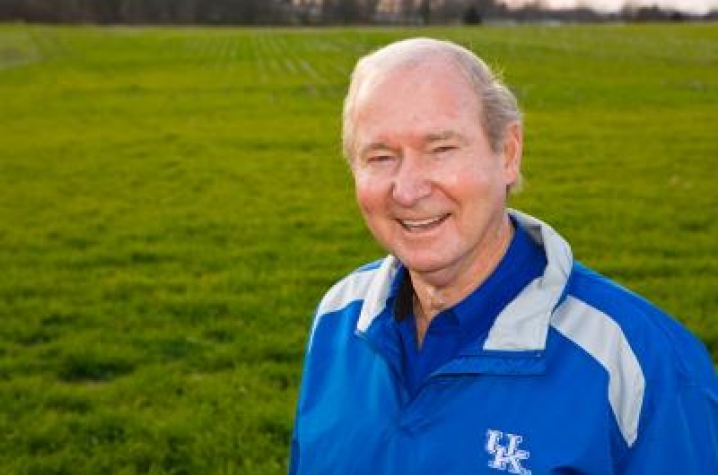 PRINCETON, Ky., (July 28, 2016) — Over the past four decades, Lloyd Murdock, University of Kentucky extension soils specialist, has helped farmers across the state and region improve their operations. His efforts have not gone unnoticed.

Murdock recently received the Service to American/World Agriculture Award from the National Association of County Agricultural Agents during their annual conference in Little Rock, Arkansas. It is the highest award given by the organization and recognizes the winner’s major contributions to agriculture.

Murdock was nominated by Curt Judy and Darrell Simpson, agents with the UK Cooperative Extension Service.

“Lloyd is a wonderful specialist, and he continues to do very practical work that’s at the heart of what farmers need,” Judy said. “He is, and has always been, a farmer’s scientist.”

“I remember being a young agent working with Dr. Murdock on a poultry litter study here in Muhlenberg County and learning so many things from him,” Simpson said. “He truly impacted my life, just as he has done for so many agents and farmers alike in Western Kentucky.”

Murdock’s research findings serve as a foundation for many agronomic practices farmers currently use.

Early in his career with the UK College of Agriculture, Food and Environment, Murdock was part of a team of specialists who worked to understand the cause of grass tetany in beef cattle and discovered a way to prevent it. Their recommendation of feeding magnesium to cows on pasture resulted in an immediate 90 percent reduction in the disorder and is a practice cattle producers continue to use today.

Since the 1980s, Murdock has worked to make no-till wheat a viable option for farmers in the state through his role in UK’s Wheat Science Group. His research on nitrogen fertilization of no-till corn made applying nitrogen more cost effective and environmentally friendly for farmers in the South and Midwest.

Other notable accomplishments include conducting supporting research behind the development of the most common penetrometer farmers use to measure soil compaction and developing an algorithm for making variable rate nitrogen applications. Most recently, he is part of a team working on a solution to break down the fragipan layer found in many Kentucky soils. This hard layer is one of the biggest limitations to yields in the state.

“I have always tried to go above and beyond agents’ and farmers’ expectations to give them the information they need in a timely manner,” Murdock said. “Serving people and doing practical research that made a difference in people’s lives has always been important to me.”