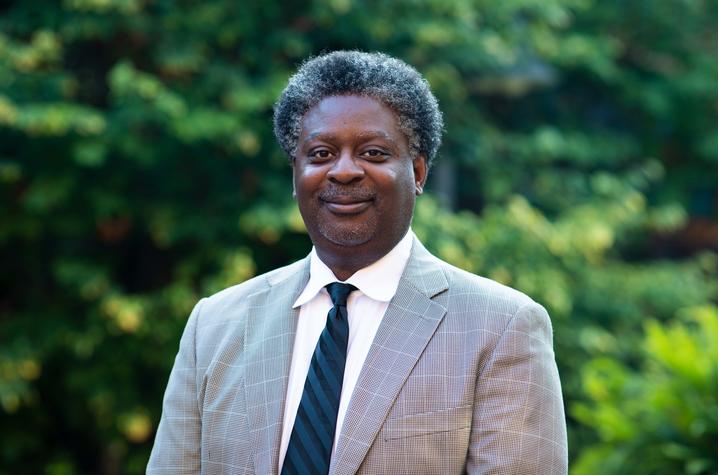 In the fall of 2019, Bertin Louis joined the UK family with a purpose — to help undergraduate students find theirs.

LEXINGTON, Ky. (March 4, 2020) — Bertin Louis Jr. has received a prestigious position that is giving him national exposure. The director of undergraduate studies for African American and Africana Studies (AAAS) and associate professor of anthropology in the College of Arts and Sciences at the University of Kentucky has been named editor of “Conditionally Accepted.”

The Inside Higher Education column serves as an online space for scholars on the margins of academe. “I have drawn a lot of excellent advice from this resource,” Louis said. “It has helped me navigate higher education and push myself to further develop an ethic of care in the classroom, associations, programs, departments and universities where I’ve served.”

“Conditionally Accepted” was created as a freestanding blog in July 2013. It has steadily grown since — becoming a career advice column for Inside Higher Ed in January 2016. The goal of the column is to provide coverage of current events in the area of diversity in higher education — highlighting marginalized authors and publishing works that connect personal experiences with broader disciplinary literatures.

“Venues such as 'Conditionally Accepted' will help us all through these challenging times, especially for any of us at institutions that are slow to attend to the needs of marginalized scholars,” Louis explained.

In the fall of 2019, Louis joined the UK family with a purpose — to help undergraduate students find theirs.

Louis was a sophomore at Syracuse University when he was confronted with choosing a major. A friend recommended he take an introduction to cultural anthropology class. Louis came away from the class with an idea that would inform his future work and the way he would come to view the world.

“The most provocative idea that stuck with me from the course was that race was not rooted in biology and was actually a social construction with real-world implications.”

After declaring anthropology as his major, Louis took another class that helped him deepen his understanding of his Haitian heritage. “I took a class called Caribbean Society Since Independence with a brilliant Jamaican political scientist by the name of Horace Campbell, who opened a world of critical thinking to me through Africana Studies.”

The ideas presented to Louis by the first book the class read, “The Black Jacobins: Toussaint L’Ouverture and the San Domingo Revolution,” had a deep and indelible impact.

“To know that I was descended from enslaved Africans, who led a major and successful slave revolt, filled me with a lot of pride to combat my previous inferiority complex.”

Louis’ education led him to better understand both his surroundings in the present and his upbringing. “My ongoing education has helped me realize that racism, both institutionalized and raw, was a part of everyday life in Staten Island — from the raw bigotry of being called the ‘N’ word on an almost daily basis to it being an intrinsic part of the curriculum of the schools I went to and how racial hierarchy operates in the place I grew up and elsewhere in the U.S. and beyond,” Louis said.

Ultimately, Louis has realized how important it is to encourage, influence and maintain diverse and inclusive spaces in academe when in a position of power. “I have strived to do that through leadership and mentoring,” Louis said. “And that is why I am especially proud and honored to be the new editor of ‘Conditionally Accepted.’”