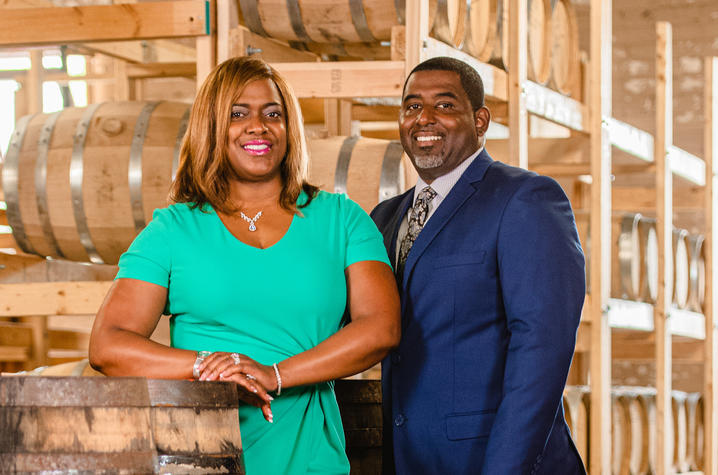 LEXINGTON, Ky. (Feb. 14, 2021) — The bourbon business is a Kentucky trademark, and a University of Kentucky alumni couple is beginning to make their mark on the industry.

Tia Edwards, a 2001 integrated strategic communication graduate from the College of Communication and Information, entered the world of spirits by helping found a bourbon distilling company. In 2017, she started Fresh Bourbon with her husband, Sean Edwards, a business management graduate from the UK Gatton College of Business and Economics. Together the Kentucky natives are hoping to put a new spin on a local tradition while also reaching some historic milestones.

“People in bourbon are big on age,” Tia Edwards said. “‘Fresh Bourbon’ is not an age statement — it is a fresh approach to an older industry.”

The couple came up with the idea to start their company through the people they met on their travels. They were constantly told that Kentucky was known for three things: KFC, horses and bourbon. According to the Kentucky Distillers’ Association, bourbon adds $8.6 billion in economic impact annually, and 95% of the world’s bourbon is produced in Kentucky. After learning this, the couple decided to try their luck in the industry.

What they found was that the bourbon business was tough. However, instead of leaving the industry how they found it, they took this as a challenge to change it from within. Combining her love of public relations, communications and advertising with her more than 20 years of sales experience, Tia Edwards was ready to tackle branding and marketing a new and unfamiliar product in a well-established space.

What makes Fresh Bourbon different from its competitors is its recipe and flavor profile. While most bourbons use three-grain recipes, Fresh Bourbon uses four: corn, honey malt, malted rye and malted wheat. Although it isn’t a honey bourbon, this bourbon has a honey flavor thanks to its unique blend. It can also be enjoyed however the drinker pleases, as the Edwardses didn’t want to tell patrons how to enjoy their bourbon.

While the couple was focused on making a good product, they unknowingly made history in the process. In February 2020, Fresh Bourbon was recognized by the Kentucky Senate as "the first Black-owned bourbon distillery in Kentucky" and that the distillery "produces bourbon with an African American Master Distiller, the first in Kentucky since slavery."

“It’s that big of a deal to make an impact because it’s not only for us and our children but for other people that came before us that didn’t get recognition,” Tia Edwards said. “We’re benefiting from slaves that worked and never got the recognition they deserved. It is such an honor to have that recognition.”

Like other businesses, the pandemic took a financial toll on the up-and-coming company. They had to push back their plans of breaking ground on their 34,000-square foot downtown Lexington distillery for later this year. Tia Edwards estimates it will take between 18 and 24 months to complete the build which will lead to 25 new jobs. Currently, Fresh Bourbon is being distilled at Hartfield & Co. in Bourbon County, Kentucky.

Despite the setbacks they faced, the Edwardses had a successful pre-sale campaign that saw support from across the country. They have even had bottle signings across the Commonwealth to meet their customers. To expand on this, they’re opening a downtown tasting room in March that will give the Fresh Bourbon experience while they wait to carve out their own space in Lexington’s liquor scene.

If you would like to learn more about Fresh Bourbon, visit www.freshbourbon.com.