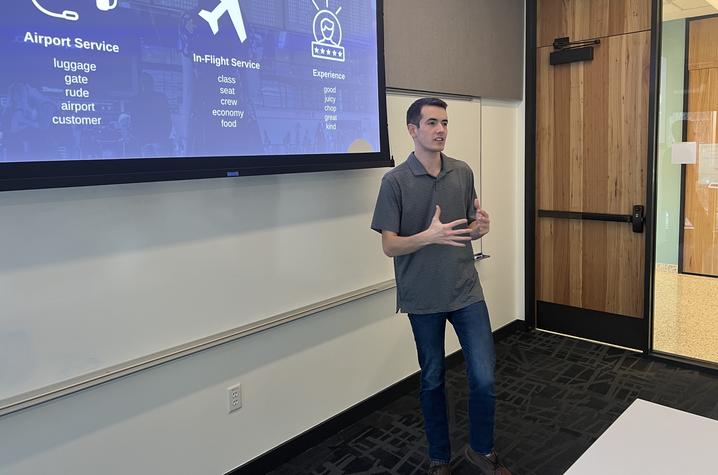 LEXINGTON, Ky. (March 10, 2022) — After cementing his passion for information technology during his undergraduate career, a University of Kentucky College of Communication and Information and Gatton College of Business and Economics alumnus has secured a spot at one of the biggest names in tech — Google.

Matthew Luce, a 2021 information communication technology (ICT) and marketing graduate, will be joining the Google Cloud Team as a cloud technical resident in June 2022. Following his graduation from the University of Texas at Austin McCombs School of Business, he will be working and living out his childhood fantasy at Google’s office in Austin, Texas.

“I remember my dad taking me to work, and we would pass by the server room and when I was growing up, I would always talk to the IT guys,” Luce said. “I was always interested in how that stuff worked and kind of how I could bring that home and set up a mini version of it myself.”

For years Google has consistently been rated by Fortune as the United States’ Best Company to Work For. Google’s parent company, Alphabet, is also in Fortune’s top 10 largest U.S. companies and top 25 largest global companies. For techies like Luce, working for Google is a significant career milestone.

Luce’s road to the tech giant started at Amsted Rail the summer before college. Interning there was just meant to get his foot in the door for IT, but it turned into a five-year affair that set the tone for his profession. Despite management being his primary major, ICT was where his true passions lay.

But even before finding a home with ICT, Luce joined the Student Activities Board (SAB). Throughout his tenures as SAB’s director of media, director of information technology and vice president of promotions, he not only carved a place for himself on campus, but he helped make the campus a better place for others as well. By instituting tech innovations like mass text message promotions, moving SAB to a higher capacity hosting server and adding closed captions to events, Luce helped give students more opportunities to be involved in campus activities.

“Accessibility is something that in college became really important to me and really relevant,” Luce said. “The reason it became so important to me was that I realized I was very homesick when I came to Kentucky. I lost a lot of weight; I wasn’t enjoying it. Then I joined the Student Activities Board and that really changed my experience. And I am a fully-abled person. How do these experiences vary for people with varying levels of ability? How can we capture these groups that don’t have the same abilities and have different experiences so that they’re still able to interact with our events?”

Connecting with others through technology was one of the main reasons why Luce was attracted to his ICT major. Unlike computer science or engineering, interacting with people is at the core of ICT. In fact, human psychology plays a large part in cyber security, one of the main IT subcategories and one of Luce’s two passions in IT.

Had it not been for a cyber security class with CI Professor Sherali Zeadally, Luce might have missed out on discovering his interest in the large subfield. He also might not have been as prepared for his career moving forward. He credits Zeadally’s difficult but insightful classes for where he is today.

"Matthew took several ICT courses with me,” Zeadally said. “He has always been diligent, hardworking and dedicated to these courses. He would always aim for the highest score possible in any quiz or exam and would never settle for less. He seeks perfection and likes to seek advice where he needs it. I am sure he will excel in whatever he does in the future."

Luce’s other passion, infrastructure, is what he will be working on at Google. The Cloud Technical Residency is a year-long position that goes through three rotations. For the first four months, Luce will be trained on Google systems. For the second four months, he will work in customer engineering acting as the liaison in pre-sales. For the final four months, he will work as a technical account manager, again acting as a liaison but this time in post-sales. Following his year-long tenure, he will transition into one of the two previous positions in a permanent role.

While Luce is excited to start his journey with Google, he’s even more excited about the prospect of what he can accomplish there. With the company’s “20% time” rule, where employees are encouraged to use 20% of their work time on innovative passion projects, Luce plans to dedicate his efforts toward making Google more accessible, carrying on the work he started at UK. It is his hope that his work will continue to help make the internet a more welcoming place for all.