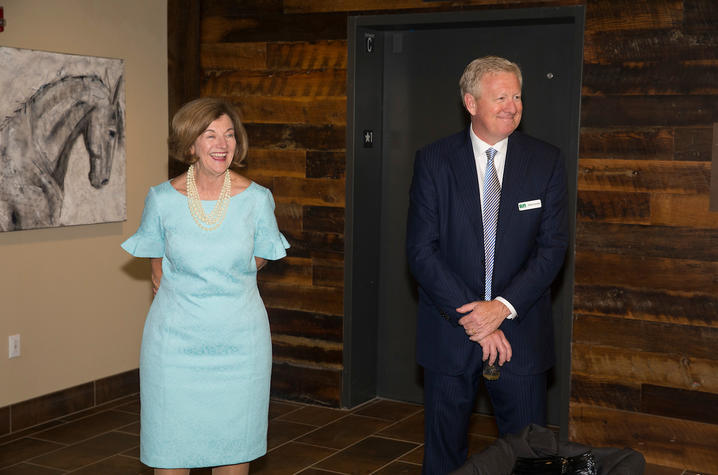 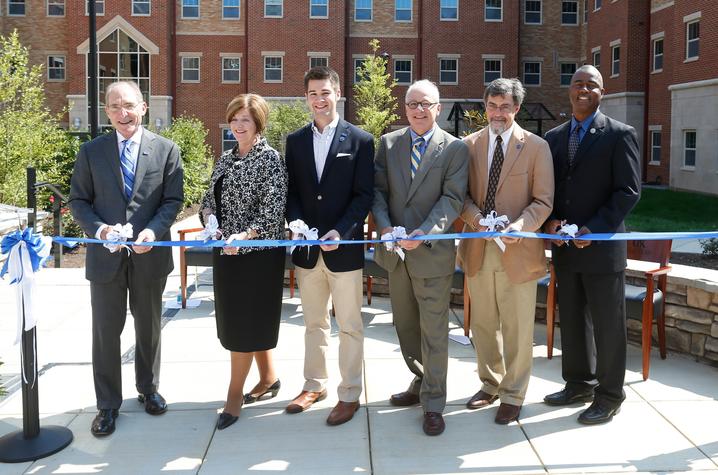 LEXINGTON, Ky. (April 27, 2022) — Penny Cox’s grandmother used to say, “the best insurance policy you can ever have is an education. No one can take it away.”

Cox has seen proof of this statement thousands of times over as she has witnessed students from every walk of life come to the University of Kentucky and see that degree change their life and often the socioeconomics of their whole family.

It was nearly 50 years ago on Oct. 2, 1972, when Cox, a first-generation student, first came to UK as a clerk and typist for $1.85 an hour working in the Career Placement Center located on the second floor of the Mathews Building.

Cox had grown up in Barbourville, Kentucky, where she went to a one-room school in first through eighth grade before graduating from Knox Central High School a week before her 16th birthday.

At UK she has had 14 different jobs and has worked in seven different buildings on campus – working in a few of them more than once.

One of the most pivotal moves in her career was in 1975 when she went to work for John Smith, then the vice president for minority affairs.

Cox had gone to Cumberland College — now the University of the Cumberlands — for about a year and a half after high school and before moving to Lexington but hadn’t finished her degree. She says all that changed when she worked for Smith. “Everyone that worked for him got at least one degree,” she said. Smith, who Cox considers a mentor, thought she and others in the office should set goals and take advantage of the educational opportunities around them – literally at UK.

And so, she did.  She received a bachelor’s degree in Arts and Sciences and a Master of Business Administration taking two courses at a time while working full time. She also paid for the classes since the employee education program which now pays for up to two classes per semester for full-time employees or their dependents, was yet to be implemented. However, years later in 2001, under President Lee T. Todd, she would chair the career advancement and professional development committee that recommended the EEP program.

“Receiving help in furthering your education is one of the greatest benefits you can get anywhere, and it makes sense in higher education that we make that investment in employees,” she said.

After receiving her degrees, Smith urged Cox to move on from her clerical position to her first professional post at the university and she became a senior accountant in what is now Facilities Management.

As she continued to move up and around the university, Cox held the position of Housing Director from 1987 to 1991, and then from 1991 to 1999, she was an assistant dean overseeing finance in the College of Dentistry.  “When I got to dentistry, my unit had no computers and were still registering patients in an appointment book and billing patients using paper cards,” she said, adding that her predecessor relied on a 10-key adding machine and 13-column green paper to balance the books. Before leaving her post there, she was able to implement a computerized patient registration and billing system.

Her experience in implementing computer systems led her to her next position back on main campus as institutional staff officer and eventually, associate vice president for information technology, where she was integral in overseeing the contract and implementation of SAP, a four-year endeavor.

It was during this time that one of the most memorable and devastating events occurred at UK.  On a Tuesday afternoon on May 15, 2001, the UK Administration Building – now referred to as the Main Building, became engulfed in flames. Cox was working at her desk and when the alarm sounded, she first thought it was a false alarm or at least a minor incident.  “They said we had to evacuate and had I known how bad the fire was, I would have taken more belongings, including my diplomas and computer,” she said. “We all stood outside just watching as they (firefighters) carried out the portraits of former presidents trying to save some pieces of history.”

The fire started from a construction worker’s blowtorch during renovations destroying the roof and much of the third floor although water damage was throughout the building.

“Standing there on the lawn, we started putting together a team and mobilizing to have a new site for the President’s and senior leadership offices by the next morning,” she said. IT crews and many others worked throughout the night and by 8 a.m. the next day makeshift offices were put together for operations on the 18th floor of the Patterson Office Tower.

It was more than three years before the building re-opened.

It was about this time that Cox decided she would retire after her 40th year in 2012 and began making plans for her next transition in life.

However, the university — and President Eli Capilouto who had arrived and began his post at UK in June 2011 — had other plans for her.

Within a few months of arriving on campus, Capilouto envisioned and embarked on a project with the Board of Trustees to revitalize and transform housing and the residential experience on campus. They needed someone to be the point person for a short-term public/private housing project to build two new residence halls that would add 600 beds.  “I was asked at 7 p.m. on a Friday night if I would take the job – but that I needed to start it on Monday,” she said.  “Needless to say, there was no turning it down.”

Today, Cox reflects on that decision and her time as a “labor of love.” What started as a project for two buildings soon became the construction of 14 new residence halls with an addition of 6,850 beds on UK’s campus.  The $450 million housing project was a component of the university’s $2.3 billion capital transformation that changed the college experience for students for years and years to come, she said.

“Once we started on this path of housing growth, then it was decided to also transform dining as well and The 90 was built complete from ‘shovels in the dirt to food on the table’ in just 11 months,” Cox said.

Today, nearly 10 years after she planned to retire, Cox who was named UK Treasurer in 2020, is approaching her 50th anniversary at UK. However now, retiring isn’t on her mind.  “I’m going to keep working because I still enjoy making a difference,” she said. “I really believe in the mission here and can’t imagine being anywhere else. You can go get a job with an MBA and make a lot more money than at a university, but nothing is as fulfilling as watching students come here and gain the preparation to realize their dreams.”

The benefits open enrollment period for University of Kentucky employees is April 27-May 13. Click the links below to see what's new this year or to learn more about our health insurance plans.